El Salvador’s finance minister defended the country’s strategy to adopt Bitcoin as legal tender even as critics urge the nation to ditch the experiment as the cryptocurrency world suffers through a bear market.

Almost a year into the country’s bet on Bitcoin, Alejandro Zelaya said the digital currency has brought financial services to a largely unbanked population and attracted tourism and investments. While its use as a means of exchange is low, he said he remains a believer in digital money and added the government is still planning to issue a Bitcoin-backed bond using blockchain technology.

“For some, it’s something new and something they don’t entirely understand, but it’s a phenomenon that exists and is gaining ground and will continue to be around in the coming years” Zelaya said in an interview on Wednesday.

The government has purchased 2,381 Bitcoin with public funds, which, today, are worth about 50% less than what authorities paid for them, according to calculations by Bloomberg based on tweets by President . A by the U.S. National Bureau of Economic Research found that most businesses and consumers in El Salvador still prefer to use hard currency to pay for goods and services and send remittances. The has urged the nation to strip Bitcoin of its legal standing. The government is negotiating a $1.3 billion extended fund facility with the IMF, but no deal has yet been reached. 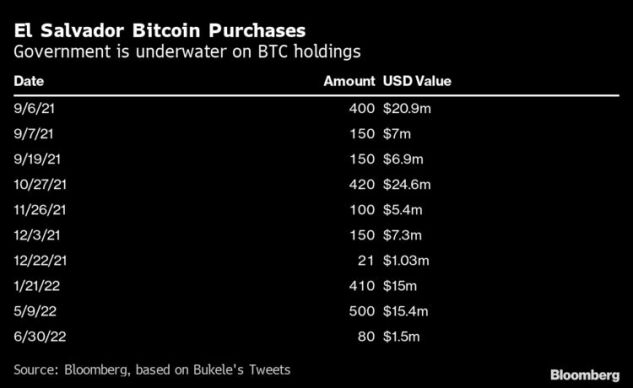 “We aren’t going to have results overnight. We can’t go to bed poor and wake up millionaires.” Zelaya said. “New technologies have shown how people in previous years were afraid of things like websites and digital business, but it’s been shown through time that reality imposes itself.”

Bitcoin’s price dive has delayed the administration’s plans to , but the government still plans to push ahead with the sale when market conditions improve, Zelaya said. He said the government is still moving forward with plans to build “Bitcoin City” and will announce additional Bitcoin-related projects in the coming months.

“I believe in the traditional, international monetary system just as I believe that new technologies are going to help human beings in the future,” Zelaya said. “So, I think making that transition is vital and it would be wrong of us to not pursue financial innovation that could benefit El Salvador.”

To contact the reporter on this story:
in San Jose, Costa Rica at mmcdonald87@bloomberg.net

To contact the editors responsible for this story:
at sishmael@bloomberg.net