The Finance Minister of India, Nirmala Sitharaman, during her announcement of India’s Union Budget 2022, introduced specific proposals to tax virtual digital assets (VDAs), including cryptocurrencies. A VDA is defined to have various elements, many of which are comparable to the definition of “virtual currency” as defined by the Financial Action Task Force in its 2014 report on “Virtual Currencies—Key Definitions and Potential AML/CFT Risks.”

The definition of VDA under the Indian Income Tax Act, 1962 (IT Act) (proposed to be inserted by the Finance Bill, 2022), can be divided into the following parts: 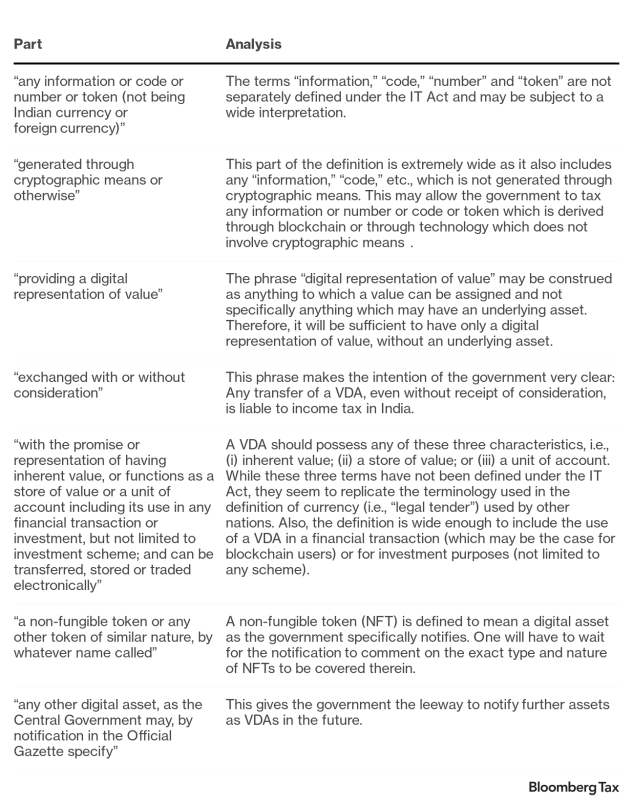 Given the wide sweep of the definition of a VDA as examined above, it is possible that the Indian government wanted to keep its scope flexible enough to include future technologies akin to cryptocurrencies. However, the wide definition, in the absence of clarification, leads to several ambiguities, with the possibility to extend its scope to several electronic/digital transactions/activities which are very different in nature to cryptocurrencies. 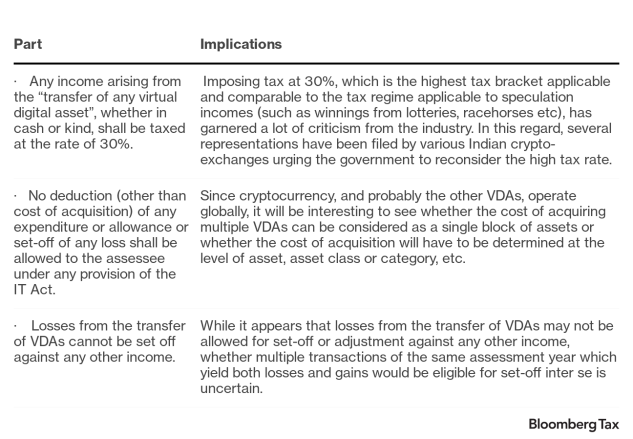 Withholding Tax on VDAs—Section 194S of the Income Tax Act

In order to capture the transaction details, pursuant to section 194S of the IT Act (proposed to be inserted by the Finance Bill, 2022), any person responsible for paying a resident any sum by way of consideration for transfer of a VDA shall withhold an amount equal to 1% of such sum as income tax.

The implications of the proposed tax deducted at source (TDS) and applicability of section 115BBH in scenarios involving a purchaser/seller in India or outside India are summarized below:

Once a new cryptocurrency is created, one of the first steps is to ensure that it is available in the hands of potential users. The distribution of cryptocurrencies can be undertaken in several ways, including through:

To store the cryptocurrency, the user requires a wallet, which consists of one or more digital wallet addresses.

The present proposals with respect to taxation of VDAs may be seen as not specifically taxing the act of storing the cryptocurrencies (without involving the element of transfer).

The next step in the life cycle of cryptocurrencies would be to find potential purchasers or sellers. Typically, virtual currency exchanges (VCEs) are the most well-known mode of exchange where an online service facilitates customers to trade virtual currencies. A less popular mode of exchange is the over the counter (OTC) broker. This involves a process of brokering an “off-market” exchange of tokens in exchange for either fiat currency or for other crypto-assets.

Valuation issues may arise as regards cryptocurrencies traded on VCEs, since their prices vary significantly, depending on the exchange on which they are traded—due to factors such as size of the crypto market, exchange volume, entry price etc., and primarily due to the fact that cryptocurrencies and VCEs are not regulated under any law.

Further, the value of a cryptocurrency for each assessee may be different, depending on which VCE the assessee has traded it. Similar valuation issues arise even in cases of cryptocurrencies traded through an OTC broker. Therefore, guidelines on valuation issues are now eagerly being awaited. Further, in relation to TDS obligations on the buyer, a critical challenge is the modality of withholding income tax at 1% where such a transaction is facilitated by VCEs or OTCs. In such cases, identification of the counter-party is a challenge, and therefore the TDS could become a permanent cost of the transaction.

Disposal of cryptocurrencies may occur in any of the following ways:

Transfer of cryptocurrencies for fiat currency

On a plain reading of the definition of a VDA, a transfer of cryptocurrency for fiat currency would clearly fall within the tax net and be subject to 30%.

The manner of taxation of such a transfer is unclear at present. In the absence of a clear exclusion of an exchange of one cryptocurrency for another, or for another VDA like NFT, one may view this transaction as also falling within the ambit of taxation. Whether there would be taxation at both ends, since both parties would qualify as earning income from transfers of VDAs, will have to be seen.

Transfer of cryptocurrencies as payment for goods or services

This may lead to a situation where the seller/supplier of goods or services would treat the income from the transaction as business income, while the recipient of the goods/services, i.e., the transferor of the cryptocurrency, would need to tax the income from such a transfer at 30%. This issue requires clarification.

Gifts of VDAs are specifically proposed to be taxed in the hands of the recipient. However, it will be difficult to determine the “aggregate fair market value” of a VDA on which the tax is to be borne by the recipient, considering the above valuation difficulties, especially from the perspective of the recipient. Clear guidelines on this aspect will be necessary.

The Finance Ministry is likely to come out with a detailed set of guidelines for officials on the tax treatment of crypto transactions to avoid confusion and litigation. It is to be hoped that the guidelines, while addressing the above areas of ambiguity, also clarify the position in the past, in which assessees have taken varying stands—some treating crypto transactions as capital gains, others as business income, and some not as income at all. It is anticipated that the guidelines should also take an aligned approach vis-à-vis treatment under Indian goods and services tax laws.

The Finance Minister indicated that India’s Union Budget 2022 proposals have neither legalized cryptocurrencies nor prohibited them. The general position in law remains that it is possible to tax an income even if such income is generated out of a business which is illegal. Thus, the taxation of VDAs per se does not lend legitimacy to its trading, and it will be necessary to wait for the final version of India’s Cryptocurrency Bill to understand the legality of the underlying trade.

Stella Joseph is a Partner and Yash K. Desai is an Associate at Economic Laws Practice.

The authors may be contacted at: stellajoseph@elp-in.com;yashdesai@elp-in.com