As online sales grow throughout the world, some countries are turning to banks and credit card companies to collect the sales and value-added taxes they often are missing. Above, an Amazon fulfillment center in Italy.
Photographer: Giulio Napolitano/Bloomberg

Tax authorities want their slice of the billions of dollars of untaxed revenue flowing through platforms like Amazon.com Inc. and Netflix Inc. Their plan: To enlist banks, credit card companies and mobile payment providers to help them collect it.

Vietnam is the latest country to require financial institutions, starting July 1, 2020, to remit value-added tax from their clients’ cross-border payments for foreign digital goods and services.

Mexico, Nigeria, Thailand, and others have proposed similar laws that could go into effect next year. The U.K. has been mulling alternative approaches. Argentina and Colombia are among those already looking to financial institutions for the taxes.

Many U.S. states, the European Union, and countries including New Zealand, India, and Malaysia have passed or are considering laws that require online marketplace platforms, not payment providers, to enforce tax obligations—a route recommended by the Organization for Economic Cooperation and Development.

Many tax practitioners doubt that relying on banks and mobile payment providers to collect tax is a viable long-term solution, because of high compliance costs and difficulty of administration.

“No doubt that the Visas and MasterCards of the world are very, very concerned about taking on these new rules that implicate them to serve as an agent,” said Michael Silva, an international tax partner at DLA Piper in Miami who sits on the board of the Florida International Bankers Association. “It’s a fast-moving pendulum for government and tax authorities to go in this direction of deputizing the payors.”

When online marketplaces and digital service platforms allow a buyer in one country to buy from a seller in another, the transaction is subject to a consumption levy, like VAT or a goods-and-services tax, in the country where the buyer is located. But sellers, or individual vendors, don’t always know what their tax obligations are in every country they sell into, or they might just avoid them.

The countries going after financial service providers don’t see being able to get millions of third-party sellers on major platforms to register with them and remit the VAT, or to hold e-commerce giants responsible for doing it.

“It’s very much a silent problem,” said Richard Asquith, vice president of global indirect tax at Avalara in the U.K. “It’s difficult to establish how much of that is going on. No tangible goods to track through customs or authority. That’s what’s pushing authorities to look at this.” 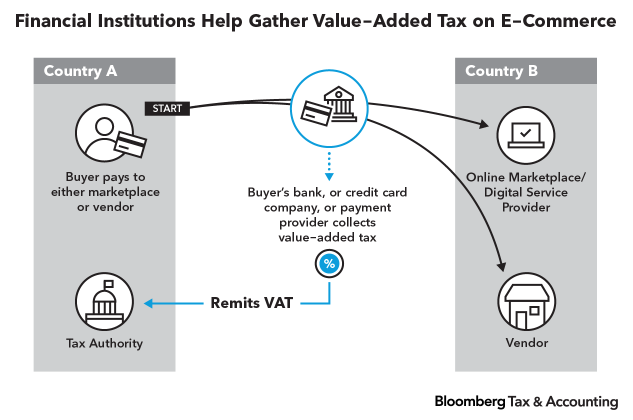 Countries turning to banks and payment service providers for support see help with tax collection as an extension of the monitoring that financial institutions already do in a highly regulated industry, tax practitioners said.

“But when you talk to banks and credit card companies they just roll their eyes at having to add on a bit of information to the payment,” Asquith said. “Adding on a simple code is unbelievably complicated. It’s like, I’ve just built you a house, and you’ve looked at it, and told me ‘I want a basement.’ If you told me that before, I would’ve added it. Now it’s not easy.”

Most participants in the payments cycle can’t categorize transactions or tell where the goods are coming from at the point of sale, said Alex Baulf, director of international indirect tax at Grant Thornton UK LLP.

Financial institutions don’t yet know a number of things about most of the proposals: every type of payment that will be covered, the monetary threshold for payments that must be taxed, or the legal liability they’ll face if they tax the wrong transactions. And in some cases, the institutions are only a fallback option if sellers or digital service providers don’t register themselves for tax collection.

“What you’ll see if you look closer at some of the regimes being discussed is there’s not a lot of detail on how these regimes would work in practice,” said Piet Battiau, head of consumption taxes at the OECD in Paris.

The Organization for Economic Cooperation and Development has been working with member countries to solve the VAT collection issue as part of its efforts to improve the taxation of the digital economy.

In VAT/GST guidance published in March, the OECD advised governments to use the power of online marketplaces to increase efficiency of VAT collection. The most reliable solution still requires each individual seller or service provider to register in the country of consumption and remit VAT to the government, the OECD’s Battiau said. Countries can collect taxes on up to 90% of inbound e-commerce sales by relying on online marketplaces to collect and remit VAT on behalf of potentially millions of individual sellers, he added.

VAT/GST revenue makes up just over one-fifth of tax income in OECD countries, on average, according to the organization’s statistics. Non-OECD countries are generally even more dependent on VAT/GST, which makes up 27.9% of taxation revenue in Latin America and the Caribbean, and 29.3% in Africa. In most countries inbound e-commerce sales are an untapped revenue source, potentially worth billions of dollars.

More than 60 countries follow the OECD guidelines, Battiau said. The organization is still monitoring how countries carry out the rules, especially when differences arise.

“It’s really important in a globalized e-commerce space that the countries implement and coordinate their measures,” Battiau said. “We see that the more coordinated the measures are, the closer they are to standards, the higher the compliance levels are.”

Reliance on financial institutions for VAT collection can be successful in a domestic context, Battiau said. In Argentina, if someone pays for an item with a card at a store, part of that gross payment would go to the shop and part of it would be remitted directly to the tax authorities, he said. 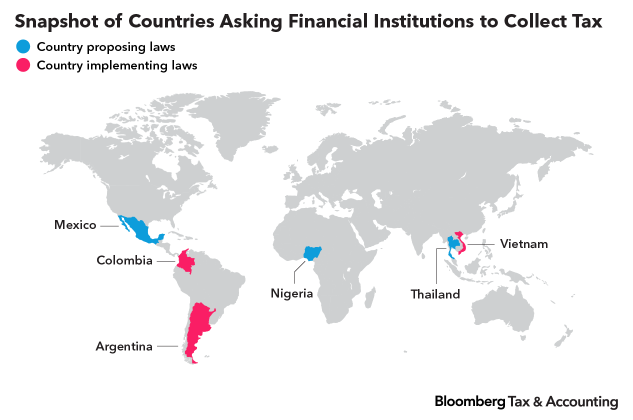 In 2018, Argentina provided financial institutions with a list of all foreign digital service providers they should look out for when flagging transactions for a 21% VAT charge, said Augusto Nicolas Mancinelli, of counsel at DLA Piper in Buenos Aires. The list includes Netflix Inc., Skype Inc., Tinder LLC, and subscription-based media companies including the New York Times and Financial Times.

Colombia passed a law in 2018 requiring payment service providers and banks to withhold VAT on outbound payments, but only if the remote sellers or digital service platforms haven’t registered with the country, DLA Piper’s Silva said. Colombia hasn’t produced a list to help financial institutions.

“We recently issued advice to payors and credit card companies that until that list is promulgated, it’s impossible to determine what sales to withhold VAT,” Silva said.

The U.K., in its 2018 budget, announced the creation of a working group comprising government and industry representatives to explore a split-payment model for VAT. That would allow taxes to be extracted in real time, with part of the payment going to Her Majesty’s Revenue and Customs and the rest going to the seller.

“We are seeking to design a VAT collection mechanism that could reduce fraud and potentially revolutionize how UK VAT is collected,” an HMRC spokesperson said in an email.

Mexico, Nigeria, and Thailand have draft proposals out on VAT collection that could shift some of the responsibilities to financial institutions, though details remain thin, practitioners said. Vietnam’s Finance Ministry, in a May post on its website, said it acted because taxation of “cross-border transactions is still inadequate, especially for income generated from social networking sites Google, Facebook, and YouTube.”

A Netflix spokesperson told Bloomberg Tax the company is “in conversation with the Vietnamese tax department, as they work toward implementation.”

Measures like these could work in the short term, but the costs to financial institutions might outweigh the benefits, the OECD’s Battiau said.

“Some revenue will always be generated through such measures,” he said. “But the question is, is that the optimal solution and the best solution for the country for revenue and also from a commercial point of view?”

—With assistance from Hamza Ali and Lien Hoang.