The European Union, Norway, and Israel plan to remove tax breaks for low-value goods. They'll require offshore sellers and online marketplaces to collect and report the appropriate value-added tax from buyers. Above, a worker loads a truck with packages at an Amazon center in Brieselang, Germany.
Photographer: Sean Gallup/Getty Images

Companies like Amazon and eBay used to be able to ship a $20 scarf or a $15 wallet across most borders without collecting taxes.

But those days are fast ending as sales of low-value goods around the world skyrocket, and more countries start requiring companies based elsewhere to collect taxes on all goods they sell, no matter how low the price. Governments stand to gain billions of dollars in revenue from ending the exemption.

The changes will require offshore sellers and online marketplaces to update their internal systems to ensure they collect and report the appropriate value-added tax from buyers to respective governments, or else face penalties. They might also need to hire external resources to navigate the new requirements. Worldwide e-commerce is expected to reach $1 trillion by 2021, according to the Organization for Economic Cooperation and Development.

“The marketplace is collecting the payment from the end consumer, but at the same time the marketplace doesn’t know what the merchant is shipping. It’s a huge burden. It will increase costs for companies, that’s for sure,” said Alan Rhode, a tax adviser for Ecommerce Europe. The group represents more than 20 e-commerce associations that total over 100,000 companies selling goods and services online to European consumers.

Australia in July 2018 became the first country to start taxing low-value goods. New Zealand followed suit in December 2019. The European Union, Norway, and Israel plan to join these countries in the next few years.

By removing tax breaks for low-value goods, countries also aim to stop foreign sellers from taking advantage of the tax exemption by labeling items as having low-value.

“You can easily order online from outside the EU and receive parcels with bogus invoices reporting very low parcel values,” Rhode said.

The EU aims to abolish its VAT exemption on goods valued under 22 euros ($24.45) by Jan. 1, 2021. It has lost 5 billion euros annually in VAT revenue because goods shipped to European consumers from non-EU countries have been falsely listed below a 22-euro threshold, according to the European Commission. 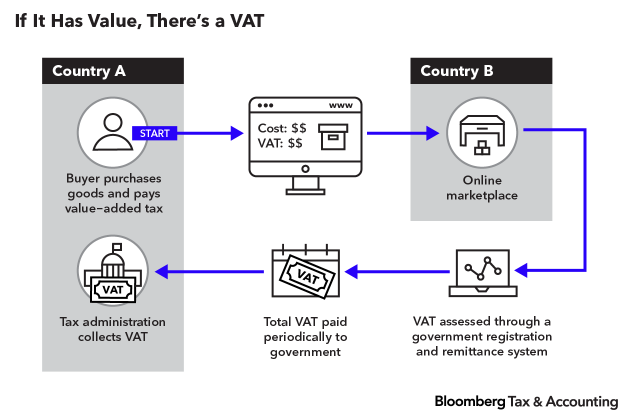 The choice to forgo taxing low-value goods was a reasonable policy option in the early days of e-commerce because administrative costs of checking those transactions weren’t worth it, the OECD said in a 2015 report addressing tax challenges of the digital economy.

But now, governments could collectively reap billions of dollars in revenue by removing tax breaks for low-value goods. More than 60% of such goods purchased by more than 33,000 consumers in 41 countries were valued at less than 50 euros, according to a 2018 study on worldwide e-commerce activity from the International Post Corporation.

“The growth of the platform economy has meant that the jurisdictions are leaving money on the table and that is leading to an unleveled playing field,” said David O’Sullivan, VAT policy adviser at the OECD’s Center for Tax Policy and Administration. “Now a bunch of countries are following suit to raise revenues. It’s changing the regime from taxation at the border to taxation at point of sale.”

The exemption threshold for physical goods varies from country to country: It can be as low as Israel’s threshold of 75 Israeli shekels or as high as Australia’s former threshold of 1,000 Australian dollars.

Australia serves as an example of what steps companies would have to take to comply with new rules to collect tax on low-value goods. For example, if someone in Australia buys a $30 sweater from a U.S. seller from a digital marketplace like Amazon.com Inc., Etsy Inc., or eBay Inc., the marketplace will have to make sure it registers with the government, tracks that transaction, collects the GST, and reports and pays it to Australia. These rules would ensure consumers pay tax on goods bought online from offshore sellers just as they do for goods bought in local brick-and-mortar stores.

Multinationals initially pushed back, arguing “that the increased compliance burden would need to be phased in gradually, especially considering the significant volume of transactions some online marketplaces experience on a daily basis,” said Stuart Reynolds, founder and chief executive officer of accounting and advisory firm Fullstack Advisory in Sydney.

“VAT is an extra cost that needs to be passed on. Contracts need to be changed in terms and conditions to make sure that VAT cost is added onto the final price,” said Richard Woolich, a partner at DLA Piper UK LLP.

The move prompted Amazon to briefly suspend exports from international stores to Australia. It redirected Australian customers to its domestic site, amazon.com.au., to bypass compliance burdens of remitting the GST. But after feedback from customers, the e-commerce giant decided to focus on building the complex infrastructure it needed to comply with the new law and export low-value goods to Australia.

The Australian Treasury plans to carry out a two-year review after July 1, 2020 of its low-value goods rules to see how to improve issues that can’t be addressed through administration, the spokesperson said. The details of the review haven’t been made final.

Australia said it helped the top 100 nonresident businesses that imported goods to Australian customers and hosted webinars, a spokesperson for the Australian Taxation Office said.

“All major platforms are now registered and collecting, despite industry concerns that this would be impossible to achieve,” the ATO spokesperson said. Businesses report the VAT to the agency on a quarterly basis.

An Etsy spokesperson said the company updates its systems to ensure VAT is collected and remitted in specific markets as new requirements develop, and informs its sellers on the changes to ensure compliance. Etsy has communicated to its sellers on changes in international VAT requirements through updates to its Seller Handbook and posts on its help center page, the spokesperson said.

A spokesperson for eBay said the company complies with national and international tax rules, including remitting the VAT to tax administrations when required.

The country has incorporated lessons from Australia’s low-value imported goods rules into its law, Eugen Trombitas, a partner at PwC in New Zealand, said.

New Zealand is including flexible foreign exchange conversion rules for the value of items as well as safe harbors to protect marketplaces from being liable in case incorrect VAT information is sent to the government.

For Amazon, only its U.S. site is available to New Zealand consumers as its U.K. site doesn’t yet comply with the rules, said Peter Scott, a partner at KPMG’s New Zealand office. “There’s obviously still some work going on,” he said.

Businesses still question how effectively New Zealand tax authorities could enforce the new rule, given that it applies to nonresidents. “You’ve got a New Zealand revenue authority that’s dealing with nonresidents so they don’t necessarily have easy access to information or the ability to actually enforce compliance other than relying on voluntary compliance,” Scott said.

Norway will impose a 25% VAT on imported packages below 350 Norwegian krones ($38.98) by January 2020. The country’s tax authority didn’t respond to requests for comment.

Israel was supposed to start requiring VAT on imported goods by April 1, 2020, but the measure has stalled as the country faces a third general election in less than a year. “Policy decisions will be taken when a new government is formed,” a finance ministry spokesperson said.

Israeli retailers have long campaigned for an end to the VAT exemption granted to online shoppers importing goods from abroad with a value of less than 260 Israel shekels. “The State of Israel is encouraging its residents not to do their shopping here in Israel, and to give their purchasing power to foreign suppliers instead,” Uriel Lynn, president of the Federation of Israeli Chambers of Commerce, said.

—With assistance from Sam McKeith, Matthew Kalman, and Joe Kirwin.