criticized what he called the U.K.’s “corrupt system” in a speech kicking off the opposition Labour Party’s campaign to overthrow Prime Minister ’s Conservatives in the Dec. 12 election.

He also attacked billionaires including Chairman and founder , as well as hedge fund manager , and reiterated Labour’s plans to nationalize rail, mail and water companies. He also said a Labour government would make private schools pay their taxes in a “fair and proper way.” 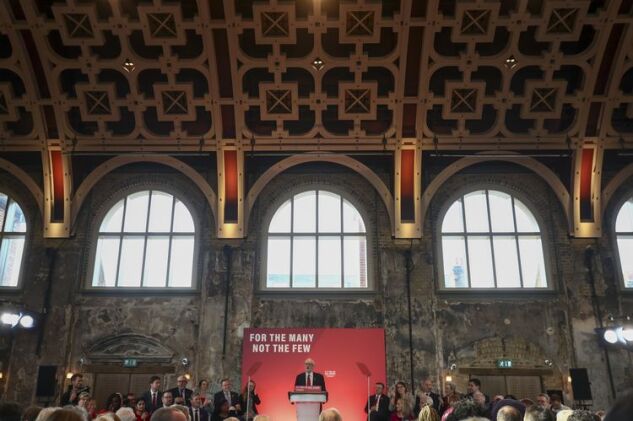 Labour’s core message—a pledge to stand with the “many” and not the “privileged few”—echoes themes it used in the 2017 election, when the party confounded the polls to deprive then Prime Minister of her parliamentary majority. Trailing again, Corbyn hopes the message will propel him to office this time.

“This election is a once-in-a-generation chance to transform our country, take on the vested interests holding people back and ensure that no community is left behind,” Corbyn said. “When Labour wins, the nurse wins, the pensioner wins, the student wins, the office worker wins, the engineer wins.”

Johnson called the election to break the deadlock in Parliament, which has failed over the past three years to pass a deal to take the U.K. out of the European Union and deliver on the result of the 2016 Brexit referendum.

The prime minister has said he’ll push through his deal and deliver Brexit by the new deadline of Jan. 31 if he wins a majority. Corbyn, for his part, repeated Labour’s policy to negotiate a deal with the EU that protects jobs and the economy, and then pitch that deal against Remain in another referendum.

“We’ll go into office and immediately open negotiations with the EU on a sensible relationship with Europe,” he said.