German authorities descended on Deutsche Bank AG, including its downtown Frankfurt headquarters, in a coordinated raid related to a money-laundering investigation.

More than six police vehicles, their blue lights flashing, pulled up to Deutsche Bank’s main offices shortly before 9 a.m., in an operation involving about 170 officers. The main suspects in the probe stemming from 2016 disclosures known as the Panama Papers were two bank employees who were not identified beyond their ages -- 50 and 46. Authorities seized documents and electronic files and said they were also looking at whether others might have been involved.

“As far as we are concerned, we have already provided the authorities with all the relevant information regarding the Panama Papers,” Deutsche Bank spokesman Joerg Eigendorf told reporters in Frankfurt.

For the beleaguered German lender, the raid adds to a panoply of headaches -- commercial, regulatory and legal -- facing Chief Executive Office Christian Sewing and Chairman Paul Achleitner. The stock has lost almost half its value this year, after sliding about 3 percent on Thursday. The cost of insuring its junior debt against losses jumped 11 basis points to 383 basis points, the highest in two years, according to data compiled by CMA.

“This must be associated with criminal behavior and not just a trivial offense,” said Stefan Mueller chief executive officer of DGWA, an investment advisory boutique based in Frankfurt. He believes the bank will now be paralyzed for months until it becomes clear how it will be affected by new potential fines. “Maybe this time, Achleitner will fall. The bank needs fresh blood to make a radical cut at its management.”

The Panama Papers refer to a collection of documents leaked in 2016 from Mossack Fonseca, a Panama-based law firm that created shell companies to facilitate tax avoidance. At the time, Deutsche Bank severed ties with a Cypriot lender partly owned by VTB Group that was identified in the reporting.

The German lender may have helped clients in setting up offshore companies in tax havens. Money obtained illegally may have been transferred to accounts at Deutsche Bank, which failed to report the suspicions that the accounts may have been used to launder money, Frankfurt prosecutors said. The investigation is focused on a Deutsche Bank unit based on the British Virgin Islands, which dealt with more than 900 clients and processed 311 million euros ($354 million) in 2016 alone, according to the prosecutors. 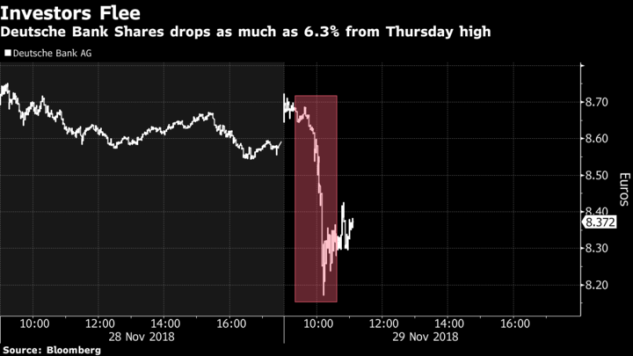 The timing of the raid inflicts more pain on Deutsche Bank after a series of setbacks and repeated failures in keeping misconduct in check have pushed the shares to all-time lows. Investor worries have mounted over its role as a correspondent bank in the multi-billion-dollar money-laundering scandal at Danske, and Germany’s markets regulator has taken the unprecedented step of appointing a monitor to oversee the firm’s efforts to improve money-laundering and terrorism-financing controls.

Deutsche Bank has spent more than $18 billion paying fines and settling legal disputes since the start of 2008, according to company disclosures compiled by Bloomberg News. In Europe, Royal Bank of Scotland Group Plc is the only lender to have faced a bigger tab, at $18.1 billion, the Bloomberg calculations show.

“Just when you thought Deutsche Bank had left it’s legal troubles behind it, there’s more,” said Markus Riesselmann, an analyst at Independent Research who recommends investors sell Deutsche Bank shares. “Investors really want to be able to focus on the bank’s operating business, so this noise around them is quite unhelpful for the mood.” 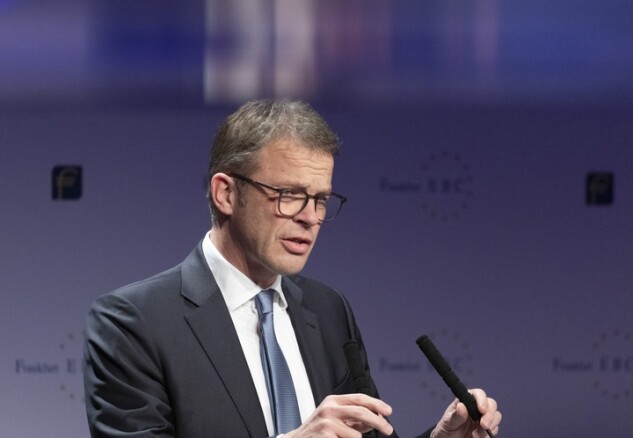 Sewing, who took the top job in April, is replacing key executives as part of a management shakeup as he struggles to get Germany’s biggest lender back on track. Sylvie Matherat, a management board member who serves as the bank’s chief regulatory officer, and Tom Patrick, who runs operations in the Americas, are among executives who might ultimately leave, people familiar with the matter said this week.

In a June 2017 interview, Matherat described the monumental task of modernizing the company’s compliance methods. After years of acquisitions and overseas expansion, the lender was left with a patchwork of computer programs to monitor transactions. The bank didn’t have a complete picture of the compliance controls in the organization’s businesses and regions, she said.

To contact the editors responsible for this story: Dale Crofts at dcrofts@bloomberg.net James Hertling, Chad Thomas