Pharmaceutical giants AstraZeneca and GlaxoSmithKline have cited patent boxes as important factors in determining their tax rates in recent financial reports. Above, a sign is pictured outside of the GlaxoSmithKline research center in Stevenage, U.K., on Nov. 26, 2019.
Photographer: Simon Dawson/Bloomberg

Pharmaceutical giants such as and , and Silicon Valley technology companies, could face substantial tax increases if a rewrite of global tax rules kills off the popular incentives known as patent boxes.

But part of the Organization for Economic Cooperation and Development’s plan to create a global minimum corporate tax, known as Pillar Two, allows countries to tax a company’s income if it’s not being taxed at a minimum threshold in another country. Those provisions could apply to patent box income, unless the nearly 140 countries involved in negotiations agree to exclude it from the rules.

“It’s pretty much going to kill patent boxes, because the whole point of these regimes is to attract IP research and development with low tax rates,” said Eloise Walker, head of corporate tax at Pinsent Masons in the UK.

The OECD has said an aim of Pillar Two is to limit “race to the bottom” tax competition among countries offering lower and lower corporate rates to attract business, and that carve-outs for such regimes would “undermine the policy intent and effectiveness” of a minimum tax. Countries have yet to come to an agreement on the final design of the rules. 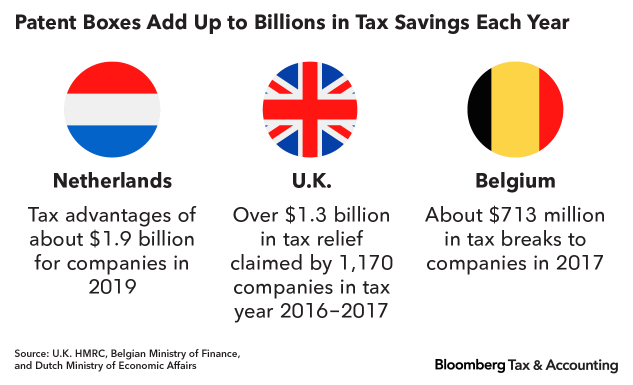 A Dutch innovation box created 1.6 billion euros ($1.9 billion) in tax advantages for companies in 2019, and the U.K.’s regime saw over 1 billion pounds ($1.3 billion) in tax relief claimed by 1,170 companies in tax year 2016-2017, according to data from both governments. AstraZeneca and GlaxoSmithKline have cited patent boxes as important factors in determining their tax rates in recent financial reports. The companies didn’t respond to requests for comment.

Big companies are the biggest users of the patent boxes because economies of scale makes the tax savings worth the administrative costs for companies with more IP held in these boxes, practitioners say. In the U.K., for example, 95% of the tax relief claimed under the patent box regime in 2016-17 came from large companies. The U.K. government defines large businesses as having 20 million pounds or more in profits annually.

Patent boxes wouldn’t be forbidden If there’s no carve-out under the OECD’s Pillar Two, but any income taxed at less than a to-be-decided minimum rate by the patent box country would get taxed by another country to make up the difference. 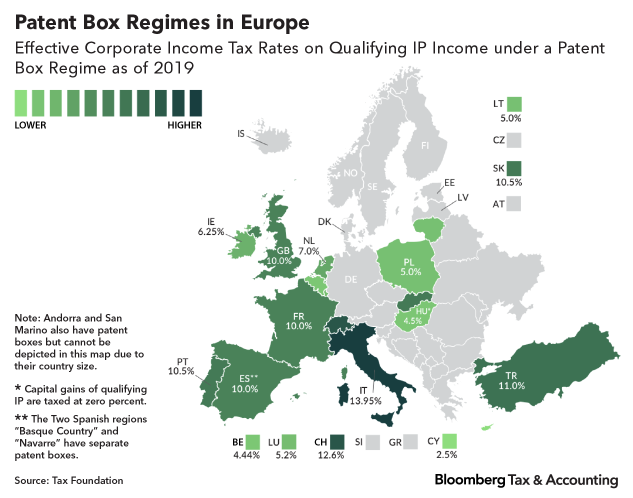 Big pharma and other IP-heavy companies, along with business groups in some countries, have been lobbying the OECD to exclude patent box income from the requirements to meet a global minimum tax rate, and say they’ll continue to do so.

The Irish Pharmaceutical Healthcare Association, in an email, said it planned to lobby Ireland and the EU “on retaining our many competitive advantages,” including Ireland’s ‘knowledge box,’ which cuts Ireland’s 12.5% corporate tax rate in half for qualifying income. Ireland has long been criticized for using very low tax rates to lure multinational companies.

The Irish Finance Ministry didn’t respond to a request for comment.

The Dutch conglomerate Unilever NV called for “a full carveout” for regimes that complied with existing OECD standards, when the global body last solicited public comments on Pillar Two in December 2019. Not excluding patent boxes could hinder research and development of new medicines and encourage governments to look outside the tax system for incentives, undermining tax transparency work done in recent years, the letter said. Unilever declined to comment.

The Digital Economy Group, which represents U.S. tech companies, last December called for Pillar Two to not “reverse or reduce the effect” of patent boxes already deemed OECD-complaint. The German Chamber of Commerce is also lobbying to keep the incentives, even though the German government has been arguing since at least 2013 to ban them as unfair competition. The German Finance Ministry didn’t respond to a request for comment.

Even if Pillar Two doesn’t give a bye to patent boxes, it should include some allowances for tax policies that spur innovation, said Louise Weingrod, vice president of global taxation at .

“The critical point is that tax policy continue to support innovation. That couldn’t be more clear than at a time in a pandemic when many, many pharma companies are looking at treatments and vaccines,” she said.

The OECD’s 2015 project to crack down on corporate base erosion and profit-shifting allowed for preferential tax regimes like patent boxes to continue as long as they were for substantial activity like research rather than a vehicle to just hold IP in a jurisdiction.

Today, some countries are pushing for the minimum tax rate to apply to patent box income, rather than offering a carve-out, annulling the benefits.

“They want companies paying a minimum level of tax in each jurisdiction,” but patent boxes would allow for the continuation of low tax rates, giving companies an incentive to continue using those jurisdictions, said Brian Jenn, a partner at McDermott Will & Emery in Chicago. As a deputy international tax counsel at the U.S. Treasury, he previously served as co-chair of the OECD’s Task Force on the Digital Economy.

The Dutch Finance Ministry said in a statement that it was it might not support a carve-out for patent boxes. “In general, exceptions do not contribute to the policy goal of ensuring that companies are always subject to at least a minimum level of taxation,” a ministry spokeswoman said.

It’s not certain whether Pillar Two will doom patent boxes. It probably will include carve-outs for tax incentives for on-the-ground, tangible activity, like a free trade zone, said Shee Boon Law, director of international tax at DLA Piper in London—but it’s not clear whether IP boxes will also get an exclusion.

The Pillar Two minimum tax would “break new ground” in the OECD’s approach to low tax rates: It would apply if a company is paying too low a rate even if it has substance in a jurisdiction, said Barbara Angus, global tax policy leader at EY in Washington.

“The whole debate really underscores the fact that Pillar Two and minimum taxes are a very different animal than the work that the OECD has done in the past,” she said.

—With assistance from David Hood and Ruben Munsterman.