Big companies are facing pressure from Congress and investors to report how much corporate income tax they pay.

Environmental, social, and governance-oriented investors, and members of Congress, want large public companies to disclose where they shift their profits and how much they pay in taxes, and to cut back on aggressive tax planning. They’re facing resistance and a response seen by some critics as little more than marketing in an attempt to counter a White House-promoted narrative that America’s biggest corporations don’t pay their fair share.

“Some investors, they don’t even like the word ‘tax planning.’ They don’t think it should be part of the vocabulary of a company,” said Harris Horowitz, global head of tax policy and innovation at the investment management giant BlackRock Inc., during a recent KPMG-hosted webinar. “At the other end of the spectrum, there are shareholders who believe that if you don’t take tax risk, that’s not doing well by them.”

The U.S. trails its developed European and Australian counterparts in terms of requiring companies to disclose more and its companies voluntarily doing so, but America is starting to catch up, tax and finance professionals say.

House lawmakers on June 16 narrowly passed a bill (H.R. 1187) that would—among other ESG provisions, such as political spending and climate change-related risk disclosures—require public companies to disclose where they hold subsidiaries, earn profits, and pay taxes. Rules for ESG disclosure mandates are also on the Securities and Exchange Commission’s agenda.

While it faces long odds in the Senate, the bill’s tax disclosure component, the Disclosure of Tax Havens and Offshoring Act (S. 1545, H.R. 3007), has plenty of private-sector backing, with 66 investors representing $2.9 trillion in assets under management signing onto May letters to the leaders of the relevant House and Senate committees urging support.

In March, a group behind the successful push for legislation to require companies to disclose their real owners put together a list of hundreds of analyst, business, investor, union, academic, and nongovernmental endorsements for earlier versions (S. 1609, H.R. 5933) of the act.

The Biden administration’s rhetoric and, in a similar vein, the widespread belief among small businesses and individuals that corporations “don’t pay their fair share” of taxes is only heightening the pressure. So too is a 130-nation endorsed proposal announced last week to set a minimum multinational tax rate of 15%.

“We’ve seen a lot of momentum for this type of transparency on tax payments that multinational corporations are making overseas,” said Erica Hanichak, government affairs director at the FACT Coalition. The group’s name derives from its objectives: financial accountability and corporate transparency.

Investors, Hanichak added, “see this as something that’s critically important and material to the investment decisions that they’re making—not only to gage risk to the reputation of businesses seen as dodging taxes, but also regulatory risks and systemic risks of undermining tax payments.”

Companies’ commitments to tax transparency or responsibility have grown since 2018, as have evidence of corporate boards’ oversight of tax risks and country-by-country breakdowns of where corporations pay taxes, according to a June report commissioned by Principles for Responsible Investment, or PRI, a United Nations-backed network of ESG-focused investors. 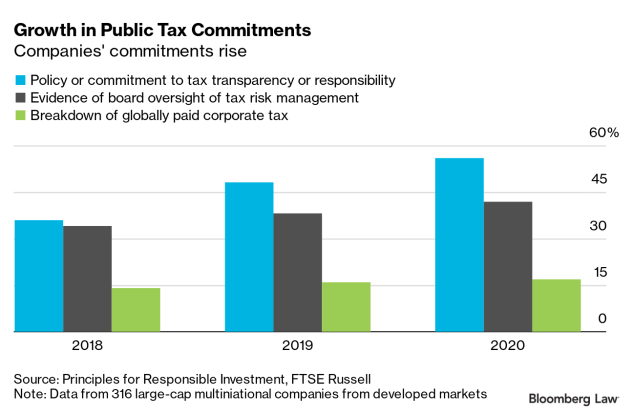 “Although there is a way to go, it is becoming more mainstream,” said Ewan Livingston Docwra, a strategist focused on tax at the B Team, a nonprofit that has developed its own set of voluntary tax principles after meeting with a group of companies. “We’ve seen more and more investors taking a public position on tax and calling for greater levels of transparency in particular from companies.”

This transparency push has roots in earlier efforts to get extractive companies—in the oil and gas and mining sectors—to make public what they paid, including taxes, to natural resource-rich foreign governments in countries where they operate, starting about two decades ago. A part of the 2010 Dodd-Frank Act known as the Cardin-Lugar Amendment was meant to increase the transparency of mining and oil and gas companies that make payments to foreign governments. An SEC rule implementing it in 2016 was undone by a Congressional Review Act measure the next year.

Tax disclosure has also been more popular among European and Australian companies than U.S. ones. Investors and those who study this issue cite British companies Vodafone and Unilever, Anglo-Australian resources company BHP Billiton, and Anglo-Australian multinational Rio Tinto as stellar examples of companies that publish their country-by-country tax payments.

In August 2019, four Danish pension funds published a “Tax Code of Conduct,” which outlines how managers “should behave in the area of tax with the aim of ensuring more efficient and sustainable investments from a tax perspective.”

“I think this is reflective of the broader trends that we’re seeing on engagement and ESG,” said Vaishnavi Ravishankar, a senior analyst at PRI. “It’s possible that US companies will catch up, and there could be more disclosure going forward, but there is some way to go.” 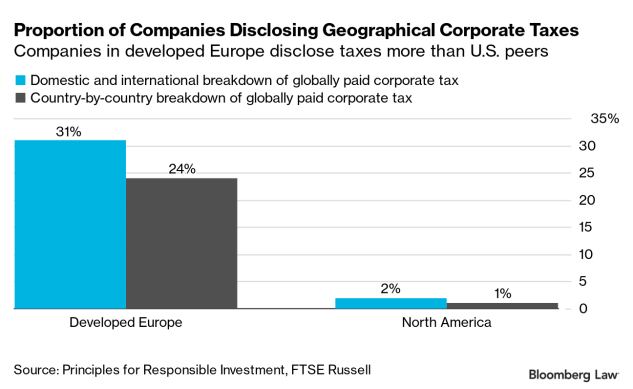 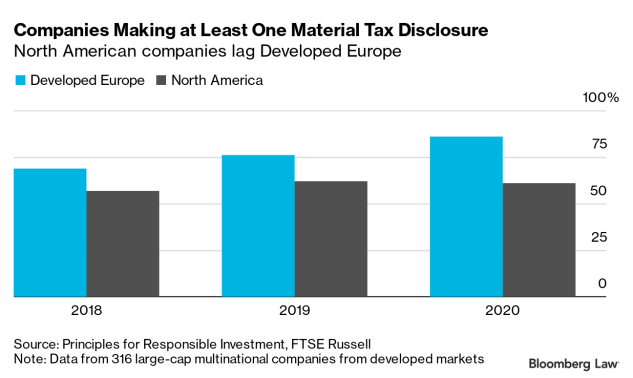 Ravishankar and other investment and advocacy professionals cite cultural differences between the U.S. and Europe, as well as differences in political and regulatory environments, to explain the gap.

In the U.S., shareholder resolutions dealing with tax disclosures and strategies have been few and far between, and haven’t gotten many votes. Two stick out: one from a shareholder of , for a report on responsible tax principles, and another leveled at Google parent requesting adoption of a policy and report on the impacts of its tax strategy, according to data from proxy data firm Insightia. The former, in 2018, got a 1.4% vote, and the Alphabet proposal, in 2014, received a 1% vote.

But investors are getting wary of risky tax planning maneuvers best described as falling into a grey area of legality, or just not illegal, such as Google’s famed “double-Irish, Dutch sandwich,” in which it shifted profits through offshore subsidiaries to no- or low-tax jurisdictions.

Aggressive strategies “did suggest something about the mentality of the management team, because not all companies went down the path of implementing that kind of structure,” Rob Wilson, a research analyst at MFS Investment Management, told Bloomberg Law. “What we’re trying to do as an investment team here is really be thoughtful about which of these strategies that companies might be using to reduce their taxes seem to us fair and reasonable” and which ones seem like they could end up on the front page of a newspaper.

Still, disclosures alone may not be enough to dissuade aggressive planning, said Andrew Belnap, an assistant professor at the University of Texas McCombs School of Business.

“I do think this kind of disclosure can be meaningful and beneficial to investors and the public,” Belnap said. But, he added, much of what these companies are doing is legal, so the activist investors may be better off asking politicians to change the tax code.

Companies and their advisers know this pressure isn’t dying away.

While the GRI and B Team standards are positive developments, there hasn’t been much progress among U.S. companies, as it’s an “extremely difficult issue to get traction on,” said Adam Kanzer, head of stewardship for the Americas at BNP Paribas. Company executives are worried about their tax information getting taken out of context or misunderstood, so they try to control the narrative with the help of accounting and auditing firms that have a history of helping them with tax avoidance, he said.

“This is really getting to the core of what matters to companies financially,” said Kanzer. “When you get to the core of how the company structures itself internationally and how it pays its taxes, that is some pretty sticky stuff. That’s stuff they don’t really want to talk about and certainly don’t want to change.”

PwC, which in May became a supporter of a fund aiding GRI’s crafting of reporting standards, developed in the early aughts the notion of “total tax contribution.”

It’s a full picture of companies’ tax payments and collections—not just corporate income taxes, but payroll, property, excise, value added, and other taxes, including those collected on behalf of governments. The accounting firm described it as a way to “help companies respond to the current environment” and “one of the tools that can help companies tell their own story, which may not be fully explained by mandatory rules.”

More recently, PwC said in mid-June that it will hire 100,000 people and invest $12 billion in the next five years with a major focus on expansion of its ESG services and “building trust.”

“Can you identify where your tax risks are across the globe? Because if a story blows up, you’re going to need to be able to handle that. Because it’s going to be front-page news,” said Will Morris, the firm’s deputy global tax policy leader, during a May webcast the firm hosted on the intersection of ESG and tax. “Do you really understand your own tax numbers? If you don’t, you’re in trouble. You need to collect those. You need to begin to understand them and then, given this transparency environment that we’re in, you need to construct a narrative around them.”

Some tax and activist investment professionals worry that this will obscure and distract from the kind of detailed breakdown of tax planning and country-by-country profits, operations, and payments they’re looking for when assessing the risk of investing in a company.

“We absolutely agree that a company should be proactive in providing a narrative, explaining how their tax policies and practices line up with their sustainability commitments and other commitments to the public,” said Niko Lusiani, a senior adviser on corporate advocacy at the nonprofit Oxfam America, adding that he would recommend companies avoid the total tax contribution metric.

The narrative “should also be verified by the numerical quantitative data that would be available through a public country-by-country reporting standard, and those two things need to stand together,” Lusiani said.

Elise Bean, who led investigations into tax dodging by multinationals aided by Big Four accounting firms like PwC for former Sen. Carl Levin (D-Mich.), noted that the change in rhetoric is “a sign that they’re starting to feel cornered.”

Some corporate boards and the shareholders they have to please have gradually begun to shift away from economist Milton Friedman’s doctrine—that corporations are first and foremost obligated to generate profits—in favor of delivering benefits to a broader population of “stakeholders,” such as employees and consumers. That “stakeholder” vision is relevant to tax, she said.

Previously, the standard rhetoric has been, “we owe it to our shareholders to pay little or no taxes,” Bean said. But now, “it’s not just our shareholders that we have an obligation to. It’s also our larger community, our workers, our customers, our stakeholders. And once you take that step, the very next step is having to pay some taxes, and so the rhetoric is changing.”