The infrastructure proposal would make several substantive changes to the federal tax code, including a 7 percentage point bump in the corporate rate, but states would benefit primarily from features boosting federal taxable income, the critical starting point to determine state tax liabilities. Several features of Biden’s tax plan would broaden that base by eliminating incentives for large multinational corporations to shift their profits to low-tax jurisdictions.

State policy analysts and tax practitioners are closely watching how the White House and Congress could overhaul two features of the 2017 tax reform law. The Biden Administration has recommended a significant expansion of the global minimum tax for multinationals, known as global intangible low-taxed income, or GILTI. The administration also called for eliminating the preferential rate under the Foreign Derived Intangible Income tax regime, or FDII.

Whether states bank a trickle or a river of new dollars from the Biden plan will depend on the degree to which they embrace these features. If the proposal moves ahead, look for business interests to exert pressure on states to decouple from any federal efforts to tax income earned offshore.

“The question is, would states decide to go against their history and start incorporating it, which would allow for a significant revenue boost for those states if they decide GILTI is now part of their tax base,” said Jamie Yesnowitz, a state and local tax practice and national tax office leader at Grant Thornton LLP.

Currently 14 states tax some portion of GILTI and another five states potentially tax it, but haven’t issued guidance, according to an analysis by the Tax Foundation. Several—including Connecticut, Massachusetts, New York, and Tennessee—tax GILTI, but at a nominal rate.

Progressive policy groups plan to encourage states to take advantage of a historic opportunity presented by the White House to mitigate tax base erosion due to corporate profit shifting.

“I hope the attention and the visibility the administration is giving to international income shifting will spur equal attention at the state level,” said Michael Mazerov, a senior fellow at the Center on Budget and Policy Priorities. “I’ve been trying for a number of years to educate legislators about the fact that this is a really big problem.” 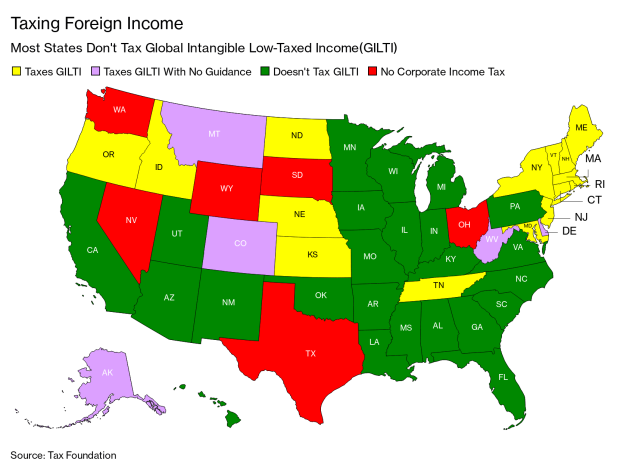 Biden’s Made in America Tax Plan includes strategies raising more than $2 trillion for the federal government over 15 years. Key features include: bumping the corporate rate from 21% to 28%; creating a new alternative minimum tax on corporation’s “book income” reported to shareholders; and, barring U.S. corporations from “inverting,” or claiming tax havens as their residence.

Most analysts see little immediate flow-through impact for the states. Some features, including the proposed 28% corporate rate, could interfere with the states’ capacities to tax multinational businesses.

The plan “puts pressure on states that might have an interest in raising their corporate income taxes because you’re bumping up on a very high combined rate,” said David Brunori, senior director at the Washington national tax office of RSM LLP.

The GILTI and FDII provisions, however, offer huge base-expansion benefits to the states depending on the way they are implemented, said Jessica Morgan, senior manager for state income tax and transactions at Ernst & Young LLP.

GILTI was developed as a new category of foreign income under tax code Section 951A to discourage multinationals from shifting income from intangible assets such as patents and trademarks to controlled foreign corporations based in low-tax countries. Under GILTI, multinational companies can get hit with a federal 10.5% levy when their controlled foreign corporations pay less than 13.125% in taxes offshore.

The Biden plan makes offshore investments even less attractive, by boosting the effective tax rate on GILTI from 10.5% to 21%. In addition, GILTI would be required to be determined on a country-by-country basis. Current law permits businesses to blend their income across jurisdictions, reducing or eliminating the tax. Finally, the Biden plan removes the exclusion equal to 10% of the “qualified business asset investment.”

The Biden plan also repeals FDII, which was originally offered as a counterbalance to GILTI. The regime currently offers a preferential 13.5% effective tax rate for certain foreign sales.

State legislatures are grappling with whether to tax foreign-derived income or decouple from the new features of the federal code. Those discussions could get particularly complicated in states that haven’t fully addressed federal tax reform from four years ago through legislation or guidance, Morgan said.

Any new effort to tax the international income of multinationals would violate a fundamental principle of taxation holding that the states’ authorities are primarily domestic, ending at the “water’s edge,” said Jared Walczak, vice president of state projects at policy think tank Tax Foundation.

“By shifting to country-by-country calculations of GILTI and eliminating FDII, Biden’s plan would make international taxation even more aggressive in states which conform,” Walczak said. “Rather than doubling down on a tax provision that makes little sense at the state level, and which fits uncomfortably in existing state tax codes, policymakers should consider decoupling from GILTI in those states that currently tax it.”

Brunori cautioned that any state taking aggressive steps to capture revenue from the expansion of GILTI could face a lawsuit challenging its authority to tax income earned overseas. Late last year the Council on State Taxation sued Nebraska after the state issued guidance for taxing foreign business income.

“There are some lingering constitutional issues on whether the states can even tax” foreign income, Brunori said. “Personally, I think the states would lose.”