The Senate is set to vote March 18 on a coronavirus relief package.
Photographer: Mark Wilson/Getty Images

Senate Majority Leader scheduled a vote Wednesday afternoon on the House bill responding to the economic fallout from the coronavirus pandemic and plans to immediately turn to a bigger stimulus package as the outbreak has the U.S. teetering on a recession.

Senate passage of the legislation -- which provides free virus testing, bolsters unemployment and food assistance, and gives states billions of dollars in aid -- would send the bill to President to sign into law.

The vote is planned for about 3 p.m. Washington time. Each vote is expected to take 30 minutes to give senators time to go to the chamber’s floor without clustering in groups.

McConnell called the House-passed package of measures “well-intentioned” despite what he described as shortcomings, and he said the Senate will immediately turn its attention to the next stage of economic stimulus.

“I will not adjourn the Senate until we have passed a far bolder package that includes significant relief for small businesses,” McConnell said on the floor of the chamber. 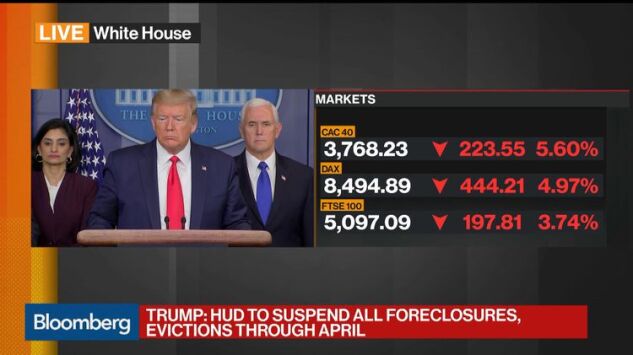 President Donald Trump says the size of the checks that will be going out to Americans are “to be determined.”
(Source: Bloomberg)

All sides are discussing proposals of at least $1 trillion in aid. The administration has suggested sending Americans two rounds of checks, totaling $500 billion, arriving on April 6 and May 18, in equal value, according to an outline of the White House’s coronavirus stimulus plan obtained by Bloomberg News.

Trump told reporters Wednesday that payments to Americans are “to be determined.”

The president also said he didn’t agree with Treasury Secretary Steven Mnuchin’s warning to GOP senators that U.S. unemployment could rise to 20% without government intervention, saying that is a worst case scenario.

He said the Department of Housing and Urban Development will suspend foreclosures and evictions through the end of April. He also is invoking the Defense Production Act to give the government more latitude to direct industrial production during an emergency.

As part of the U.S. response, the White House is requesting $45.8 billion in emergency spending for the current fiscal year, and also seeks to raise the Centers for Disease Control and Prevention budget by $1.3 billion to $8.3 billion for the fiscal year starting in October.

The details of the stimulus plan will require negotiations with Democrats, who control the House and whose votes are needed to pass any legislation through the Senate.

A House Democratic official said Wednesday that Speaker and her key chairmen viewed the initial outline from the White House to be insufficient.

The House official said committee leaders are talking to agencies to understand the full scope of their needs, and they are also hearing from members about how federal resources are needed specifically in their cities and states. The early aim is a plan to support a full federal response and bolster states and local entities as they work through the virus response, the official said.

“We’re working as rapidly as we can to pull it together and then of course I’ll need to talk to Leader Schumer about the way forward after that,” McConnell said, referring to Senate Democratic leader . “But first we need to pass the House bill, which we’ll do later today.”

The centerpiece of the House bill gives workers at companies with fewer than 500 employees up to 12 weeks of paid family and sick leave to deal with issues involving the coronavirus, including staying home to care for children home from school. The tax credits for paid family, sick and medical leave in the virus bill would cost nearly $104.9 billion, according to the Joint Committee on Taxation.

McConnell on Tuesday told Senate Republicans who took issue with some provisions in the House bill to “to gag and vote for it anyway.” He said the “imperfections” of the legislation passed by the House Saturday “will just make our more comprehensive package even more urgent.”

To contact the editors responsible for this story:
at kwhitelaw@bloomberg.net