BLOOMBERG TAX INTERNATIONAL FORUM
The Italian CFC legislation has been amended, with effect from 2019, in order to implement the Anti-tax Avoidance Directive (ATAD). Giovanni Rolle looks at the main innovations and the departures from the EU implemented provisions. He also discusses whether, on the basis of the resulting rules, a solution can be envisaged for the unsolved issue of double taxation of CFC income in the case of indirect shareholdings.

Italian CFC Legislation and the 2019 Reform

Controlled foreign company (CFC) rules were first introduced into the Italian tax legislation with effect from 2002. The measure was inspired by the 1998 Organization for Economic Co-operation and Development (OECD) Report on “Harmful Tax Competition: An Emerging Global Issue” and has been amended several times over the years, particularly in 2006, when it was made applicable also to associated (but not controlled) companies, and in 2010 when its scope of application was extended to countries other than those included in the “black list” of privileged tax regimes. Since 2015, the definition of privileged tax regime has also been amended.

The most recent revision was made by Decree No. 142 of November 29, 2018, implementing EU Directive 2016/1164 with effect from fiscal year 2019. The Anti-tax Avoidance Directive (ATAD) was aimed at “implementing the OECD BEPS conclusions at the EU level,” as expressly mentioned at Recital No. 2 of the ATAD.

More precisely, the amendments made by Decree No. 142/2018 to Article 167 of the Italian Income Tax Code (ITC) implement Articles 7 and 8 of the ATAD and, to some extent, the conclusions of the OECD BEPS 2015 Final Report on Action 3 (“Designing Effective Controlled Company Rules”).

Expansion of the Subjective Scope of Application

The first amendment concerns the subjective scope of application. Under the previous text of Article 167, ITC, the CFC rules applied to Italian residents only (including individuals and partnerships), while the new legislation also concerns Italian permanent establishments of non-resident entities. The resulting subjective scope of application is thus wider than that of the ATAD (which targets only entities subject to corporate income tax (CIT)), a departure which may be acceptable under the “minimum protection” criterion set out in Article 3 of the ATAD.

There are no changes to the list of foreign controlled entities ("enterprises, companies and entities") that are subject to the CFC rule. Foreign permanent establishments of such controlled foreign entities are included, as well as those of Italian companies, if the branch exemption regime has been elected by the Italian head office.

As regards the requirement of control, Decree No. 142/2018 has held firm to the pre-existing notion, based on the reference to Article 2359 of the Italian Civil Code, but has added, in light of the provisions of the ATAD, a further condition which is met where an Italian resident has a (direct or indirect) participation into profits of more than 50% in the foreign entity, taking into account the shares owned by controlled subsidiaries under Article 2359 of the Civil Code.

The ATAD provides for an even broader notion of control, which takes into account not only voting rights and profit participation but also the ownership of capital and which includes indirect holdings where held through affiliated companies, as defined at Article 2 of the ATAD (i.e. on the basis of the holding of 25% or more of voting rights, capital, or profit share).

On the other hand, the Italian rules also take into account contractual and de facto control as well as, for individuals, the shares owned by close relatives. These hypotheses are not provided by the ATAD but would be consistent with the mentioned criterion of “minimum protection,” especially in light of the 2015 Final Report on Action 3, according to which (paragraph 25) “Countries may also include de facto tests to ensure that legal and economic control tests are not circumvented.”

The implementation of the ATAD has entailed the amendment of the list of “mobile” activities (i.e. those generating “passive” income, as summarized in the table). 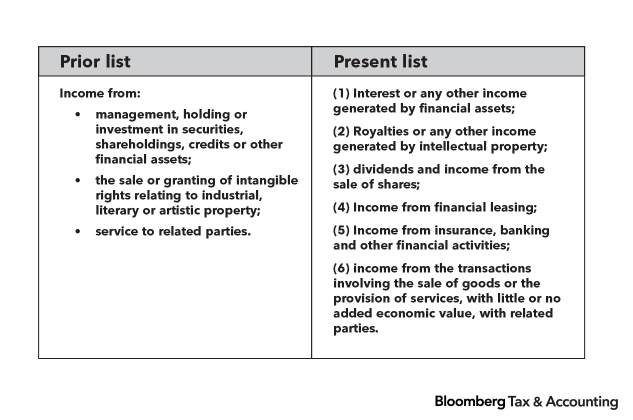 The reference to “little or no added economic value” is not fully clear, since the language used seems to refer to the nominal profitability of the concerned transactions. By contrast, Article 7, Paragraph 2, of the ATAD mentions “income from invoicing companies that earn sales and services income from goods and services purchased from and sold to associated enterprises, and add no or little economic value.”

On such basis, it can be argued that it is not the nominal measure of added value that determines the inclusion of the underlying intragroup transactions within the framework of the CFC rule, but the economic contribution of the foreign entity and, consequently, the (implicit) disproportion between such economic contribution and the nominal profit attributed. The proposed interpretation is also backed by Recital No. 12 of the ATAD which refers to “artificially diverted income to the subsidiary.”

The Italian legislature has made use of the option, provided by Article 7, paragraph 3 of the ATAD, not to apply the CFC rule to an entity or permanent establishment if one-third or less of its income falls within the mentioned categories. In the prior legislation, such threshold was 50%.

Article 7, paragraph 1, letter b) of the ATAD provides for comparisons between “the actual corporate tax paid on its profits by the entity or permanent establishment” and “the corporate tax that would have been charged (…) under the corporate tax system in the member state of the taxpayer.”

The condition was already in force in the prior CFC rule, albeit with reference to some cases only and was supplemented by a decree and some official instructions providing further guidance on how to make the computations and the comparison. The amended version of Article 167, paragraph 4.a, of the ITC, makes reference to a decree by the revenue agency which should provide similar guidance; it may be argued that the old instructions apply in the delay of the issuance of such decree.

Determination of Taxable Income and Taxes

According to the unchanged Article 167, paragraph 6, ITC, the entire income of the foreign controlled entity is attributed to the Italian resident controlling person “in proportion to the share of participation in profits.” The approach of the Italian legislature depicts a substantial departure from the corresponding rule of Article 7 of the ATAD. The latter, in fact, provides two options, i.e. the taxation of mobile income (Article 7, paragraph 2, letter a) or, alternatively, the taxation of income attributable to “non-genuine arrangements” (letter b).

Italy has apparently chosen the first option, but the CFC rule applies, as mentioned, to the entire income of the foreign entity, rather than to that derived from one of the listed categories. According to the explanatory notes, the choice of the legislature is aimed at simplifying the way in which the CFC rule is applied; the effects of the departure from the criteria set forth by the ATAD, however, may lead—depending upon the circumstances—to a different tax liability.

As regards the determination of the taxable CFC income, the ordinary CIT rules apply, with the exception of those related to the deferral of capital gains.

Under Section 5 of the amended Article 167, ITC the CFC rule does not apply where the foreign controlled entity engages in a “substantial economic activity, supported by staff, equipment, assets and premises.” The exemption clause is almost identical to that of Article 7, paragraph 2, a) of the ATAD and closely follows the criteria set forth by the Court of Justice of the European Union (CJEU) in its decision in the Cadbury Schweppes case.

The distribution of profits which have already been taxed under the CFC rule is exempt. Any tax paid by the controlled foreign entity in its country of residence can be credited against the Italian tax liability. Both rules have not been changed since they were already substantially compliant with those of Article 8 of the ATAD.

Recital No. 5 of the ATAD remarks that the rules against the erosion of the tax base “should not only aim to counter tax avoidance practices but also avoid creating other obstacles to the market, such as double taxation.” Recital No. 3 illustrates that it is necessary “to coordinate the responses of Member States in implementing the outputs of the 15 OECD Action Items against BEPS.”

Notwithstanding the importance attributed, in the mentioned recitals, to the coordination of national rules and to the avoidance of double taxation, the CFC rule of Articles 7 and 8 of the ATAD falls short of providing any relief against the multiple taxation of CFC income that might occur where a given entity is controlled by a chain of companies resident in different member states. In such case, the income of the foreign entity may indeed be taxable, where the respective conditions are met, in all the member states concerned, since each of the intermediate holding companies may well be a controlling entity according to the ATAD definition.

The described issue may also arise where the holding companies are resident in the same member state. The Italian legislation has addressed it since the times of the first adoption of the CFC rule. Article 3 of Ministerial Decree No. 429 of November 21, 2001, provides that where an Italian resident person has an indirect control shareholding into a CFC through another Italian resident person, the income of the CFC is taxable (only) in the hands of this latter. In other words, the taxation of the foreign entity income occurs only once, in the hands of the intermediate holding company which is at the lower layer of the chain. The described measure applies only where the intermediate holding company is resident in Italy.

In light of the case law of the CJEU concerning the taxation of foreign shareholdings by the state of residence of the shareholder (e.g., Manninen, September 7, 2004, Case C-319/02) it could be argued that the described Italian remedial measure depicts a difference in treatment between domestic and cross-border shareholdings suitable to constitute a restriction to the freedom of establishment provided by the Treaty on the Functioning of the European Union.

In such a scenario, it can be submitted that Italy (as well as other member states which may have in place a similarly restrictive remedial measure) should refrain from taxing the income of a foreign controlled entity where such income had already been taxed in another member state in the hands of any intermediate holding companies resident there.

The assessment, for financial year 2019, of the conditions provided by the new legislation requires advance planning of the collection and analysis of the financial (and factual) information about the subsidiaries. It is in practice advisable to give priority to those conditions which are easier to be assessed (in particular, the “control” test and the “activity” test) so as to perform the more complex “effective tax rate” in respect of a smaller number of subsidiaries.

For those controlled companies which meet all the conditions, the “substantial activity” exemption should then be evaluated, as well as the opportunity to request a ruling from the Italian tax authority. Finally, it is worth examining whether the CFC income may be taxable in other member states and whether there may be a case for claiming, in such case, a breach of internal market freedoms.