Several countries including France, the U.K., and Italy are taxing digital services. Above, a women rides her bike as she looks at her smartphone in Milan on Jan. 13.
Photographer: Miguel Medina/AFP via Getty Images

The OECD is trying to get nearly 140 countries to agree to an overhaul of global tax by mid-2021.

If that effort fails, a growing number of countries are preparing to launch unilateral measures aimed at tech giants like Facebook Inc. and Amazon.com Inc.

The Organization for Economic Cooperation and Development is leading an effort to address concerns that some multinationals—especially U.S. tech giants—aren’t paying enough taxes in countries where they have users or consumers. The OECD’s two-pillar plan would reallocate profits and set a minimum global tax rate.

Efforts to push unilateral measures may have been aided by the U.S. decision this month to hold off on imposing tariffs in retaliation for the unilateral digital services taxes being levied by several countries including France, the U.K., and Italy.

The situation remains precarious, as 30 of the 37 OECD member countries either already have digital taxes or plan to impose them in the event the talks fail to reach a consensus.

Outside of the OECD, India, Brazil, Indonesia, Kenya, and Nigeria also have digital tax proposals. Meanwhile, several U.S. states have proposals for taxing the digital economy. 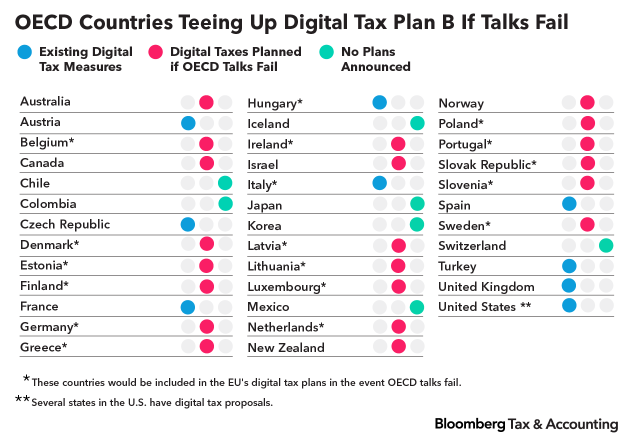 To contact the editors responsible for this story: at mshreve@bloombergtax.com; at djolly@bloombergindustry.com