A planned two-month extension of a popular pandemic relief loan program would lessen concerns that several late-in-the-game changes, combined with bureaucratic hiccups, would freeze many small businesses out.

The Paycheck Protection Program, established last March and revived in January with a fresh round of funding, offers government-backed small business loans that can be forgiven if used to cover employee salaries and other approved expenses. Nearly $120 billion in funding remained as of March 7, but under current law, March 31 is the final day for the Small Business Administration to approve funding for PPP loans.

As that deadline nears, banks have already begun winding down their PPP operations despite recent changes designed to make more businesses eligible for the programs and allow sole proprietors to qualify for larger loans. The situation is further complicated by a logjam in loan forgiveness, which means some applicants currently waiting for a second round of funding may not receive it before the program closes.

Erik Asgeirsson, president and CEO of CPA.com, a subsidiary of the American Institute of CPAs, said tax professionals have been scrambling to help their clients get a loan before the system times out. The AICPA recently sent a letter to congressional leaders and administration officials asking for a 60-day extension of the program, at minimum.

“This is going to really start creating a lot of anxiety, if they do not extend this date because there’s people that are stuck,” Asgeirsson said.

It appears lawmakers are listening to those concerns. The House next week is expected to vote on extending the PPP until May 31, a senior Democratic aide told Bloomberg.

An SBA spokesperson said the agency is “administering the law as written” and declined to say if there was anything it could do to extend the program on its own.

Matt Ellis, owner of Primal Athlete Training Center in Cranston, R.I., is among the small business owners concerned about how the second round of PPP loans have been handled.

Ellis tried three lenders, including the bank that processed his first PPP loan, before he was able to submit his second loan application through PayPal on Tuesday.

The pushback from Ellis’s initial lender came from the fact that he hadn’t applied for forgiveness on his first PPP loan yet. While applying for the loan was straightforward and he had drawn down the money on expenses like payroll and rent as required by the program, Ellis had yet to apply for forgiveness because he didn’t know how to.

“There’s really no instructions on how to do that,” Ellis said. “I think the biggest thing is it seems like there’s not an actual concise process. That would be the thing I say the most, is it seems to be different no matter where you go. I feel like there needs to be a distinct set of rules in place from the SBA to say, ‘Ok, this is exactly what we need.’”

Holly Wade, executive director of research for the National Federation of Independent Business, said many business owners are waiting for forgiveness approval from the SBA via their lender, complicating decisions on whether or not to apply for a second loan.

“They are not interested in incurring more debt,” she said.

Rep. Andy Kim (D-N.J.), speaking during a House Small Business Committee hearing on Wednesday, cited data indicating that the SBA had only processed 36% of loan forgiveness applications, and that constituent businesses in his district were waiting longer than the 90-day timeframe mandated by Congress.

Because of those bureaucratic hiccups, a growing number of groups have asked Congress to either allow applications filed this month to continue to be considered by SBA past the March 31 deadline, or to extend the PPP second round application deadline by 60-to-90 days.

Alice Frazier, president and CEO of Bank of Charles Town in West Virginia, told the committee that communication between the SBA and lenders over why applications are being held up remains a major issue.

“There is a lack of communication to the bank and to the borrower,” said Frazier, who testified on behalf of the Independent Community Bankers of America.

The looming deadline is also a problem for businesses affected by recent changes to the program, including a March 3 regulatory change to the way the self-employed, sole proprietors, and independent contractors calculate how large of a loan they are eligible to receive. And the $1.9 trillion stimulus bill, signed into law Thursday, expands loan eligibility to small news organizations and more nonprofits. 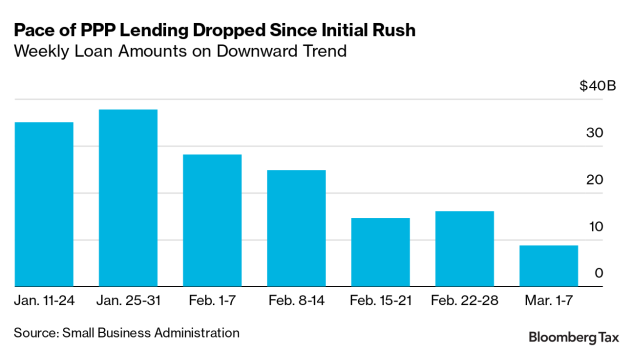 The Biden administration has shown an interest in making PPP more accessible. In addition to the recent changes for sole proprietors, the SBA also carved out a two-week exclusive window for the smallest businesses to submit loan applications.

That two-week “experiment” is over and those very small businesses would benefit from more time to access the PPP funds, said Jennifer Vasiloff, chief external affairs officer at Opportunity Finance Network, a trade group that represents Community Development Financial Institutions. Those lenders traditionally serve as the lender of last resort for businesses or individuals that are denied credit services by regular banks and typically offer services to lower-income businesses.

“This two week experiment was a good sign that the new leaders at SBA kind of recognize that they need to reform some of their programs or processes, so that these most disadvantaged and vulnerable businesses get to the front of the line a little more,” she said.

But Vasiloff said it takes time for the agency to act on loan requests by lenders like CDFIs. So even an application submitted during the two-week window may not come for a while.

“It’s not like you can submit an application as a lender up until the last day of March; you have to submit it in time for the loan to be acted on by SBA, so it’s even less time,” she said.

To contact the reporters on this story: at dhood@bloomberglaw.com; in Washington at cwilhelm@bloombergtax.com