announced a slew of austerity measures to cope with the impact of the coronavirus pandemic and an oil-price rout, tripling its value-added tax and cutting a cost-of-living allowance for government workers.

The steps taken to shore up revenue and rationalize spending are valued at about 100 billion riyals ($26.6 billion) in total, according to the official Saudi Press Agency. Overall spending for 2020 will remain close to what was planned as money saved gets re-allocated to health care and aid for businesses, Finance Minister said in a telephone interview on Monday. shares fell the most in the Gulf while sovereign bonds rose following the announcement, with the security due 2060 leading the advance.

“These are the priorities: the health care of people and the livelihood of people,” Al-Jadaan said. “We want to make sure that we maintain our fiscal strength so that as the economy gets out of the lock-down, we are able to support the economy.” 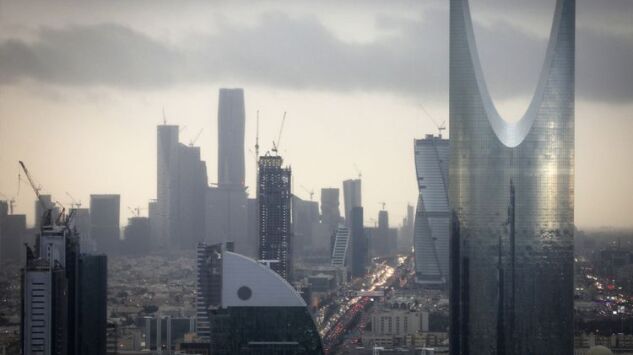 WATCH: Saudi Arabia announced a slew of austerity measures to cope with the impact of the coronavirus pandemic.
(Source: Bloomberg)

Already under a strict curfew to contain the spread of coronavirus, the world’s largest oil exporter is a second crisis caused by the meltdown in global oil markets. The turmoil has slashed state revenue -- most of which comes from crude -- and is set to derail the kingdom’s fragile economic recovery since the last oil price rout in 2014. The price of Brent crude crashed by more than 50% in March, contributing to a record $27 billion monthly drop in the Saudi central bank’s net foreign assets.

Also on Monday, the kingdom announced a surprise move to its oil output to the lowest level in 18 years as it tries to spur a recovery from the energy market crisis that’s hit its finances.

for the deepest economic contraction in two decades, Saudi Arabia is keeping the focus on fiscal adjustments to contain a deficit that could approach levels last seen after the previous oil crash. The total savings announced on Monday are equivalent to about 10% of expenditure initially planned in this year’s budget.

Government aid to the neediest Saudis will remain, Al-Jadaan said. Shortly before the measures were announced, King ordered a payment of 1.85 billion riyals to be distributed to state welfare recipients to mark the Islamic holy month of Ramadan. The payments will include 1,000 riyals for each family and 500 riyals for each dependent.

The kingdom has announced other stimulus programs over the past two months, including interest-free loans, a discount on electricity bills, deferments of fees and a government guarantee to cover 60% of salaries for some Saudi workers in the private sector. 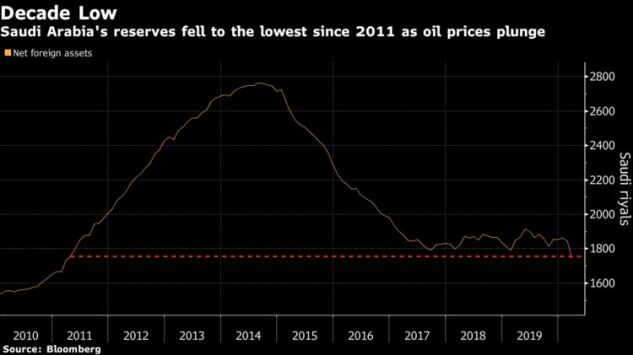 If the government achieves the 100-billion-riyal goal as outlined in its austerity measures, the fiscal shortfall for 2020 could narrow to 13% of gross domestic product from an estimated 15%, according to , head of Middle East and North Africa research at Emirates NBD, Dubai’s biggest bank. The deficit reached 4.5% last year, with Saudi Arabia initially targeting it at 6.4% in 2020.

The meltdown in global oil markets has had wide-ranging implications for Saudi Arabia. State oil giant Saudi Aramco is in early talks about further staggering payments for the acquisition of a controlling stake in Saudi Basic Industries Corp. as the collapse in oil prices puts pressure on its finances, according to people with knowledge of the matter. It’s also weighing the possibility of reducing the $69 billion price tag on the deal, one of the people said.

The government announced the new austerity measures overnight, shortly after the dawn call to prayer that marks the beginning of the daily fast for Ramadan.

Among the biggest moves, the country’s VAT will be increased to 15% from 5% starting July 1. The measure is likely to be controversial among citizens who were just getting used to the new tax, rolled out in 2018. It also comes at a time when many people are grappling with reduced incomes from furloughs and pay cuts as businesses struggle to survive.

Al-Jadaan said the tax increase won’t have much impact on revenue this year because people are spending less under the curfew, but it “will help more next year and the year after as we get out of the COVID-19 crisis.”

Saudi Arabia acted in coordination with some of its neighbors when the VAT levy was first introduced in 2018. While it’s unclear if other Gulf economies will now follow suit and raise it higher, the United Arab Emirates currently has to increase the tax level from 5%, according to its Finance Ministry.

Bahrain, which only introduced VAT at the start of last year, is “unlikely to raise it in the near term,” making the island nation and the U.A.E. “marginally more competitive” relative to Saudi Arabia, according to Emirates NBD. The remaining members of the Gulf Cooperation Council -- Kuwait, Oman and Qatar -- have yet to implement the tax.

Beginning in June, the Saudi government will also end a cost-of-living allowance paid to state workers. The 1000-riyal monthly allowance was granted in 2018 after complaints from citizens about the financial impact of austerity measures taken during the last oil price rout. However, the allowance was supposed to be temporary, so the government decided to cancel it, Al-Jadaan said, calling the effect “very limited.”

“What we have seen from the announced measures are the ones that the team -- both economists and other experts -- thought would be the least damaging to the economy and the fiscal strength of the country,” he said.

Capital spending will also be affected as the government delays or trims some projects. Part of that is due to the inevitable impact of coronavirus-related supply chain issues and safety measures, Al-Jadaan said. He gave the example of a project to expand the holy mosque in Mecca -- the of coronavirus cases in the kingdom -- which the government “had to slow down significantly” to protect the health of construction workers.

Some of the kingdom’s megaprojects, which include plans to build a tourism hub on the Red Sea and an “entertainment city” outside of Riyadh, will have their timelines extended.

“It may not be as fast as it used to be, but they are continuing,” Al-Jadaan said.

Spending will also be reduced on some programs under Crown Prince ’s “Vision 2030” economic transformation plan.

Finally, a committee was formed to study the salaries and benefits paid by a slew of new government entities that have been created outside the civil service umbrella, where employees are often paid significantly more than typical state workers. Such entities include the Vision 2030 programs. The committee was told to give its recommendations within 30 days.

“This committee is going to look at the salary scales and the benefits of these new entities and bring about more rationalization -- and ensure that we don’t have excess wages or unnecessary benefits that are distorting the labor market,” he said.

To contact the editors responsible for this story:
at nrazzouk2@bloomberg.net