Treasury Secretary withdrew the U.S. from international talks over a digital tax deal after failing to reach an agreement with countries looking to place levies on the revenue of American tech companies, U.S. Trade Representative said.

“We were making no headway and the secretary made the decision that rather than have them go off on their own he would just say we’re no longer involved in the negotiations,” Lighthizer said Wednesday during a House Ways and Means Committee hearing.

Treasury Department spokeswoman said in a statement that the U.S. is suggesting “a pause in the talks” so that governments can focus on responding to the COVID-19 pandemic and reopening their economies.

The decision suspends the Trump administration’s previous approach to find a global deal and could increase the likelihood that technology giants , ’s Google and could face a wave of foreign taxes. 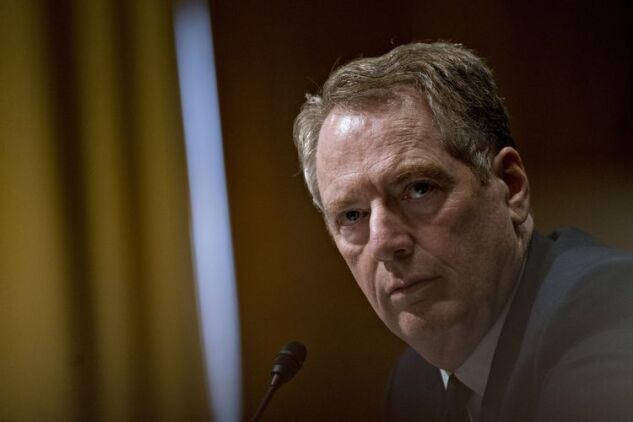 “We have a situation where a variety of countries have decided that the easiest way to raise revenue is to tax somebody else’s companies and they happen to be ours,” Lighthizer said. “The United States will not let that happen.”

The Financial Times reported earlier that Mnuchin notified European colleagues of the U.S. decision in a June 12 letter.

A spokesman for France’s Finance Ministry said in an email that France had received the letter and that the government is working on a response with other EU countries.

Lighthizer didn’t rule out a possible settlement that avoids an escalation that could involve U.S. tariffs.

“The answer is that we need an international regime that not only focuses on certain size and certain industries but where we generally agree as to how we’re going to tax people internationally,” he said. “So I think there is clearly room for a negotiated settlement.”

The Organization for Economic Cooperation and Development is trying to find agreement among almost 140 countries on a global tax overhaul to address how multinationals -- particularly big tech companies -- are taxed in the nations where they have users or consumers. An international deal would prevent dozens of countries implementing their own versions of digital taxes that would likely mean companies would pay more. The OECD declined to comment.

Several European countries -- including Austria, France, Spain, Hungary, Italy, Turkey and the U.K. -- have already announced plans for a digital services tax. Many others, including the Czech Republic, Slovakia, Latvia, Norway and Slovenia, have discussed implementing one. India in April expanded a digital tax that’s been in place since 2016, making it much broader than those in Europe.

The U.S. has sought to use tariffs to repeal or delay proposed digital levies. Lighthizer announced a series of new tariffs on French goods last year in response to France’s digital tax. The two countries reached a truce this year to delay collection of both levies until the end of 2020 to give the global talks more time.

The U.S. also announced investigations into Austria, Brazil, the Czech Republic, the EU, India, Indonesia, Italy, Spain, Turkey, and the U.K. this month that could also lead to more tariffs.

France’s Finance Minister has said the U.S. has been the lone holdout in reaching a deal, but still thinks it’s possible to have an agreement this year.

“The last state that is blocking an agreement on digital taxation at the OECD is the United States,” said Le Maire said at a French Senate’s finance committee meeting last week.

The plan under discussion includes two key pillars. The first portion would give countries the right to tax profits based on sales within their borders. The second would implement a global minimum tax to prevent countries from lowering tax rates to compete for companies.

OECD officials are pushing to stick to an original deadline to reach an agreement this year, despite setbacks from the coronavirus pandemic, however some officials have already acknowledged the project could spill into 2021.

The U.S.’s involvement in the international negotiations had been a rare area of bipartisan agreement in Washington. Senators and , the Republican chairman and top Democrat on the Senate Finance Committee, both had expressed support for finding a global solution. Grassley said at a hearing of the panel Wednesday that an OECD agreement is the best way to resolve the digital tax issues.

“But those negotiations should not be rushed, especially during the current health and economic situation,” Grassley said. “It’s better to take time to get a fair and equitable solution, so I support Treasury continuing to negotiate on these important global tax issues.”

(Updates with Treasury statement in the third paragraph.)