Opponents of the digital advertising tax, including the big tech companies, argue that it violates the Internet Tax Freedom Act.
Photographer: David Gray/Bloomberg

The U.S. Chamber of Commerce, the Internet Association, NetChoice, and the Computer and Communications Industry Association filed a detailed complaint in federal court in Maryland Thursday, asserting the new “Digital Advertising Gross Revenues Tax” is clearly discriminatory. The suit lands most of its blows under the Internet Tax Freedom Act, which prohibits discriminatory taxes on electronic commerce. Without a similar tax on newspapers, televisions, and other channels, the trade groups assert Maryland’s tax is “a punitive assault on digital,” “is illegal in myriad ways,” and “should be declared unlawful and enjoined.”

The lawsuit could have a chilling effect on several states currently considering their own laws taxing digital advertising including New York, Montana, Nebraska, West Virginia, and Washington.

“Part of the idea was to send a shot across the bow and tell these other states they’re in for some litigation,” Richard Pomp, professor of tax policy at the University of Connecticut School of Law, said. “I suspect other states will wait and see how this plays out before they do anything.”

The suit further objects to burdens placed on social media, search engine, and online sales companies such as Amazon, Facebook, Google, and Twitter for their business activities occurring beyond Maryland — a violation of the Commerce and Due Process Clauses of the U.S. Constitution.

“Maryland’s law is clearly unconstitutional and violates the Internet Tax Freedom Act,” said lead counsel for the plaintiffs Stephen P. Kranz, a partner in the Washington office of McDermott Will & Emery LLP. “Everyone was hopeful that we wouldn’t need to resort to the courts, but clearly we’ve had to do so, and we’re hopeful the law will be struck down,” he said.

Last Friday, the Maryland Senate voted 29-17 to override an earlier veto by Gov. Larry Hogan (R) to H.B. 732, creating the gross revenues tax. The House of Delegates voted to override the veto the day before. A spokesman for Hogan said the administration fully expected the tax to be challenged.

“The complaint highlights how not only are there real policy problems with the digital ad tax, but also serious legal questions surrounding it as well,” Michael Ricci, Hogan’s communications director told Bloomberg Tax. “The governor thinks the tax is a very bad idea—especially in the middle of a global pandemic—which is why he vetoed it in the first place.”

H.B. 732 imposes the highest rate—a tax of up to 10%—on digital ads placed by the biggest Internet advertisers, like Google and Facebook.

A fiscal analysis drafted by Maryland’s Legislature estimates the change would generate $250 million annually. States have long eyed untaxed revenue from Internet powerhouses, though Maryland has been the most aggressive. 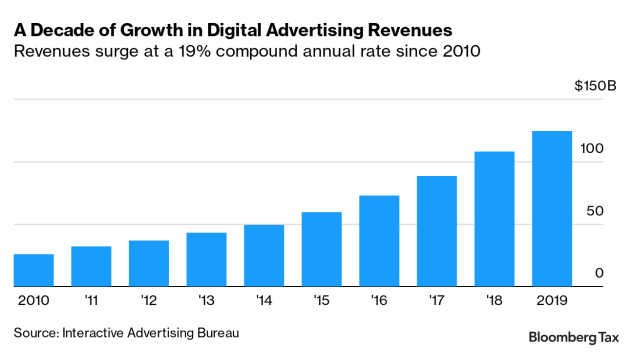 The trade groups used their lawsuit to object to the new law on both legal and philosophical grounds, asserting the tax interferes with an online business model that is largely free to users.

Caroline Harris, the chamber’s vice president of tax policy, called the law “tax policy at its worst.” She said the lawsuit would “protect pro-business interests not only in Maryland, but nationwide.”

Tax scholars and even supporters of Maryland’s digital ad tax expected a trip to federal court would be necessary if the Maryland legislature overrode Hogan’s veto.

“It’s disappointing, but not surprising, that these massively profitable corporations will do everything in their power to avoid paying their fair share,” said Rep. Eric Luedtke (D), a bill sponsor and Democratic majority leader in the House of Delegates.

“We knew big tech didn’t like to pay taxes” and the lawsuit was expected, said Sen. Jim Rosapepe (D). “I have a lot of confidence in the American judicial system that the courts will see through this” so big tech starts to pay taxes on their services.

The Legislature had been warned the legislation was “full of constitutional problems,” Pomp, the law professor, said."The fact that they knowingly went forward with a defective bill suggests this is a political statement rather than a serious tax,” Pomp said.

(Adds details of the complaint throughout and comments from a U.S. Chamber of Commerce office, lawmakers, and a tax scholar.)