Since launching the California Competes Tax Credit in 2014, the state has awarded $1.3 billion in credits to 1,121 companies that promised to expand their footprint in the state instead of going elsewhere. Above: Tesla store in Rocklin, Calif. on July 21, 2021
Photographer: David Paul Morris/Bloomberg

California’s experiment in creating an accountable and transparent business income tax credit to reward companies for job creation and capital investment seems to be working, even though half the companies winning the credit aren’t able to keep their promises.

Since launching the California Competes Tax Credit in 2014, the state has awarded $1.3 billion in credits to 1,121 companies that promised to expand their footprint in the state instead of going elsewhere. Businesses from craft breweries and garage door installers—and increasingly, corporate giants like Tesla Motors Inc. and Lockheed Martin Corp.—have agreed to fulfill commitments within five years or forgo their credit awards.

That safeguard is an accountability feature absent from tax incentive programs in many other states.

“From a taxpayer perspective, that’s working,” said Dee Dee Myers, director of the Governor’s Office of Business and Economic Development, which oversees the credit. “We don’t actually award these credits until people actually do what they signed up to do.” 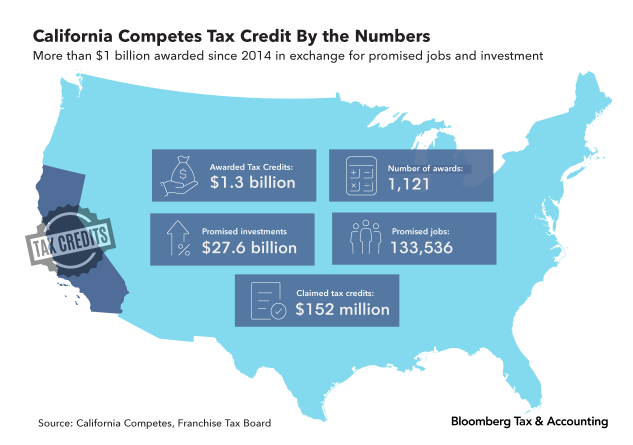 The program isn’t an incubator for small businesses, but is an incentive to create jobs that wouldn’t have to be in California. Program officials negotiate awards with companies deciding whether to locate or grow in California instead of another state or country.

Companies can start claiming the credits on their state income tax returns as they meet their annual milestones for jobs and investments. If they breach their contracts, the awards are rescinded—California Competes uses the term “recaptured"—and go back into the pot to be awarded to another company.

According to data from California Competes, about half of the awards from the program’s first two years and one-third from the third year have been recaptured. Program officials expect the trend to continue as recent-year award contracts run their course, mainly due to the program’s safeguards and uncertainties businesses face when predicting their trajectories.

The recapture rate so far shows the program has teeth, and that’s an unambiguously good thing, said David Neumark, professor of economics at University of California Irvine and co-director of its Center for Population, Inequality, and Policy.

“It doesn’t mean no jobs are being created, it just means they’re falling short of their goals,” he said. 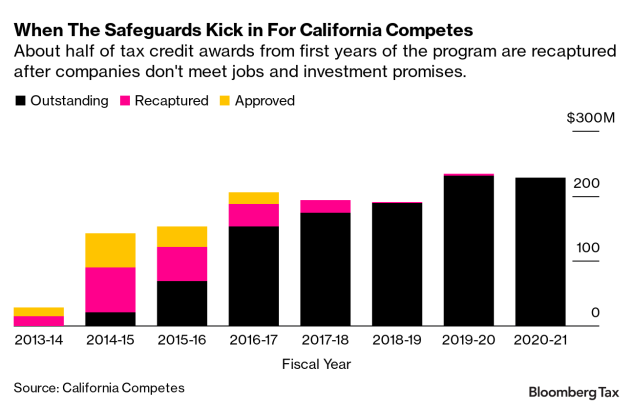 Neumark and two colleagues published a working paper with the National Bureau of Economic Research in March using census tract data, finding each job created with California Competes incentives has a multiplier effect that results in 2.5 jobs.

“If ever a local program might work, this is the design you want,” Neumark said.

The recapture rate in the program’s first few years seems high, especially because the credit has been available in non-recessionary years, said Greg LeRoy, executive director at Good Jobs First, a nonprofit organization that tracks tax incentives and government subsidies. But the fact that companies must perform to get the credit is a positive feature, he said.

“It’s not unusual for programs to have sloppier outcomes in the early years,” he said.

Lawmakers and former Gov. Jerry Brown (D) created California Competes in 2013 with the recapture provisions and other guardrails to replace the 27-year-old enterprise zone tax credit. That program, which gave employers in distressed areas tax credits for hiring disadvantaged workers, was costing the state hundreds of millions of dollars a year, and the cost was growing unchecked.

Brown and other critics, including labor unions, said the EZ program was mainly giving employers tax credits for hiring decisions they would have made anyway. The program also allowed employers to get the credit for moving jobs from one area of the state to another with no net gain in economic activity.

To overcome the flaws in the EZ program but stay competitive with other states offering incentives, lawmakers built California Competes from scratch. They tried to prevent windfalls for companies by asking them to answer the “but-for” questions left out of many state and local tax incentives aimed at economic development: If it weren’t for this tax incentive, would a company leave the state or not expand in California? Or, without the credit would a company expand in California anyway?

“This but-for question is quicksand,” LeRoy said. “No state can crawl into the black box of corporate decision making.”

Program officials vet company applications to see if their plans and competing offers from other states are legitimate. In some cases, company officers attest under penalty of perjury that the jobs and investment wouldn’t happen without the credit.

A five-member committee made up of appointees from the governor’s office and legislative leadership reviews and approves the awards at public meetings. All awards are posted in a database on the Go-Biz website. Annual funding for the awards is capped at $180 million, although lawmakers and Newsom agreed to increase the cap to $270 million a year for the next two years as part of Covid-19 relief efforts for businesses.

The Franchise Tax Board reviews books and records to verify companies are meeting their milestones and tracks how many awards eventually appear on corporate tax returns. As of March 2021, companies had claimed $152 million in credits on 3,261 returns.

An examination of program data shows the numbers of applications and individual credit awards have fallen over time, along with the percentage of applications approved by the board. California Competes had a surge of applications in 2020. However, many came from companies not qualified for the program but grasping for help during the pandemic, according to program officials.

Larger dollar awards are becoming more common, along with an increase in the number of promised jobs and capital investment per award. Most companies receive a tax credit once, but 21 companies have received credits twice. 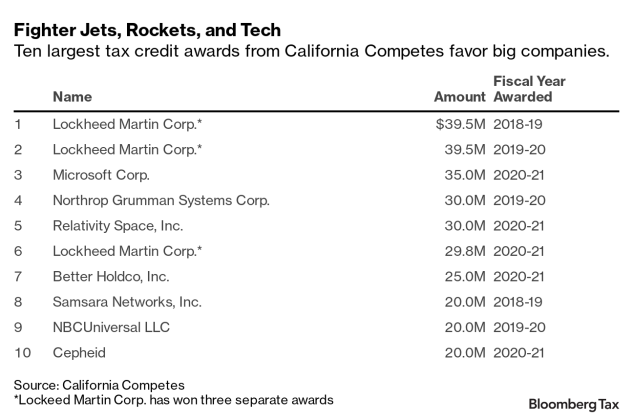 California Competes officials aren’t apologetic about the trend. The program’s purpose, according to the website, is to “attract and retain high-value employers in California in industries with high economic multipliers and that provide their employees good wages and benefits.” Those employers are often large, sophisticated companies.

Elimination in 2018 of a requirement that one-quarter of the awards go to businesses with less than $2 million in annual revenue is also a factor in the trend toward larger awards to established companies, according to program officials.

A tax incentive skeptic said many large companies are using the same arguments to California Competes that they are in pitches to other state and local governments for tax incentives. Christopher J. Girod, founder and managing principal at Responsible Economic Development Incentives LLC, advises governments to prevent companies from gaming the incentives system.

California Competes may hold companies more accountable than programs elsewhere, but it still awards credits without knowing if they change company decisions, he said.

“Nine out of 10 of these big companies are going to do these projects regardless,” Girod said. “You’re just giving money out to big corporations that don’t need it. They gamed you.”

No perfect screen is available to figure out what the companies would do, Myers from the governor’s office said. Some of the companies that don’t get the credit leave the state and some stay.

“We try to screen for the ones that are really serious about it and that really do have a choice,” she said. 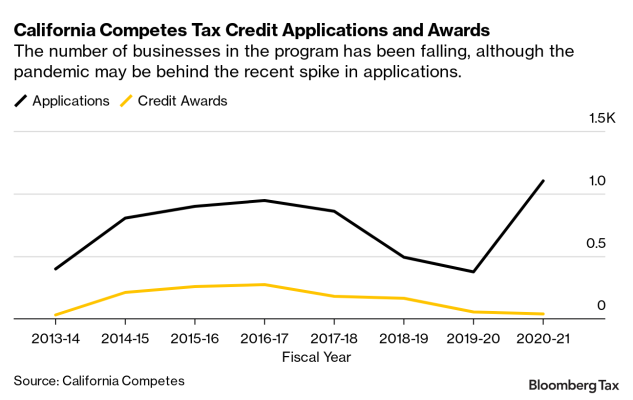 The Legislative Analyst’s Office, the nonpartisan fiscal and policy adviser to the state Legislature, remains unconvinced that the program isn’t providing windfalls to companies for hiring and investment they would do with or without the credit.

The analyst recommended in 2017 that lawmakers end the program. Instead, the Legislature reauthorized it until 2023 but strengthened requirements that applicants demonstrate they wouldn’t create jobs without a credit.

The 2018 changes may be helping Go-Biz better target credits to companies more likely to create a net increase in jobs, the LAO said in its most recent review of the program in March 2020. But the analyst has cautioned lawmakers against expanding the program further and said the boost in funding for the next two years wouldn’t help businesses hurt the most by the pandemic.

Neumark, the UC professor, said he tells officials in other states to emulate California Competes.

“I am not a cheerleader for these programs by any means,” Neumark said. “This one is successful.”

(Updated with information about companies receiving more than one credit in 22nd paragraph. Previous update corrected timeline for claiming the credit in sixth paragraph.)