The cornucopia of pumpkin-themed products crowding grocery shelves this holiday season—coffees, pies, liquors and even dog food—comes with a surging premium, economist say. But that’s not discouraging consumers.

Of course, we’re talking about the “pumpkin spice tax,” a relatively new but stubborn and increasingly more expensive feature of the economy that seems to come and go during the months surrounding Thanksgiving and Halloween.

The consumer research website MagnifyMoney.com has documented the surcharge and the burden it imposes on products sold from six national retailers and four restaurant chains, including Starbucks, which practically invented the culinary trend 17 years ago with its popular “PSL,” or pumpkin spice latte.

MagnifyMoney pegged the pumpkin spice tax at 8.8% across 40 consumer products. That’s a 10% increase from 2017 when MagnifyMoney, a subsidiary of the credit marketplace LendingTree, first ran the study and discovered a surcharge on pumpkin spice items. A separate analysis of restaurants found a 10.1% markup on pumpkin spice beverages. 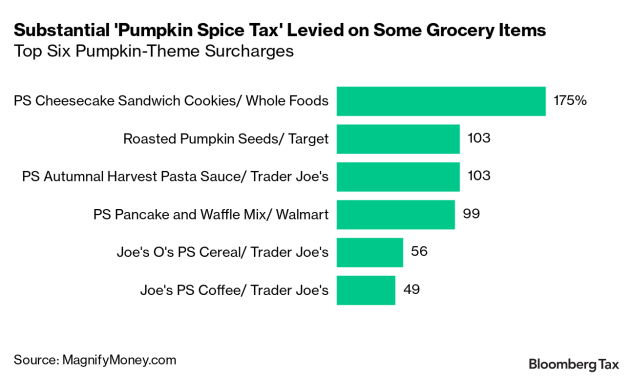 No Tax and No Pumpkin

Before dipping into the economic research, there are two things you need to know about the pumpkin spice tax: it’s not really a tax and it bears only a flimsy relationship to pumpkin.

The pumpkin spice tax is imposed by retailers rather than revenue agencies, so it can’t be classified as a true tax. The price differential is better described as a markup or a premium, said Ulrik Boesen, senior policy analyst at the Tax Foundation.

And pumpkin spice operates as a mystical alchemy of flavors that don’t include the “unremarkable” pumpkin, said Kantha Shelke, a certified food scientist and a senior lecturer at Johns Hopkins University.

Classic pumpkin spice is derived from a combination of cinnamon, ginger, nutmeg, cloves and allspice. Those foundational flavors are enhanced when blended with sugar and butter during cooking, evoking a rare emotional response, Shelke said, suggesting warmth, comfort, and harmony.

“The food industry and the flavor industry have done a remarkable job of capturing pumpkin spice and putting it into various food products,” Shelke said. “And it’s only available for a short time. So there’s this element of anticipation. People wait for it. It takes you back to warm feelings about the holidays.”

Shelke gives credit to Starbucks for creating a consumer juggernaut with the introduction of pumpkin spice themed beverages in 2003. Pumpkin spice lattes, which actually contain small amounts of pumpkin puree, are now sold in 50 countries around the globe.

“Starbucks was one of the first companies to embrace fall flavors and products, and more specifically pumpkin spice,” said company spokeswoman Danielle Winslow in an emailed message. “Pumpkin Spice Latte, PSL, remains Starbucks most popular seasonal beverage of all time with more than 424 million beverages sold in the U.S.”

So what kind of surcharge do consumers pay for those warm and fuzzy feelings?

The study by MagnifyMoney found the markup is as high as 175% for a package of pumpkin spice cheesecake sandwich cream cookies, when compared to the same chocolate-theme product. The premium is around 100% for pumpkin spice pasta sauce, pancake mix and pumpkin seeds.

The study also found some examples of discounting, such as a 22.8% price cut on boxes of grain-free pumpkin spice granola and a 20.7% discount on pumpkin shape sugar cookie dough, compared against Scooby-Doo shape cookie dough.

MagnifyMoney also analyzed the cost of pumpkin spice beverages sold at restaurant chains. The markup was highest at Tim Hortons at 20.1%, followed by Starbucks at 15.9% and McDonald’s at 1.8%. The analysis found no difference in price between the pumpkin and non-pumpkin theme beverages sold at Dunkin’ Donuts.

Starbucks Chief Executive Officer Kevin Johnson said the company’s “pumpkin spice platform” achieved “a record high in average daily units” for the 2020 fiscal year during an Oct. 29 earnings call. Annual sales of pumpkin-flavored products rose to $488.8 million in 2018, a 15.5% jump from 2017, according to a report by the consumer research company Nielsen.

Still, a potent faction of pumpkin spice cynics has emerged, including comedian John Oliver who has derided the pumpkin spice latte as “the coffee that tastes like a candle” during his show “Last Week Tonight.”

“We tolerate pumpkin spice because we like the fall,” Oliver observed during a 2014 comedy segment. “It’s the best season because you get to stop thinking about how weird your legs look like in shorts.”