There may be an unwelcome surprise in your shopping cart this Cyber Monday: new taxes.

They’ll apply if you live in one of the states that have started requiring out-of-state vendors to collect and remit sales tax if they surpass an established selling threshold.

If you live in New Jersey, for example, and purchase something from a retailer that has more than $100,000 in in-state sales or 200 separate transactions, expect to pay 6.625 percent sales tax. This means that an Amazon Echo on sale for $79.99 may cost $6 more for New Jersey residents than for people buying in Virginia or New York.

Cyber Monday, which falls on Nov. 26 this year, is one of the largest retail events of the year. Last year, a record $6.59 billion was spent, according to Adobe Analytics. This was an increase of 16.8 percent from 2016, making it the largest mostly U.S.-based online shopping day in history, said Practical Ecommerce, an organization that provides analysis and strategy for online merchants.

Retailers offer huge sales on millions of items, but because of the U.S. Supreme Court’s June decision in South Dakota v. Wayfair, the discounts may be a little less than they appear.

Twenty-three states have begun enforcing remote sales tax laws in response to the high court’s ruling, which tossed out the court’s 1992 physical presence threshold for when states could tax those sales.

If you’re a resident of a state that hasn’t started enforcing one of these laws, retailers may still voluntarily collect the tax, but aren’t legally required to. So there may not be sales tax on those purchases.

Ten other states have enacted marketplace-facilitator laws, which require e-commerce platforms like Amazon.com Inc. or Etsy Inc. to collect and remit sales tax on behalf of third-party sellers using the platform. The marketplace facilitator is required to collect the tax when a seller or the marketplace itself crosses an established threshold.

The thresholds vary. For example, in Minnesota, marketplaces must collect sales tax on behalf of remote third-party sellers that sell more than $10,000 worth of goods into the state in a 12-month period. Alabama requires a facilitator to collect sales tax on behalf of third-party sellers if the marketplace itself has more than $250,000 in in-state sales. 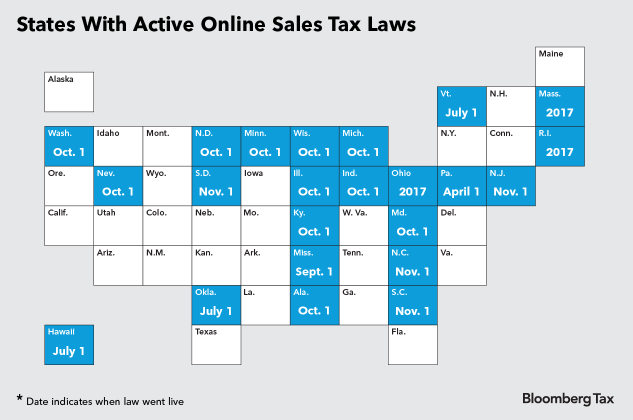 Is Cyber Monday Worth It?

From a tax standpoint, there isn’t a huge benefit from Cyber Monday purchases, said Jacob Lutz, a senior accountant at Cerini and Associates LLP in Bohemia, N.Y. Ultimately, most buyers will pay tax on items whether in stores or online.

It may look like a price increase, but realistically these customers should have been reporting use tax to the state—so it should be a wash for the consumer, Jennifer Weidler Karpchuk, senior counsel at Chamberlain, Hrdlicka, White, Williams & Aughtry in Philadelphia, told Bloomberg Tax in an email.

However, most people weren’t actually reporting and paying their use tax obligations, she said.

People will now be paying what they should have been charged all along, Lutz said.

“A couple extra dollars of tax isn’t going to deter me from shopping online,” he said. “The true appeal to shopping online on Cyber Monday is the fact that there are no lines, no screaming, and no dress code.” 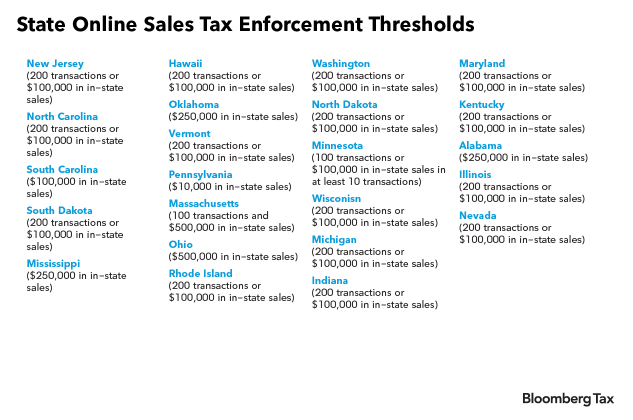