A coach's clipboard is seen before the Butler Bulldogs take on the Texas Tech Red Raiders in the first round of the 2016 NCAA Men's Basketball Tournament March 17 in Raleigh, N.C. Teams playing in the tournament earn tax-free money for their conferences.
Photographer: Grant Halverson/Getty Images

An NCAA Final Four appearance can be the highlight of a lifetime for a college’s athletic program. But there’s a financial lure as well: each Final Four team has already locked down over $8 million in tax-free funding for its conference.

Auburn University, Michigan State University, Texas Tech, and the University of Virginia will face off April 6. Two teams will advance to the NCAA Men’s Basketball final April 8, capping off a weeks-long March Madness tourney. Every team that makes the tourney receives funding pooled from tournament revenue.

For every game played up to the Final Four, the funding shares for conferences increase, which means all-time high contributions from Auburn and Texas Tech—both schools made their first-ever Final Four appearance.

While this amount changes yearly, the reported payout for the 2019 tournament is about $1.69 million, disbursed in six yearly installments of about $281,000. For every additional game played in the tournament, a team gains an additional $1.69 million to be paid out over six years.

The NCAA is a nonprofit organization, so income received by the association is tax-exempt, according to Stacey Osburn, NCAA director of public and media relations. This includes millions from television contracts and merchandise sales.

Osburn told Bloomberg Tax she believes most if not all Division I conferences are also nonprofits, which would also exempt them from income taxes. 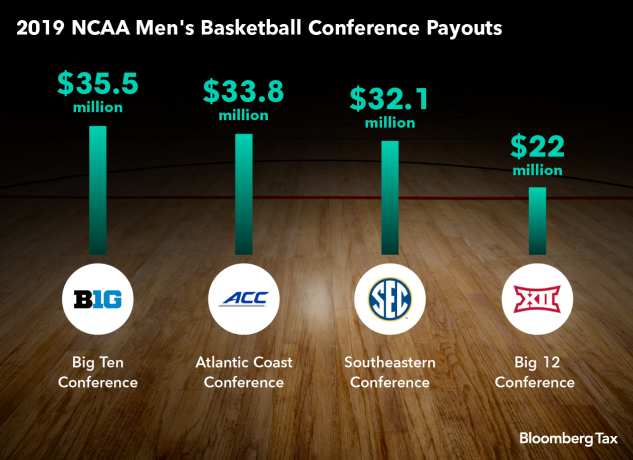 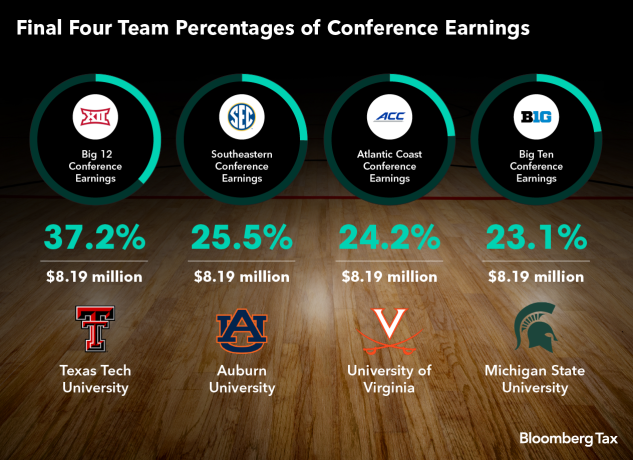 Each of the Final Four teams earned $8.19 million for their respective conferences.

Sometimes conferences benefit from a sole team. In 2018, eleventh-seeded “Cinderella” Loyola Chicago secured 100 percent of the funding for the Missouri Valley Conference.

This year’s Final Four marks the first time that viewers can legally wager on the action in eight states. The American Gaming Association estimated Americans will wager $8.5 billion both legally and illegally throughout the 2019 NCAA tourney.

In New Mexico, only tribal casinos can take sports bets. Sports betting is legal in Arkansas, New York, Oregon, and the District of Columbia, but those jurisdictions aren’t taking bets yet. Nearly another two dozens states are considering legalizing sports betting, according to the AGA.

Ryan Prete
Reporter
States to Get Tax Slice of $8.5B in March Madness Wagers
© 2020 The Bureau of National Affairs, Inc.
All Rights Reserved