House Democrats proposed a $3 trillion virus relief bill Tuesday, combining aid to state and local governments with direct cash payments, expanded unemployment insurance and food stamp spending as well as a list of progressive priorities like funds for voting by mail and the troubled .

While there is little chance of the aid package gaining Senate approval and President ’s signature as written, passage in the Democratic-led House would give Speaker a marker to set down at the same time both parties are positioning themselves for congressional elections less than six months away.

It would also be the opening bid in negotiations with the Trump administration and Senate Republicans.

“Not acting is the most expensive course,” Pelosi said at the Capitol. “We face the biggest catastrophe in our nation’s history.” 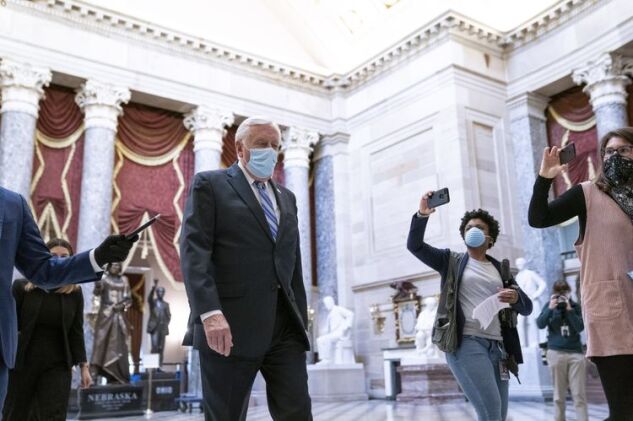 The bill is a follow-up to the $3 trillion Congress has already spent on four bills in response to the crisis caused by the coronavirus pandemic, which has ground the world’s biggest economy to a halt.

Republicans aren’t the only hurdle for Pelosi. Majority Leader announced plans to have the House vote on the legislation Friday, but members of the party’s liberal wing want to delay that because the bill may not go far enough to address their priorities.

Representatives of Washington and of Wisconsin, the leaders of the Congressional Progressive Caucus, asked Pelosi in a letter Tuesday for a meeting about “any amendments that might be needed to ensure that it truly reflects the priorities and the work of the entire caucus.”

A rebellion by progressive Democrats could seriously hamper attempts to get it through the House in the face of united Republican opposition. House GOP leader condemned the bill, which was written without Republican input.

“A record number of Americans are out of work. Yet while Americans are searching for answers, House Democrats are releasing a liberal wish list that has no chance of becoming law,” McCarthy said.

Even if the bill passes the House, it may take until June or later before any new deal is struck. No formal negotiations have taken place since the last relief bill was passed, though Trump chief economic adviser has said he’s talking with lawmakers of both parties on priorities.

Trump said last week he’s in “no rush” to get another aid package, but last week’s jobs report that showed employers cut 20.5 million jobs in April, and statements from the president’s economic advisers that the unemployment rate will hit 20% or more, are certain to add urgency to talks.

Senate Majority Leader on Tuesday dismissed the bill as a “big laundry list of pet priorities” and indicated the GOP would ignore the Democratic proposal for now.

“What Nancy Pelosi is proposing will never pass the Senate,” Wyoming’s , the third-ranking Republican in the chamber, told reporters.

Democrats also propose providing $1,200 in cash payments to individuals and $1,200 for dependent children -- up to $6,000 per household -- at a cost of $599 billion. The bill would make dependent children up to the age of 24 eligible for payments, responding to complaints that college students were left out of the earlier round. It would also allow undocumented immigrants to receive payments.

The legislation also would extend a $600 weekly increase to unemployment insurance into next January.

One of the provisions that has been highlighted by Pelosi is $200 billion to fund what Democrats describe as “hazard pay” for essential workers who’ve had to risk exposure to the virus as they stay on the job while much of the rest of the country has been shut down.

The House bill wouldn’t add additional funding for the popular Paycheck Protection Program for small businesses. But it would extend the program to Dec. 31 from June 30 and make other changes regarding which firms are eligible and how loan proceeds can be spent. The loans become grants if they’re spent on payroll and certain expenses within eight weeks after they’re received to keep workers employed.

Many restaurants and other firms had complained that eight weeks wasn’t practical because they won’t be reopened or back 100% during that time, and the House bill would extend the period to 24 weeks after a loan is received or Dec. 31, whichever is earlier. The bill would also allow firms to rehire workers by the end of the year rather than by June 30 to qualify for loan forgiveness.

The proposal would also extend the loans to a greater array of nonprofits, including local tourism bureaus that have suffered alongside the travel industry, as well as some trade associations, professional organizations, chambers of commerce and other groups. Individual physical locations of newspaper publisher groups, radio stations and TV broadcasters would also be eligible when they qualify as small businesses under Small Business Administration rules.

To ensure the smallest firms get funding, the House measure would set aside at least 25% of remaining funds for businesses with 10 and fewer employees -- and devote any returned or canceled loan amounts to those firms -- plus 25% for nonprofits. It would also provide an additional $10 billion for grants through the separate SBA Economic Injury Disaster Loan program.

There are numerous tax provisions in the legislation.

The bill would greatly expand a tax credit included in the last virus relief package that gives employers tax breaks for keeping workers on the payroll. The new version would give employers a credit worth up to $12,000 per employee per quarter, an increase of $5,000 per worker for the remainder of the year. The credit would be a more targeted way to help workers than Trump’s idea to cut payroll taxes, according to proponents.

The legislation also makes a technical tweak to the treatment of forgiven Paycheck Protection Program loans that could deliver billions of dollars in tax savings to small businesses. The legislation would allow companies to deduct the payroll, rent and other costs that the PPP loans covered. The IRS had ruled that those expenses are not deductible if the loan is forgiven.

The plan also includes some political priorities for Democrats from before the pandemic. It would suspend the cap on state and local tax, or SALT, deductions for two years. Trump’s 2017 tax law imposed a $10,000 cap on those tax breaks, which Democrats, particularly those from high-tax New York and New Jersey, have been seeking to repeal since the law passed. Republicans have resisted raising the cap, saying that would only help the wealthy.

The legislation would partially repeal a tax break included in the last rescue plan that would allow businesses to use losses to offset profits to generate a refund from the . That provision has since garnered scrutiny from some Democrats who say it’s a giveaway to corporations and the wealthy, though the measure wasn’t controversial when it passed in March.

For families with children, the bill increases the current $2,000 child tax credit to $3,600 for children 5 years old and under or $3,000 for children age 6 to 17. The additional money would be sent upfront to families, instead of making them wait until next tax season to claim it.

Among the other provisions in the proposal:

In one example of Democrats using the wide-ranging package to reach beyond the immediate response to the pandemic, it includes a safe harbor provision for banks that provide services to cannabis companies, something long sought by the industry. Banks would be shielded from prosecution under federal drug laws for serving the now cash-based sector in states where the cannabis trade is legal.

But some Republicans have outright opposed aid to states, while other GOP lawmakers have said they would back some assistance with limits to ensure that mismanaged pension funds for state workers are not bailed out, a position that mostly targets Democratic-leaning states like New York and Illinois.

McConnell said Tuesday that as more states reopen, the Senate will instead act on separate legislation intended to limit legal liability for businesses.

“Our legislation is going to create a legal safe harbor for businesses, nonprofits, governments, workers, and schools who are following public health guidelines to the best of their ability,” McConnell said on the Senate floor.

The separate Senate bill could set the framework for a compromise between the parties, with Democrats saying the state and local aid as well as direct payments are their must-have items.

Pelosi in a Monday television appearance said that while the House will not be cavalier about granting legal protections, she is willing to have a conversation about it as part of a negotiation on the next stimulus deal.