The U.S. Capitol on Feb. 4, 2020. The House overwhelmingly passed and sent to President Donald Trump April 23, 2020, a $484 billion coronavirus aid package, even as members are already at odds over the next phase of rescue legislation.
Photographer: Stefani Reynolds/Bloomberg

The House overwhelmingly passed and sent to President a $484 billion coronavirus aid package, even as members are already at odds over the next phase of rescue legislation.

Thursday’s bipartisan 388-5 approval was delivered by lawmakers wearing masks and entering the House chamber under strict health precautions. Several members lamented people who’ve died from or are critically ill with the virus, including one lawmaker’s sister. Yet the day was also marked by partisan sniping.

The White House said that Trump would sign the legislation at noon on Friday. The measure would replenish funding to the Paycheck Protection Program for small businesses and provide other spending for hospitals and virus testing. It’s the fourth coronavirus-related spending measure since early March, totaling almost $3 trillion. 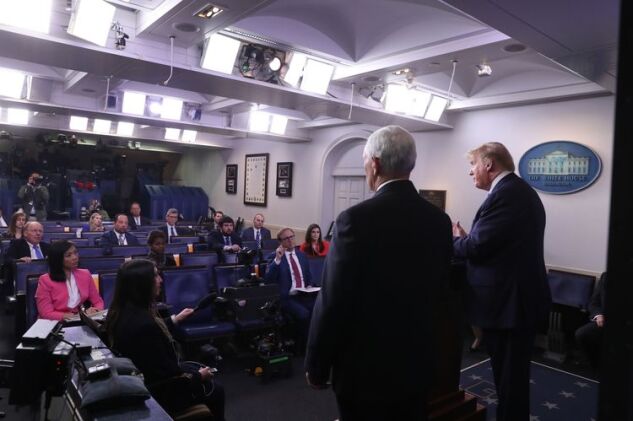 “This is really a very, very sad day,” said Speaker , giving a less-than-triumphant sendoff to the bill on a day when government figures showed about 4.4 million additional workers applied for unemployment benefits last week. “Our nation faces a deadly virus, a battered economy,” and hundreds of thousands of ill people. “Some died, and millions out of work,” she said.

The House also voted to create a special subcommittee to oversee the spending of coronavirus relief funds.

The House had not convened as a group since March 27. The floor action was carried out with carefully choreographed movement and spacing of lawmakers to guard against spreading any infection. Groups of 60 members entered the chamber in alphabetical order to vote, then exited on the opposite side.

Many members took the advice of Congress’ attending physician to wear masks. Between the two votes, the House took a short break so the chamber could be disinfected.

Four Republicans voted against the bill -- House Freedom Caucus Chairman of Arizona, of Colorado, of Georgia and of Kentucky. of New York was the lone Democrat to oppose it. , an independent from Michigan, voted “present.”

One of the most poignant moments came when Financial Services Chairwoman of California told colleagues her own sister was dying from a condition that’s claimed close to 50,000 American lives so far.

“I’m going to take a moment to dedicate this legislation to my dear sister, who is dying in a hospital in St. Louis, Missouri, right now, infected by coronavirus,” said Waters. Expressions of sympathy came from Democrats and Republicans.

Senator , a Massachusetts Democrat, said on Twitter that her brother died of coronavirus on Tuesday.

Representative , a Utah Democrat who tested positive for the virus and missed a House session in March, was back in Washington for the vote.

Much of Thursday’s debate centered on GOP claims that Pelosi and Democrats needlessly delayed agreement on the bill, and Democratic arguments that Senate Republicans under Majority Leader refused for too long to add items that were needed, only to agree at the end.

The final bill includes $320 billion to make new loans under the Paycheck Protection Program, which provides forgivable loans to small business that keep employees on the payroll for eight weeks. It sets aside $30 billion of the loans for banks and credit unions with $10 billion to $50 billion in assets, and another $30 billion for even smaller institutions.

The measure includes $60 billion in loans and grants under a separate Economic Injury Disaster Loan program, and makes farms and ranches eligible for the loans. Also, there is $75 billion for hospitals, with a significant portion aimed at those in rural areas, and $25 billion for virus testing.

Representative of Texas, the top Ways and Means Republican, said the plan “will have an immediate impact. And it deserves strong, bipartisan support.”

But Brady also accused Pelosi of delaying agreement on the final version while the economy faltered and more jobs were lost.

Pelosi responded that Democrats ensured the plan includes new aid for hospitals and virus testing, as well as stricter rules to send small-business aid to those with less access to bank loans.

Minority Leader retorted to Pelosi’s explanation: “Listening to it, the only thing I could think was what Shakespeare would say, ‘The lady doth protest too much, me think.”

These tensions are already building as lawmakers begin eyeing the next stimulus package. Pelosi has said a major package of aid for state and local governments must be in that bill to help them pay for first responders, police, health workers and others.

McConnell expressed strong doubts about such aid Wednesday, suggesting that states that provide generous benefits to their workers should be allowed to discharge their debts .

Democratic Representative of New York took a shot at McConnell during Thursday’s floor debate, saying, “The Grim Reaper is telling my state and others to drop dead. Well, I have a message for him: we’re going to fight you.”

McConnell occasionally has proudly called himself “the Grim Reaper” because so many Democratic House bills die in the Senate.

Congress isn’t scheduled to return to Washington until May 4, though negotiations and drafting of the next bill can take place without most lawmakers in town. A bipartisan House group also will look at proposals for proxy or remote voting.

In another emotional moment on the House floor Thursday, Representative , a Michigan Democrat, talked about the death from coronavirus of the 5-year-old daughter of a firefighter and a police officer in her district.

“It is immoral for us to walk way and take a month off when people and our neighbors are dying and losing loved ones,” she said.

(Updates with Trump signing bill on Friday, in third paragraph)