Heinz makes ketchup, not documentaries about gangs. Walmart’s ties to the television series “Empire” would seem to end at selling full-season DVDs.

Yet they and others among the biggest U.S. corporations and high-net-worth individuals have emerged as some of the primary beneficiaries of state tax breaks intended to attract the production of movies, TV series, and commercials.

Critics say it’s yet another way in which these incentives have far surpassed their intended purpose, with little oversight or accountability. In 12 states, entertainment companies that can’t use the credits—which is, most of them—are allowed to sell them in private transactions to buyers who can reap the tax breaks while having little or nothing to do with the projects.

With their budgets now in turmoil because of the coronavirus pandemic, some states are looking to end those breaks, even as others defend the credits as a necessary economic development tool that’s preferable to and less upfront than paying producers cash from state coffers.

“Transferable credits are the worst of both worlds,” said Nate Jensen, a government and economics professor at the University of Texas. “Companies that pay very little taxes in the state get a rebate for much, much more than they paid, so you are giving tax money to non-taxpayers. And because they are transferable, it builds up a whole set of interest groups.”

A Market for Millionaires

Here’s how they work:

A TV or film producer gets a tax credit as an incentive to make a movie, television program, or commercial in a particular state. Most states’ credits equal 20% to 30% of what a project spent in the state.

But if the production company has no permanent operations or tax liability in the state, it would owe little if any taxes. To them, the credit’s only value is as cash.

So, using specialized credit brokers, they sell the credit to companies or individuals with state tax bills high enough to make the credit worth claiming. Individuals or companies who buy the tax credits, typically at a discount, can claim the full credit to offset other taxes. The average for $491 million worth of credits sold over the past decade in Illinois, for example, is valued at $242,345.

“We’re calling productions—looking for tax credits, and then we’re looking for the buyers of the credit,” said Josh Lederer, chief operating officer of Fallbrook Credit Finance LLC, which brokers credits across the country. “It tends not to be buyers coming to us for tax credits, but us going and educating companies or other types of state taxpayers to how they can promote a state incentive program and receive a return at the same time.”

Credit sales are a buyers’ market, driven by the lack of alternatives for the producers to get something out of the incentives, one-year credit expiration dates, and states’ unwillingness to buy them back. The discount varies based on demand, as each state issues different amounts of credits. Some states average nearly 200 transactions a year.

“If you’re lucky enough to get one of them to buy your credit they’re going to do it at a tremendous discount,” said John Hadity, an independent producer and financier, formerly with Miramax Films.

While many types of tax credits get bought and sold, the film tax credit stands apart in how few of the original recipients can use them.

“For the company to realize value from it, it has to be able to sell them,” said Greg LeRoy, executive director of Good Jobs First, an advocacy group that tracks corporate subsidies. 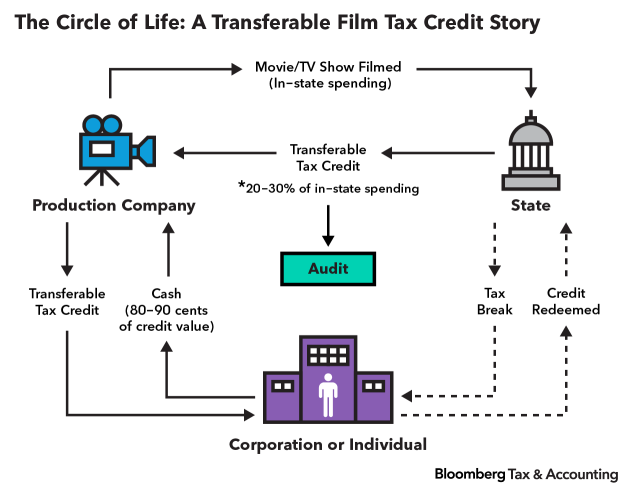 Because credits typically sell for 80 to 90 cents on the dollar, while the full amount of the credit can be claimed on returns, buyers can save millions on their state taxes. The production companies get cash to cover their costs, the credit brokers take commissions for arranging the liquidity, while states collect less revenue from some of their biggest taxpayers.

How much, even the states themselves aren’t quite sure.

Bloomberg Tax made public-records requests for film credit transfers in the 12 states where the practice is allowed. The only one to provide full records was Illinois. It has given $490.8 million in credits since 2010, making its program modest in comparison to the largest one: Georgia’s.

Nine of the 12 states denied the requests in their entirety, including Georgia, or didn’t respond.

Peter Hawley, director of the Illinois Film Office, said there is no concern that people who have nothing to do with a film are reducing their own taxes.

“That has not been an issue that has been raised to me,” he said.

One of the more frequent individual buyers of Illinois film credits over the past decade, according to those state records, has been Oprah Winfrey.

Almost all of the $6.8 million in credits that she purchased as an individual was given for production of pilots. Those shows, which often never make it to TV or theaters, can be difficult to finance, so Winfrey’s purchases provided cash for special effects, crew salary, licensing and other costs that the producers may have found difficult to find otherwise.

The records don’t specify how much buyers like Winfrey pay for the credits because the state doesn’t get that information. If her purchase price averaged 85 cents on the dollar, her credits on state taxes would have been about $1 million more than she paid, not counting fees.

In 2011, according to the records, the billionaire media mogul bought $1.3 million worth of credits from California-based Woodridge Productions Inc. that were originally awarded for its filming of A.T.F.—a made-for-TV movie that never made it to TV.

Based on the mystery novel “Kiss Her Goodbye,” A.T.F. starred comedian Michael Rapaport as a disgruntled federal agent who must do whatever it takes to save his daughter from a live burial—courtesy of a sadistic cult leader.

Woodridge sold all of the $12 million worth of Illinois credits it earned over five years, across seven different projects, to either Winfrey or Apple Inc., the state records show. Woodridge officials couldn’t be reached for comment.

No company has bought or sold more Illinois credits over the past decade than Comcast Corp., though virtually all of its $113 million in purchases were from its own subsidiaries. The biggest were awarded for production of the TV series “Chicago Fire.”

Officials at Comcast said the company uses the tax credits its subsidiaries earn in Illinois from film and television production and therefore they do not have to sell to third parties.

“What the state’s records reflect in our circumstances are credits being used within the same family of companies, not a sale,” a company official told Bloomberg Tax.

Those transfers involved $66.8 million worth of credits over a three-year period—incentives that Illinois Policy, a conservative think tank, pointed to as wasteful because the show would have had to film in Chicago anyway.

Comcast officials shared a report identifying $1.5 billion in economic activity resulting from NBC Chicago-based productions between 2014 and 2018. They declined to comment on any individual transactions.

Heinz Ketchup, which is headquartered in Chicago, also works on both sides of the program.

From 2017 to 2019 it sold more than $3.5 million of credits it got for commercial shoots to Macy’s, Apple, and Ozark Services Inc., an affiliate of auto-parts retailer O’Reilly’s Automotive Inc. It also bought more than $1.6 million in credits from projects including the History Channel’s “Gangland.” Heinz officials declined Bloomberg Tax’s request for comment.

Winfrey has also been both buyer and seller. Her Harpo Productions transferred more than $6.9 million in credits to Discovery Communications Holdings LLC in the years before Discovery became the majority stakeholder of OWN: The Oprah Winfrey Network in late 2017.

Chelsea Hettrick, vice president of OWN: The Oprah Winfrey Network and Harpo Productions, declined to comment on the transactions.

The biggest unaffiliated deal of the decade was Walmart’s 2018 purchase of a $14 million credit given for production of the second season of “Empire.” A spokesperson with Walmart called the purchase a “common marketplace transaction.”

US Bank National Assoc., which bought the credits for six full seasons of the courtroom reality show “Judge Mathis,” Kohl’s, and Bank of America were also among the top 10 buyers of Illinois film tax credits from 2010 to 2019, according to the state records.

Georgia gave $870 million worth of film tax credits in 2019, and has become the most popular place in the world to shoot a movie, according to a Los Angeles film office study. It’s also one of the states that allow credits to be transferred.

“In Georgia there’s so much production and so many tax credit certificates that have been issued that it’s forcing the price to go down that people are willing to pay for them,” Hadity said. “You are lucky if you get 85 cents on the dollar.”

State governments in general prefer tax incentives to cash assistance because the latter comes out of budgets, while the former is money the treasury won’t collect, Jensen said.

“Instead of putting money out, we’re taking away from money that’s going to be received,” Lederer said. “It’s a little more difficult for the state to actually send funds directly to a project.”

States including Georgia even have laws preventing them from paying companies directly.

“From an optics perspective, it looks like wealthy people are getting wealthier,” said Hawley, of the Illinois office.

Critics, though, argue that’s exactly the result in states that let the credits be transferred.

“I’m not surprised on the back end that there’s not a lot of due diligence,” said Jensen. “I don’t know if they want to know what’s going on.”

Some states have moved away from transferable credits.

Fourteen offer a grant or cash rebates for films. The finite nature of a grant caps the number of projects that can earn the incentive, as state funds are limited, but clearly documents who ultimately redeems them, unlike transferable credits.

New York makes its credits refundable, so a film company that doesn’t earn enough to owe state income taxes can cash their credit in for a check from the state.

“While the state is still losing money if you have a refundable tax credit, you see exactly how much money the state is losing for the year,” Kennesaw State’s Bradbury said.

Oklahoma once provided a tax credit for film production. It now offers a rebate, an approach Tava Sofsky, director of the Oklahoma Film and Music Office, calls “more straightforward” than credits.

A bill (H.B. 3921) currently pending in the state Senate would resurrect tax credits and make them transferable, while limiting the number of credits issued.

Sofsky said that would change things for her office, but added, “We’re definitely open to learning.”

A pending bill (H.B. 1037) in the Georgia House would impose mandatory audits, aligning Georgia with 30 states that require an audit before a tax credit is issued. But there have been few if any concerns raised about the transferability of credits.

“We’re not looking for any changes,” said Lee Thomas, deputy commissioner of the Georgia Film, Music & Digital Entertainment Office, “because it’s been great for us.”

To contact the reporter on this story: in Washington at smcquillan@bloombergtax.com