The rules California has used for a decade to funnel more than $7 billion a year in corporate income taxes into the state are at risk of being upended.

One Technologies LLC, a Texas company that sells consumer credit report service, is asking a California Courtto invalidate a 2012 ballot measure that established income tax rules for more than 100,000 corporations that sell goods or services in the state.

The challenge, which hinges on how parts of the measure were bundled together, would reduce state tax revenue, make California rules out of sync with most other states, and potentially jeopardize the legality of other tax measures. It also could put in-state companies at a disadvantage to out-of-state companies that could more easily cut their tax bills without locating offices or employees in the state.

“It’s the worst of both worlds from a tax perspective,” said Jared Walczak, vice president of state projects for the conservative Tax Foundation. “The state would lose revenue without creating a competitive advantage.”

“The result would not be what the anti-tax community wants it to be,” said Darien Shanske, professor at University of California, Davis School of Law.

Tax Board Asks for Dismissal

The California Franchise Tax Board is asking the court to dismiss the complaint, alleging One Technologies has failed to state a valid cause of action. A hearing is scheduled Dec. 8 in Los Angeles County Superior Court.

One Technologies is questioning the validity of Proposition 39, a measure approved by 61% of voters in November 2012 after investor and activist Tom Steyer contributed $29.5 million of the $32 million raised to campaign for it. Steyer and other supporters said it would close a loophole favoring out-of-state companies that don’t have employees or property in California but sell into California’s market.

The voter-approved approach requires multistate companies to calculate their taxable California income based solely on their sales in the state compared with sales elsewhere, an approach known as single-sales factor apportionment. Along with that, companies must assign income from sales of intangibles like services to the location of the customer, which is called market-based sourcing.

Twenty-seven of the 44 states with corporate income tax have similar apportionment rules—based solely on sales in their states compared with sales elsewhere. Most of the others use a three-factor system, but Walczak said they weight sales more heavily than the two other factors—property and payroll. 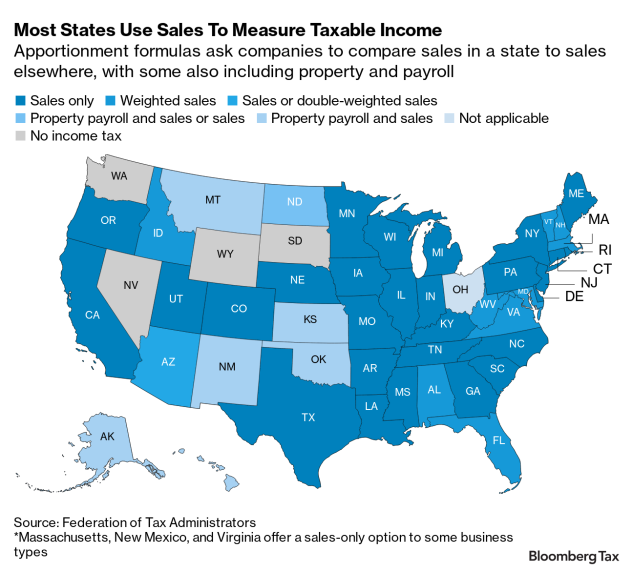 If One Technologies succeeds, companies could return to the pre-Prop 39 situation, picking the apportionment formula that cuts their taxes the most. Only Arizona and North Dakota offer such a broad option.

According to the tax board, 106,390 corporate taxpayers calculated their California income using the single-sales formula and paid about $7.2 billion in taxes in 2018, the most recent year with complete data. The FTB isn’t able to say how much revenue could be lost if the rules change because it’s unknown how many companies would choose the alternative formula.

Companies Had a Choice

Before 2013, companies could choose between the single-sales formula and the three-factor formula, which double-weights California sales. If they chose single-sales factor apportionment they used market-based sourcing. If they chose the three-factor formula, they assigned income from sales of intangibles to the location where the company incurred the costs to perform the services.

One Technologies wants to use the three-factor formula and cost of performance, which would keep more of its income in Texas, where its offices and employees are located.

If the court strikes down the law, California would revert to allowing companies to pick which formula would result in the lowest tax liability. And the state could owe refunds to companies that want to use the three-factor formula in past years for which the statute of limitations hasn’t expired.

Lawmakers could step in to re-enact the single-sales formula or craft a remedy to reduce the revenue loss, as they have when courts have invalidated other tax laws in the past.

Allowing companies to use cost of performance rules that go with the three-factor formula would put California companies that sell services or intangibles—especially those in the tech sector—at a disadvantage to out-of-state companies, Walzcak said. Companies based in other states, he added, would have an incentive to refuse to allow employees to work remotely in California because their presence in the state could increase tax liabilities.

At the heart of One Technology’s lawsuit is the claim that Proposition 39 violates the single-subject rule in the California Constitution.

Proposition 39 had two other elements along with the single-sales formula: It earmarked $550 million of the estimated $1 billion in annual revenue for five years to energy efficiency projects like retrofitting schools and government buildings, and it gave cable television companies a permanent carve-out, allowing them to assign half their sales of intangibles based on market rules and half based on cost of performance rules.

One Technologies alleges that those three elements aren’t sufficiently related to one another in two different ways. Either the single-sales factor rules are germane to the funding for clean energy jobs, leaving the cable tax carve-out unrelated; or single-sales factor and the cable carve-out are germane, leaving the clean energy jobs fund unrelated.

The complaint has merit, especially the argument that the cable company carve-out isn’t related to the measure’s purpose, Thomas W. Hiltachk, an election law attorney with Bell, McAndrews, and Hiltachk LLP, said in an email. Instead of generating revenue for the energy program, it reduced revenue. A 1999 California Supreme Court ruling invalidated a ballot measure because it did the opposite of its stated purpose.

“In other words, the proponent’s attempt to carve out the cable companies from the tax imposed on everyone else may come back to bite him in the rear,” Hiltachk said.

The tax board argued the opposite in its demurrer filing, saying courts have upheld much broader initiatives facing single-subject challenges. Ballot measures can have a common purpose without having provisions that interlock into a functional relationship, the agency said.

Shanske, from UC Davis, agreed with the tax board, saying California has special apportionment rules for many industries, and the cable carve-out is highly related to the body of the proposition. Plenty of other court rulings show the courts have a broad view of the single-subject rule, he said.

Other tax ballot measures could be vulnerable if One Technologies succeeds, because it would broaden interpretation of the rule even more, Shanske said. On the top of the list is Proposition 26, passed by voters in 2010, to reclassify many government fees, charges, levies, and allocations as taxes that require a two-thirds majority vote from lawmakers. The two-thirds vote is required if a bill increases taxes on even one person or business.

Shanske and a colleague, law professor Chris Elmendorf at UC Davis, argue Proposition 26 could violate the single-subject rule because proponents failed to mention the new supermajority vote requirements in ballot materials, and the rule was created to prevent voter “bamboozlement.”

A win in court for One Technologies would be a pyrrhic victory, considering the ripple effects on tax policy and ballot measure law, Shanske said.

“If you want to have friends at the Chamber of Commerce jamboree, it’s not good,” he said.