Governors from New York, New Jersey, Connecticut and Pennsylvania have in recent weeks banded together as part of a to coordinate reopening schools and businesses shuttered by the coronavirus outbreak.

But with states and cities facing the worst fiscal crisis in decades, a little-noticed provision in New York’s tax law could leave billions of dollars in tax revenue up for grabs -- putting those amicable relations to the test.

It’s spelled out in Section 132.18 (a) of the New York tax code. It says anyone who works out of an office in New York, but lives out of state -- whether in Westport, Connecticut, or Chatham, New Jersey -- must pay New York income tax. And the Empire State stands out in how strictly and aggressively it enforces the statute, even if your job is done predominately from home.

There is, however, one exception: when work from home is a “necessity,” which is exactly what’s happening now with states imposing shelter-in-place decrees everywhere.

The situation could set up a high-stakes money grab, according to tax lawyers who’ve reviewed the statute. Of course, out-of-staters have repeatedly tried their luck in court to get out of paying New York taxes -- and failed. And New York’s neighboring states are still playing nice. But that could change.

“States don’t have a good track record on coordinating tax policies,” said Jeffrey Friedman, a partner at law firm Eversheds Sutherland. “You could see two states claim withholding on the same income. Without state coordination, it will be a disaster.”

... However, any allowance claimed for days worked outside New York State must be based upon the performance of services which of necessity, as distinguished from convenience, obligate the employee to out-of-state duties in the service of his employer.

For starters, non-residents account for nearly a fifth of New York’s income tax revenue, according to the latest available figures. That works out to almost $700 million a month. Those are tax dollars the state, which has more Covid-19 cases than any other, desperately needs. Last week, Governor said New York is being hit by an “economic tsunami.” He has also said the state is “broke” and faces a $10 billion deficit. 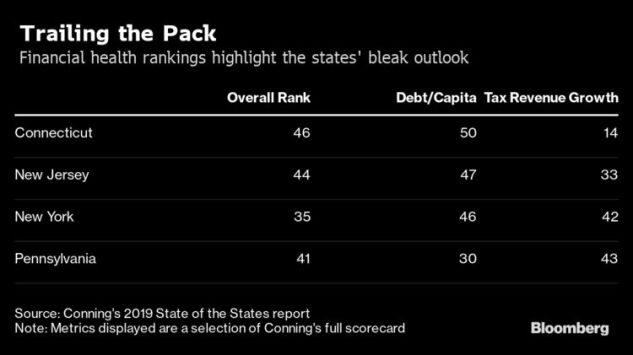 At the same time, the pandemic’s devastating economic toll could compel New York’s smaller neighbors, already beset by their own budget problems, to take action. New Jersey, with the second-most confirmed cases, has a rainy day fund of just 1% of budgeted spending. Pennsylvania has suffered some of the deepest job losses and is in the same boat. Connecticut had only 10 weeks left in reserves set aside for unemployment benefits as of April 9, according to the Tax Foundation, among the least in the U.S.

Using data from New York City’s Comptroller’s Office, a 2016 blog post by law firm Hodgson Russ also helps to illustrate the money at stake. It wrote that 43% of all U.S. taxpayers who made $10 million or more reported at least some income to New York in 2013. Above that income threshold, nearly two-thirds of New York state taxpayers filed as non-residents.

At the time, the average income for New Jersey, Pennsylvania and Connecticut non-resident New York taxpayers was $189,485, $225,921 and $432,196, respectively, the law firm said. The median household income for New York residents was $57,369, according to U.S. census figures. 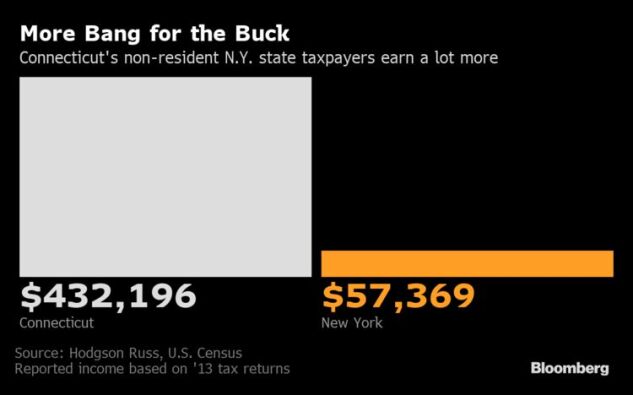 “There clearly is an issue here,” said Tom Corrie, a principal at Friedman LLP and director of the firm’s state and local tax group. “It is something I’ve been thinking about and I mentioned it to my colleagues on a Zoom call.”

So far, the states are being neighborly. New Jersey recently issued guidance saying it’s business as usual: taxes will continue to be due to the state where the income is sourced. Thomas Gohsler, chief counsel of the Pennsylvania Department of Revenue, said it isn’t considering claiming the tax dollars earmarked for out-of-state employers -- yet.

Connecticut is aware of the situation and currently evaluating its response, but no decisions have been made, according to Jim Polites, a spokesman for the Department of Revenue Services. The New York Department of Taxation and Finance didn’t respond to telephone calls or emails seeking comment.

Few will deny that New York, the region’s economic powerhouse, is fiercely protective of its tax base. The state, with the highest per-capita GDP of any state in the union, doesn’t have reciprocal tax agreements and is notorious among tax lawyers for chasing dollars it believes it’s owed. 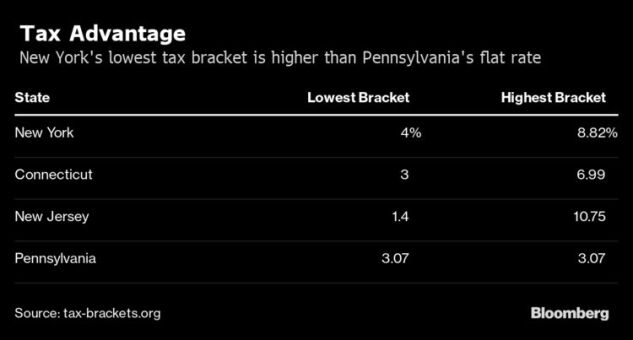 Not only is the tax imposed on those in the tri-state area, but even in far-flung places like Wyoming, where for example, a trader at a New York-based hedge fund might be able to work for the mountain vistas and the powder snow. That means you never have to set foot in New York to owe it taxes. Try to exclude even a portion of that income and expect an audit as a rule of thumb.

For workers, that tax bite (and conversely, the potential tax savings) could swing hundreds or even thousands of dollars into or out of one’s paycheck. Over the years, the necessity requirement has been challenged time and again in court. But according to tax experts, few employees have ever won.

“Folks should have a clear case for allocating their income during this time to their home state” because of government-ordered lockdowns, he said.

That doesn’t mean New York will make it any easier on out-of-state tax filers, says Matthew Rheingold, an attorney at Einhorn Barbarito. He points to New York’s response during Superstorm Sandy. The state gave people more time to file, but didn’t change rules for non-residents forced to work from home.

“Employees will have a stronger argument this time,” Rheingold said. “But absent a mandate from the state of New York, they’ll be required to at least pay and then can challenge the validity of the law.”

For companies, any change from the status quo could create headaches. A shift in an employee’s tax home could create a “nexus” -- a tax presence in a state which would require businesses to file additional corporate taxes.

Whatever the case, the coronavirus is likely to prompt states to rethink how they treat remote workers, says Richard D. Pomp, a law professor at the University of Connecticut. The last substantial change to New York’s guidance was in 2006.

“What this really illustrates is, when this is over, customs and traditions and mores will be changed,” he said. “This is a time bomb that predates Covid.”

As for the tax grab, Pomp made two points: First, it will be a hassle for New York to review every non-resident’s tax return to determine whether work outside the state was done out of necessity or convenience. Second, New York might seem a little tone-deaf if it actually goes after them.

“New York will appear so heartless and insensitive if they don’t give in on this,” he said.

To contact the reporter on this story:
in New York at bkochkodin@bloomberg.net

To contact the editors responsible for this story:
at papadopoulos@bloomberg.net