A scene from the Netflix show "Godless," among the film projects shot in New Mexico.
Photographer: Ursula Coyote/Netflix

Behind the desert battle scenes in “Transformers” and a superhero’s earthly adventures in “Thor” are New Mexico scenery and sets—and the local politicians who have for years wooed the film industry.

New Mexico since 2002 has used state rebates—now capped at $50 million a year—to attract television and movie production companies. And interest in filming there is rising with a recent $1 billion deal with Netflix to open a production hub in Albuquerque.

For some policymakers, that’s just the start.

State leaders, including new Democratic Gov. Michelle Lujan Grisham, want to eliminate the annual limit on the rebate, arguing the cap has stifled opportunities and left New Mexico saddled with hundreds of millions of dollars in unpaid obligations to film companies. New Mexico’s push to double down comes as other once Hollywood-hungry states such as Michigan and West Virginia have ended film incentive programs, citing minimal benefits. 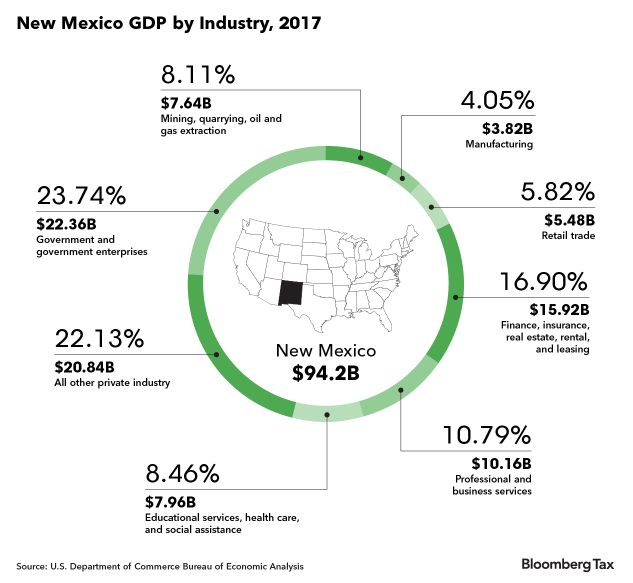 ‘Sky Is the Limit’

New Mexico sells itself on competitive incentives, a film workforce, and scenery ranging from western towns to salt flats. Productions like “Breaking Bad” and “Cowboys and Aliens” are part of its tourism identity.

The state’s popularity as a set, however, has led to a funding crisis. Stymied by the annual film credit cap introduced under the former Republican governor, the state has accumulated a roughly $300 million backlog of unpaid rebates that movie makers are waiting on. Lujan Grisham’s proposed budget this year would pay off that debt. Without a fix, the tab of unpaid credits could reach $700 million by the end of the 2023 fiscal year, legislative economists predicted in December.

New Mexico’s film production tax credit acts as a 25 percent to 30 percent rebate on various expenses, including payroll for New Mexico residents, local rentals, and location fees. There’s no limit on the number of companies that can apply for the credit each year, but claims are bumped into the future after the state reaches $50 million annually. 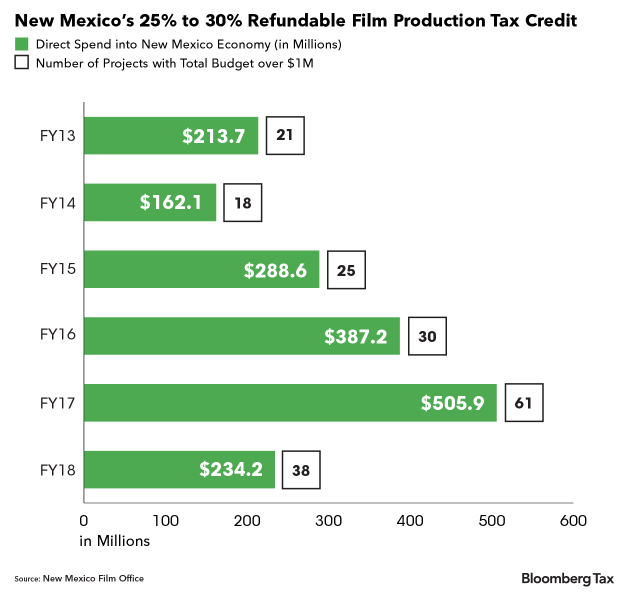 Lawmakers “realize something has to change” this year, said Rep. Antonio “Moe” Maestas (D), who is co-sponsoring a bill to eliminate the cap and make other changes to the film program. His legislation and a similar proposal in the Senate will surely pass in some form, he told Bloomberg Tax.

A separate bill Maestas is co-sponsoring would start a film set internship program to give residents the chance to work on the productions. One percent of a film company’s rebate would go toward funding it, under the proposal.

Economic development leaders want to attract more companies like Netflix, which announced a 10-year deal in October 2018 to open an Albuquerque production hub and potentially create thousands of film jobs in return for $14.5 million in state and local economic development funding as well as use of the rebate program. A company spokesman declined to answer questions from Bloomberg Tax.

“The sky is the limit when it comes to film in New Mexico,” Maestas said.

Good Use of Money?

Opponents of expanding the program say the glitz of drawing actors and directors to New Mexico doesn’t mean it’s good tax policy. Funding would be better spent elsewhere, they argue.

New Mexico’s film program amounts to giving Hollywood directors money “to come play with us,” Rep. Mark Moores (R) told Bloomberg Tax. From a budgeting standpoint, Moores is concerned about planning for the future if the state removes the rebate cap.

“It’s a straight cash payment back to an industry,” he said.

New Mexico should consider the goals of its program before expanding incentives, Patrick Button, assistant professor of economics at Tulane University and post-doctoral scholar at the RAND Corporation, told Bloomberg Tax. Button’s research evaluated the impacts of the incentives in New Mexico and Louisiana on creating a film industry in the regions from 2002 to 2008.

New Mexico-specific studies have cited a range of returns on investment from the program throughout the years. Button found no significant increase in employment, a high cost to create jobs, and minimal spillover effects on the rest of the state’s economy compared to a baseline example of not offering the incentives.

“It’s not a very good use of New Mexico taxpayer money,” Button said. 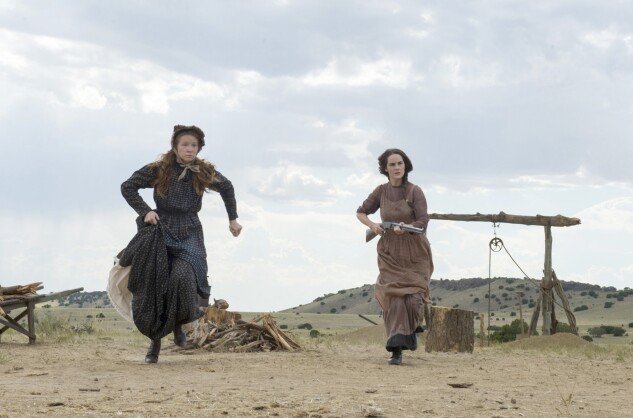 A scene from the Netflix show “Godless,” among the film projects shot in New Mexico.
Photographer: Ursula Coyote/Netflix

This plot line may sound familiar. Incentive-based aspirations have been tried in other movie-seeking states with varying outcomes.

Louisiana was the first to offer the incentives and caps them at $180 million a year. Georgia and the U.K. are among New Mexico’s biggest competitors, Eric Witt, executive director of the Santa Fe Film Office, told Bloomberg Tax.

New Mexico’s program is structured to benefit local workers and vendors, which can’t be said for every state, Witt said. Proposals under debate could reverse damage stemming from limiting and complicating the incentives in recent years, he said.

“We have a rare situation in that we’re getting a second chance,” Witt said.

Roughly a dozen states, though, have ended their programs over the last decade, according to the National Conference of State Legislatures. Studies on the economic benefits generally haven’t been favorable, Joseph Bishop-Henchman, executive vice president at the Tax Foundation, told Bloomberg Tax.

Among their conclusions are that states are paying more to film companies than they get back, Bishop-Henchman said. Additionally, the industry leaves as soon as it finds better incentives elsewhere, he said.

Still, Texas and Colorado are among states that, like New Mexico, are hearing pitches to boost their programs this year. Bishop-Henchman said he would dissuade New Mexico from expanding its program or encourage adding more requirements for elements like minimum spending and job creation.

“You’re putting a lot of money on the table,” he said.