Nevada is the latest state to exempt tampons and pads from sales tax, part of a nationwide push to address inequality in tax policy.

Voters approved a ballot initiative Nov. 6 to add feminine hygiene products to a list of medical and health products exempt from sales tax in Nevada, where products face a tax of up to 8.265 percent.

The exemption could cost the state between $6 million and $8.5 million in tax revenue a year, according to the Fiscal Analysis Division of the Nevada Legislative Counsel Bureau.

A total of 15 states, along with the District of Columbia, now don’t charge sales tax for feminine hygiene products: 10 states have adopted an exemption and five states don’t have a sales tax on anything. That number could soon grow: Wisconsin, Ohio, Nebraska, Arizona, and Virginia all have pending legislation to create a similar exemption.

“It’s more important to let women to save that money—even if it’s a small amount every month—than forcing them to pay more for something they medically need,” Sen. Yvanna Cancela (D) told Bloomberg Tax. “It creates equality in our tax structure.” 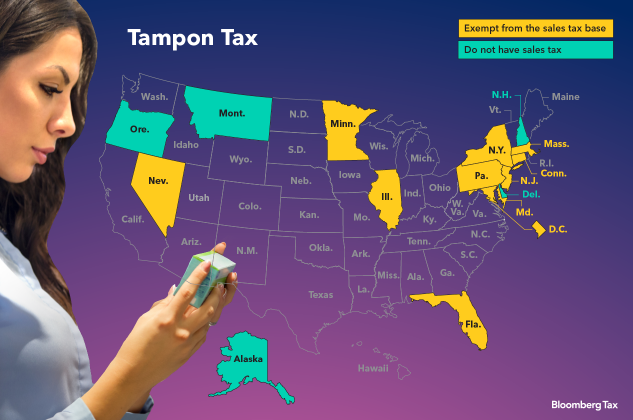 The Nevada ballot initiative originated as legislation, which passed unanimously in the Senate and 39-2 in the Assembly. Because of Nevada’s citizen-initiative process, statute affirmation, the bill couldn’t become law without a vote of the people.

While the initiative passed easily, it did have its opponents, who argued that it could lead to a substantial decrease in state revenue and lax fiscal policies.

“If we start exempting items, it opens Pandora’s Box,” Assemblyman Jim Marchant (R), one of the two Nevada lawmakers to vote against the exemption, told Bloomberg Tax. “Where do you stop? That’s the problem.”

Nevada ranks 10th in the U.S. for fiscal health, a better than average rating, said Eileen Norcross, vice president of policy research and senior research fellow at the Mercatus Center at George Mason University and lead author of Ranking the States’ Fiscal Condition.

Still, the exemption isn’t sound tax policy, because it differentiates between different types of products, Nicole Kaeding, director of federal projects at the Tax Foundation, told Bloomberg Tax in an email.

“The sales tax, in general, should be broad, taxing all final consumption,” Kaeding said.

But supporters of the initiative note that Viagra and dandruff shampoo are among the many items already exempt from sales tax.

Caroline Mello Roberson, state director for NARAL Pro-Choice Nevada, a nonprofit that supported the initiative, told Bloomberg Tax that the pink tax highlights a financial burden that falls on women and not men because women don’t have a choice in purchasing the items.

“This is an issue of systematic inequality,” she said.

To contact the reporter on this story: Emma Beyer in Washington at ebeyer@bloombergtax.com