When NFL Commissioner Roger Goodell announces the first pick in the league’s 2021 draft Thursday night, he’ll do live it from a stage overlooking Lake Erie with players and fans in attendance.

Another return to tradition: the host-city paid millions of dollars for the right to let one of the world’s most lucrative sports leagues showcase its future stars while pulling in the kind of TV viewership most actual sporting events can’t hope to muster.

But the $5.5 million in private and public dollars Cleveland is paying to host the National Football League’s premier off-season event was pledged at a pre-pandemic time when organizers projected more than $8 million in city and state tax revenue from the influx of visitors. Thursday’s watered-down event could have a fraction of the attendance from similar events years ago and will miss marquee names like Clemson’s Trevor Lawrence, expected to be the first overall pick to the Jacksonville Jaguars.

“The economic impact of most studies is zero, and you’re telling me the draft is going to bring in more money than the All-Star Game?” he said. “I can’t believe that.”

Still, American cities seem to think so. For the past six years they’ve competed for the right to host the event, offering up millions in taxpayer and privately funded “in-kind services” to the league free of charge, people involved with the process told Bloomberg Tax. These services could include anything from covered insurance policies to free event space, police and emergency medical services, and free concerts from huge headliners like Tim McGraw.

The three-day event televised on NFL Network, ABC, ESPN, and ESPN Deportes will showcase Cleveland landmarks like the Rock & Roll Hall of Fame, FirstEnergy Stadium, and the Great Lakes Science Center, allowing the city to highlight its best side while holding NFL fan engagement events.

Despite the pandemic, the event has been cleared by state and local health officials to allow up to 50,000 attendees a day, NFL spokesman Brian McCarthy confirmed April 26. The covered portion of the draft arena will hold 600 people, and a larger standing zone will hold 4,400. Close-in areas will be restricted to those with proof of vaccination against Covid-19.

But while dozens of prospective draftees routinely attend the event, the league said it expects only 13 top players to appear in Cleveland, including quarterbacks Zach Wilson from Brigham Young, Trey Lance from North Dakota State, and Mac Jones from Alabama.

Two other top tier quarterbacks—Lawrence from Clemson and Ohio State’s Justin Fields—are among 45 other players who have agreed to participate only remotely.

The traveling draft gives the league an off-season connection with college and pro football fans while coming to “incredible cities that might not host big NFL events or host Super Bowls,” said Peter O’Reilly, NFL executive vice president of club business & league events. He adds that changing host cities has “made the television broadcast that much more exciting.”

If last year’s draft TV ratings hold up, the round on Thursday night alone would roughly match viewership of the Grammys and Emmys combined.

“What we’ve seen is that turning it into a bigger free event across three days, and the fun spectacle that it is, is symbiotic in multiple ways,” said O’Reilly. 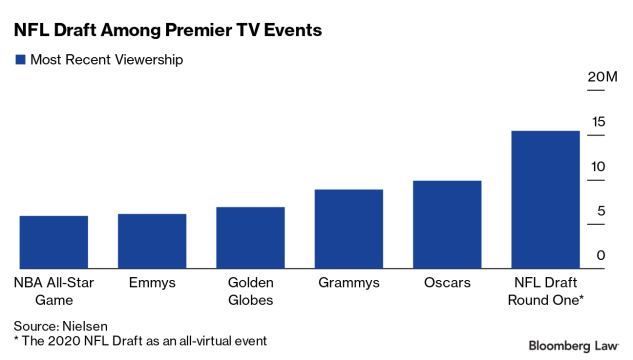 But $5.5 million could go a long way in Cleveland, where a public-private partnership this month announced a $650,000 grant to extend subsidized broadband to 2,000 families in East Cleveland, a poor majority-Black suburb.

“This is a large waste of money, money that could be used for other things for the city,” said Yvonka Hall, executive director of the Northeast Ohio Black Health Coalition, noting that that with $5.5 million the city could provide a paid summer-jobs program to every 14-to-24-year-old Cleveland resident.

“We have so many young people who will never be at the draft, never see the draft,” she said. “What is the benefit of that $5.5 million for the neighborhood.”

The NFL started its annual draft in 1936, but the traveling concept was born only a decade ago when a nervous Butch Spyridon approached Goodell at a party.

“I walked up to him, introduced myself, pointed at the [Nashville] mayor and said, ‘You should consider moving the draft. He’ll give you free police and free venues,’” said Spyridon, president and CEO of Nashville Convention and Visitors Corporation.

Spyridon’s shot in the dark hit the mark the next year, when Nashville held the event.

The NFL claims Nashville attracted 600,000 attendees—nearly the size of its population—over three days and hoovered in $132.8 million in direct spending for the region. The city also pulled through for the league, delivering about $3.5 million worth of free services including the production costs for concerts put on by country superstars Tim McGraw and Dierks Bentley.

The Nashville draft was broadcast in 23 countries, created aerial camera footage of packed crowds along city thoroughfares, and garnered over $100 million in spending, Spyridon said. “Any one of those things alone would have been enough for us to spend $3.5 million.”

This tradeoff is common in the tourism industry, where leagues and organizations often require local contributions for events. For instance, Ohio kicked in more than $10 million in contributions to the Republican National Committee to host the 2016 GOP convention in Cleveland, according to campaign finance disclosures.

A year before Nashville’s event the Cleveland Browns were vying to enter the NFL’s pipeline for either the 2020 or 2021 draft.

To “strengthen our bid,” a Browns executive said in 2018 legislative testimony, the state needed to expand a sales tax-based incentive for sports events and rejigger the law so that the expenditure could be used for the NFL draft. That bill (H.B. 531) received near unanimous passage.

Months later, after witnessing the record-setting 600,000 attendance in Nashville, tourism board Destination Cleveland submitted a state incentive application with estimates saying Cleveland and Canton (site of the NFL Hall of Fame about 60 miles away) would see 75,975 hotel rooms booked and roughly $80 million in direct spending from draft visitors, according to calculations obtained through public records requests. 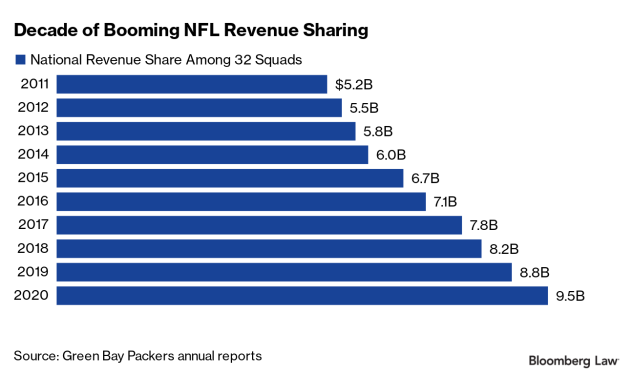 That incentive acted as a backstop and helped land the draft, “because we could say to the NFL, the state was also in, so it wasn’t just a pledge that we could raise money to cover obligations,” said David Gilbert, president and CEO of Destination Cleveland and the Greater Cleveland Sports Commission. “When they chose Cleveland, we already had a majority of the dollars raised, so I think it gave the NFL a lot of comfortability.”

Now pandemic restrictions will permit at most 150,000 people total into the three-day event. Gilbert, Kelley and O’Reilly all said only that they expected “tens of thousands” of visitor to Cleveland this weekend.

Even though the draft won’t draw crowds the organizers once expected, it could provide a crucial injection of tourism dollars into hotels and restaurants hurting from the pandemic, said Rob Higgins, executive director of the Tampa Bay Sports Commission, and organizer of this year’s Super Bowl—which was played with restrictions on fan numbers.

Hotel occupancy increased 77% over pandemic levels and hotel revenue increased by $21 million over that Super Bowl weekend, he said. “For us the timing couldn’t have been better.”

Marketing cities—a subset of “place branding"—continues to grow in popularity as regions try to emulate the success of the “What happens in Vegas, stays here” and “Pure Michigan” campaigns, said Stewart Colovin, head of branding at MMGY, which created Cleveland’s recent re-branding campaign.

Landing an event like the NFL draft is a big win for Cleveland because it feeds into the city’s attitude and brand, and, “if you can tell people who you are, what you stand for, and why they should be a part of it, it’s helpful,” said Colovin.

To get camera-ready for this week’s events, the city got a face-lift, spending $1 million of taxpayer money to knock down a lakefront warehouse to make room for the draft’s stage.

And it will get significant publicity during the televised event that will further the city’s reputation as a sports-tourism town, making it easier to attract other large events and visitors, Gilbert said.

“The typical Super Bowl ad is $3 million for what, 30 seconds? You’re talking about [roughly] double that amount of money, but for people to be talking about your city for a month, and certainly an awful lot over a three-day period,” said Mara Einstein, a former NBC and MTV executive and current media studies professor for Queens College. “As a sheer marketing buy it’s certainly worth it.”

The NFL won’t disclose what it’s spending on the draft, but O’Reilly said it’s in the “tens of millions of dollars.” The league’s 32 teams split nearly $9.5 billion in national revenue last year, according to a financial disclosure by the Green Bay Packers, the only publicly owned franchise.

While Kelley calls the Browns a “good community partner,” pro sports subsidies remain a touchy subject in Cleveland, where 26 years ago Browns owner Art Modell moved his team to Baltimore and renamed them the Ravens. Cleveland was later awarded a new NFL team that kept the Browns name and began play in 1999.

“It’s unfortunate that cities are competing against each other,” Kelley said. “But it’s the world that we live in, and we have competed and we won this one.”

To contact the reporter on this story: in Columbus, Ohio at aebert@bloomberglaw.com