Technology giants CDW Direct LLC and Oracle Corp. topped a list of nearly 200 businesses that forked over approximately $10 million to the city of Chicago to settle claims that they failed to pay the city’s one-of-a-kind cloud-computing tax.

CDW, a $16 billion hardware and software company, paid Chicago $1.45 million in 2017 in tax and interest under two previously confidential settlement agreements under the city’s Personal Property Lease Transaction Tax. The program was a way for Chicago to tax businesses for their use of remote computing services, like information from an out-of-state provider stored on the internet, or cloud, instead of on a computer hard drive.

Oracle, regarded as the third largest global software company by revenue, signed a check for $841,608 in 2016 to resolve a backlog of unpaid taxes and interest under the cloud tax. As part of the settlements, both companies agreed to collect Chicago’s tax going forward.

The settlements illustrate Chicago’s rising success with a novel tax program that has become a powerful source of revenue for the cash-strapped city. Chicago collected nearly $90 million in cloud taxes during first two and a half years the program. The city stands to collect millions more with the City Council scheduled to approve a budget item Nov. 26 boosting the cloud tax rate from 5.25% to 7.25% beginning in 2020. A spokeswoman for Chicago’s Finance Department said the 2% increase will scoop another $17.2 million into city coffers next year.

Chicago’s program also reflects a creative adaptation of the existing tax code to capture revenue from business applications of an emerging technology. Chicago may be the only jurisdiction in the country taxing the digital economy through its nonpossessory lease rules to tax the cloud.

The CDW and Oracle tax agreements and several other settlements came to light following a Freedom of Information Act request from Bloomberg Tax. The city initially declined to release the settlements under company claims of taxpayer confidentiality and assertions that disclosure “would cause competitive harm,” according to a letter from the city’s Law Department. The full settlement agreements were ultimately provided after Bloomberg Tax made an appeal to the Illinois Attorney General’s Public Access Counselor and then negotiated with the Law Department. 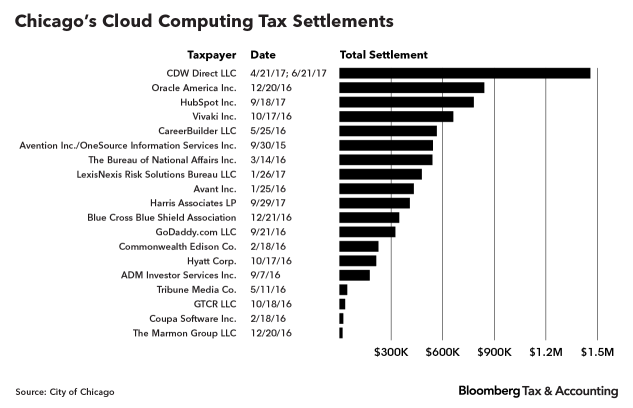 Four other firms were identified as settling. They were: Harris Associates LP, a Chicago investment company managing $118 billion in assets, which paid $408,029; Tribune Media Co., owner of the Chicago Tribune, which paid $44,041.The Marmon Group LLC, a Chicago industrial holding company, which paid $17,016; and Citrix Systems Inc., a Fort Lauderdale, Fla.-based software and cloud services company, which had outstanding cloud tax liabilities, but the dollar amounts are unclear from settlement documents.

CDW said it is not company policy to comment on tax matters, “beyond what is shared in our quarterly earnings calls or disclosed in our public, non-confidential filings.” Oracle did not respond to a request for comment.

The disclosures came two months after Bloomberg Tax published an expansive examination of Chicago’s cloud tax program, which began as a tax on nonpossessory computer leases in 1994. The program was modified in 2015 under Lease Transaction Tax Ruling #12 to capture a wider swath of cloud applications including Platform as a Service (PaaS), Infrastructure as a Service (IaaS), and Software as a Service (Saas).

“I think the understanding is pretty good at this point,” said Weston Hanscom, deputy corporation counsel for the Law Department. “We still get questions because it is a complicated area. You’ve got computer technology involved and you’ve got this technology applied to a huge array of businesses. So we still get questions, but I think people are understanding the legal principles that are applied.”