Skyscrapers on the Manhattan skyline in New York City. Plans have fizzled for a long-discussed makeover of the city's property tax system.
Photographer: Michael Nagle/Bloomberg

One of the first New York City public events shut down in the coronavirus emergency was an advisory panel’s opening hearing on long-awaited preliminary recommendations to reform the city’s property tax system.

Nearly five months later, a fiscal crisis from the pandemic’s economic impact has monopolized the attention of elected officials and further delayed the prospective property tax relief for low- and middle-income neighborhoods that the panel was assigned to explore. That means changes in the widely criticized system aren’t coming anytime soon.

The work of the New York City Advisory Commission on Property Tax Reform remains at a standstill, with the shutdown blocking its plan to gather feedback on findings issued at the end of January. And a legal challenge to the city’s property tax system is barely moving, as state courts slowly reopen.

With the city facing a drastic revenue shortfall, “most people are thinking about that, not long-term structural solutions to the problems with the property tax,” said Moses Gates, vice president for housing and neighborhood planning at the Regional Plan Association, an independent civic group. “The reforms the commission was considering are on a scale not seen since the last major changes made in 1982. Now the focus seems to have shifted to the bottom line of total revenue, rather than how the property tax burden is distributed among taxpayers.”

Market and budget volatility in the pandemic have shaken up the “intricate machine of many moving parts” that the city property tax system has become, Gates said. “The worst thing to do would be to make long-term adjustments based on this unique moment,” he suggested.

“The fiscal challenges now facing the city of how we’re going to get from where we are now back to a new normal are of necessity taking precedence, certainly for the foreseeable future,” added Mark Willis, a senior policy fellow at the New York University Furman Center for real estate and urban planning.

But Martha Stark, a former city finance commissioner, said that the city’s increasing reliance on the property tax for revenue makes it even more important to ensure that the system is fundamentally fair. “This is not the kind of system you want to depend on, and the city is going to need to depend on it,” she said.

Now property tax burdens are even harder to sustain for individuals and businesses that have lost income in the pandemic’s wake, which raises the urgency of making sure the system isn’t discriminatory, she said. Stark is the policy director of Tax Equity Now New York, known as TENNY, a coalition of real estate interests and civil rights groups that filed a still-pending legal challenge to the system in 2017.

At stake in the reform project is the structure of a system that, with nearly $31 billion a year in tax collections, makes up more than 40% of the city’s total revenue. The system has been widely criticized as opaque, confusing, and riddled with disparities that can result in owners of similar properties paying disproportionate taxes and different neighborhoods carrying uneven tax burdens.

Owners of luxury high-rise condos and brownstones in gentrifying areas have a lower effective tax rate—taxes paid as a percent of market value—than working-class people who have owned their homes for years, critics say.

The property tax’s share of the city’s total revenue stream is projected to rise to 50% over the next couple of years, as less money comes in from income tax, sales tax, and other levies more sensitive to the economic downturn, said George Sweeting, deputy director of the city Independent Budget Office, a fiscal watchdog agency. That might make officials reluctant to tinker with the property tax.

“Given the financial pressure the city is facing, I would expect people to be very cautious about anything that would affect revenue,” he said.

When Mayor Bill de Blasio and City Council Speaker Corey Johnson appointed the advisory panel in 2018, they called for its recommendations to be revenue-neutral—meaning that any tax cuts for some property owners would have to be offset by increases for others.

“Certainly, in a recession, it would be hard to measure over several years what revenue neutrality is,” Sweeting said. “It would be harder when you consider the potential variability of future real estate values. That would have been hard even before the pandemic.” 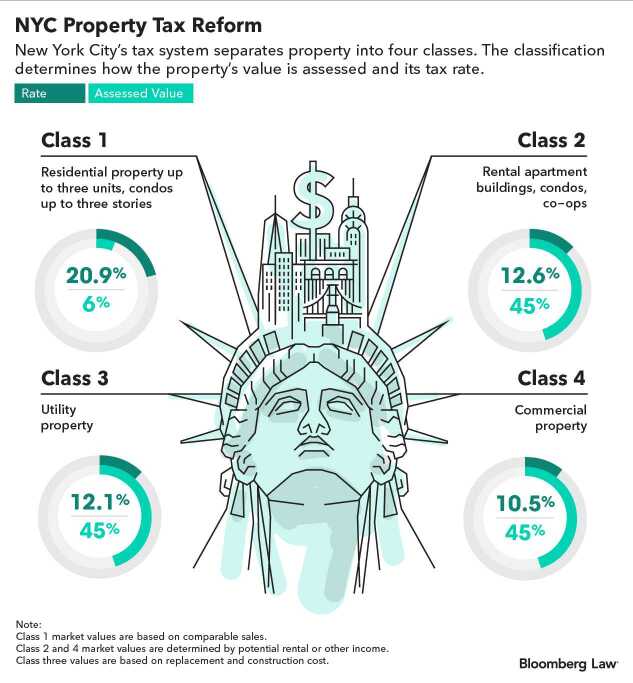 The plan for the advisory panel came in part as a response to the 2017 TENNY lawsuit, which alleged that the property tax system’s disparities have rendered it racially discriminatory and unconstitutional. But an intermediate-level state appeals court dismissed the suit in late February, and an appeal of that decision to the state’s highest court remains mired in shutdown-related litigation delays.

The group’s lawyers expect a ruling “at some point over the next few months” on whether that appeal can go forward, TENNY spokesman John Gallagher said. “Once that happens, we’ll be prepared to brief on the merits according to the schedule of the court,” he said.

The dismissal of the TENNY case tempered the momentum following the release of the advisory panel’s preliminary report, and any remaining momentum was then “effectively halted by the current pandemic and economic disruption,” said Ana Champeny, director of city studies at the Citizens Budget Commission, a business-friendly private think tank.

The postponement of the advisory panel’s hearings—and thus the end date for a final report—“leaves the process in limbo,” she said.

But property tax reform remains an important priority for the city, and the commission’s preliminary report “provides a solid foundation for that work,” Champeny said. Attempts at piecemeal change, rather than systemic reform, would run the risk of creating “an even less well-designed program,” she said.

Stark said she continues to believe that the courts are the best route “to achieve structural reforms that will be fair, legal, and constitutional,” adding: “I don’t have a lot of faith that the state legislature will take this up anytime soon.” Most city tax changes require state legislation.

With less than a year and a half left in de Blasio’s second and final term, “the clock is running out for this administration,” said Jeffrey Golkin, a veteran property tax attorney who runs the New York law firm Jeffrey Golkin Partners. He suggested that the advisory commission may end up like a similar panel in the early 1990s, which completed its final report at the very end of the administration of Mayor David Dinkins.

The 2021 race for mayor will provide a catalyst for restarting property tax reform, Golkin said, adding: “The candidate that puts forth a comprehensive and substantive plan will be the next mayor.” In the meantime, he said, declining city revenues will mean that the Finance Department will have even fewer resources to “properly value in excess of 1 million parcels each year.”

The impact of the pandemic has thrown commercial and residential real estate values into uncertainty, as “big open questions” loom about changes in market demand, Sweeting said.

“New York has revived from many downturns in the past, and maybe it will come back again,” he said. “As a New Yorker, I hope it does. It’s very early to tell, but all this uncertainty is going to make the city more cautious about changes in the property tax.”

To contact the reporter on this story: in New York at jherzfeld@bloomberglaw.com