More than half of all inquiries under a confidential tax guidance program in Chicago involve the city’s one-of-a-kind strategy for taxing cloud computing contracts, a public records search by Bloomberg Tax found.

Ten years of previously hidden tax rulings—often referred to as PLRs (private letter rulings) or GILs (general information letters)—show taxpayer confusion over Chicago’s tax programs for amusements, parking, leases, hotel rooms, restaurant bills, and real estate. But a majority of the letters focus on Chicago’s unusual push to tax businesses for their use of remote computing services, like information storage on the internet “cloud” instead of a computer hard drive.

The city’s reluctance to disclose the rulings has long been a source of contention. Most state and local jurisdictions across the country routinely make public such findings, which are valued by accountants and tax attorneys as guidance into how tax ordinances and regulations could affect specific businesses and industries.

Among the taxpayer queries: 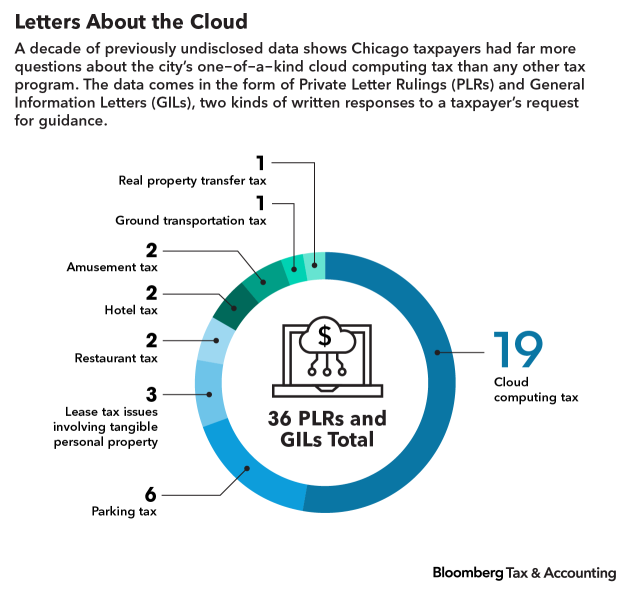 Hidden for a Decade

The private taxpayer letters remained hidden for a decade until Bloomberg Tax filed a request with the Chicago Department of Finance under the Freedom of Information Act. Chicago’s own 2004 regulation specifies the public must have access to the rulings, stating the documents “will be open to the public, except for the name of the taxpayer or tax collector and other confidential facts.”

“It’s totally unfair to taxpayers,” said Richard Pomp, a law professor specializing in state and local tax issues at the University of Connecticut School of Law. “There ought to be uniformity in the administration of tax laws. There shouldn’t be secret deals being cut. Everyone should know the position of the tax department on a particular issue. There is no excuse for Chicago not publishing these letters.”

“Historically, it has been very difficult to gain access to Chicago GILs or PLRs, which results in a lack of transparency for taxpayers trying to comply with city ordinances. In contrast, the Illinois Department of Revenue publishes these rulings and there is no reason for the city not to follow that same practice,” said Samantha Breslow, chair of the Chicago Bar Association’s state and local tax committee.

The Internal Revenue Service and many state revenue agencies routinely release and publish their PLRs. Some large cities, including New York, operate similar ruling programs and release the letters for public review.

Chicago’s chief tax counsel Weston Hanscom attributed 15 years of disclosure failures to resource constraints, saying his department would have to redact confidential facts about taxpayers before a public release.

“My main concern has just been about having the resources to do all the redacting that is needed,” he said.

Stanley R. Kaminski, a tax partner with Duane Morris LLP and a former tax counsel for Chicago, objected,saying redaction, “isn’t a laborious process, they just don’t want to do it.”

“This is a way for the taxing authority, regardless of the level, to communicate their policy and their interpretation of the laws,” Susko said. “So when a private letter ruling goes out, it might be only precedential for the taxpayer that requested it, but tax practitioners read these things like tea leaves.”

While Chicago has provided opinion letters to taxpayers for many years, the city formalized the letter ruling program in 2004 under Uniform Revenue Procedures Ruling #3. The regulation laid out a framework for taxpayers to query the department and receive a letter responsive to their tax situation.

PLRs issued in response to such queries constitute the official position of the department, Hanscom said. The taxpayer is entitled to rely on the letter in determinations of tax liability and as a defensive tool during an audit.

The regulation grants the department authority to issue GILs, typically in situations where a taxpayer has failed to provide enough relevant facts. GILs state general information about the tax code. Taxpayers cannot rely on such letters for tax determinations and defensive purposes.

Within the PLRs and GILs obtained by Bloomberg Tax, Chicago’s unique strategy for taxing the digital economy elicited the most controversy. Out of 36 letters, 19 involved cloud tax issues. Chicago is one of the few jurisdictions to tax cloud computing services and is regarded as the only jurisdiction doing so through a lease tax—the Personal Property Lease Transaction Tax.

While Chicago’s lease tax historically captured transactions involving automobiles, copiers, and other items of tangible personal property, the city has said since 1974 that the tax applies to leased computing time. Chicago confronted cloud computing aggressively with the publication of Ruling #12 on June 9, 2015. Less than six months later, the City Council amended the lease tax ordinance and the department released superseding guidance.

The letters reveal much of the confusion over the cloud tax came after the 2015 guidance. Taxpayers peppered the city with questions about the taxability of their particular computing services or their qualification for an exemption.

Here are all the recently released private letter rulings and general information letters.