Most states treat dried cranberries as taxable candy, but that could change as a governing board for streamline sales tax states tries to do something about it.
Photo by Matthew Healey/Bloomberg via Getty Images

A hurtful epithet frequently hurled at the dried cranberry may soon be lifted by state tax agencies just in time for the holiday season.

We’re talking about the word candy—a term that in some jurisdictions transforms the dried cranberry from a tax-free, vitamin-packed superfood into a taxable high-calorie, no-nutrition belly bomb.

The legacy of discrimination oppressing the long-suffering cranberry has finally caught the attention of the state of Wisconsin, home to nearly two-thirds of the nation’s annual cranberry harvest, and the Streamlined Sales and Use Tax Agreement, a pact establishing sales tax administration rules across 24 states.

Wisconsin’s Department of Revenue and the sales tax pact plan to modify their definitions of candy to exclude dried cranberries, leaving them free from the state’s 5% general sales tax rules reserved for Halloween favorites such as chocolate bars, gummy worms, and jelly beans.

“Cranberries are compatible to raisins and other dried fruits,” said Tom Lochner, executive director of the Wisconsin State Cranberry Growers Association. “It’s always been a thorn in the side of growers, but now we’re working with revenue secretary Peter Barca and his people to move it forward.” 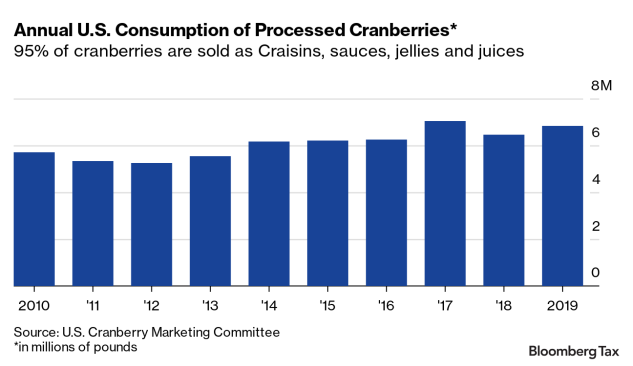 So what is the deal with dried cranberries, or Craisins, the trademarked snack marketed by the growers’ cooperative .?

Turns out dried cranberries suffer from a problem raisins, apricots, apples, and dates have never encountered. Dehydrated cranberries are just too darn tart for most folks. Food companies solve this problem by infusing the fruit with sweeteners.

This feat of food engineering came into full view in 2009 in an advisory opinion addressing Craisins by the New York Department of Taxation. Ocean Spray described a process by which cranberries are sliced and juice is partially extracted from the hull. The product is then soaked in a bath of blueberry, grape or pomegranate juices, sugar and citric acid. The fruit is then drained and dried before packaging for consumers.

That solution of sugar and juices penalizes the dried cranberry in the eyes of most revenue agencies, said Scott Peterson, vice president of U.S. tax policy and government relations at the sales tax software company Avalara Inc.

“The minute you put sugar on those cranberries, you make it candy in a bunch of states,” said Peterson, who helped draft the streamlined pact’s definition of candy.

“There are fruits that are naturally sweet and no sweetener of any form is added. The problem with a cranberry is it’s basically inedible without a sweetener,” he said.

Of the 45 sales tax states, 29 and the District of Columbia impose sales tax on candy. The remainder include candy in their definition of tax-exempt groceries, said Katherine Loughead, a senior policy analyst at the Tax Foundation.

The solution, Lochner said, is to redefine candy with an exclusion for dried cranberries in the states that don’t treat candy as a tax-exempt grocery item. Lochner began that process with Wisconsin’s revenue agency. The department then directed the growers group to request a uniform definition across the streamlined states.

The governing board of the streamlined states took up the question on Oct. 15 and debated a candy definition permitting member states to exclude any “preparation that only contains dried or partially dried fruit and one or more sweeteners.” The group is scheduled to review a final draft of the definition during its December board meeting.

Peterson noted New York created a precedent in its 2009 advisory opinion. The tax department agreed the process of infusing naturally tart cranberries with a sweetener was distinct from coating the fruit with chocolate or some other sweet substance, and found “Craisins are not a candy or confectionery subject to sales tax.”

Still, it’s unclear retailers and tax policy purists will rush to the defense of the dried cranberry.

During the Oct. 15 streamlined meeting Fred Nicely, senior counsel for the business-aligned Council on State Taxation, expressed reservations about a special rule for dried cranberries, warning “you are adding some complexity to the agreement.”

“The streamlined sales tax system is there for simplicity sake and that makes it easier for retailers to comply with all sales tax laws across all the states,” she said. “But we’re seeing how this debate over this definition is adding some complexity.”