Travel and tourism—which funnels $83 billion in tax revenue annually to state and local governments—is in a freefall triggered by the coronavirus pandemic.

The related havoc being wrought on state budgets is widespread: less bed taxes from hotels; less sales tax from restaurants and retailers; less rental car taxes and the list goes on. Even one of the newest funding sources for states—taxing sports betting—is caught in the mix with the abrupt end of many live sporting events.

Tourism-dependent states are seeing the largest immediate declines in economic output, with Nevada and Florida hit the hardest, according to Karl Kuykendall, a US regional economist at IHS Markit, a London-based business research firm.

Taxes from travel and tourism contributed to roughly 6% of total state and local tax collections across the U.S. in 2018 according to U.S. Travel Association and U.S. Census Bureau data compiled by Bloomberg Tax.

While it is not clear at this early stage what services state and local governments would have to cut to make up the shortfall, the biggest expenditures annually go toward education, public welfare, which includes Medicaid spending, and hospitals and health care according to the Urban Institute. Nevada and Florida’s tourism-specific taxes on things like gaming and hotel beds go toward education and infrastructure funding, respectively.

The timing of the tourism spending drought is particularly harsh since springtime is usually a peak period for hotels, casinos, and related industries.

“Overall, it’s a dire picture for state and local government budgets and economies,"said Lucy Dadayan, a senior research associate at the Urban-Brookings Tax Policy Center. A shutdown of tourism for just one month translates into millions of revenue lost in some states, she said.

Over 3 million Americans working in hotels or with jobs supported by hotels are projected to lose their jobs in the coming weeks, according to an American Hotel & Lodging Association report. That’s roughly 44% of hotel employees in every state. Many top industry hotels have withdrawn their full year financial outlooks.

“State and local tax revenues from hotels, transportation, restaurants, and bars will be in [the] red in the month of March and most likely beyond as we are still not seeing [a] flattening of [the] COVID-19 curve,” Dadayan said.

Over 47 million Americans were expected to legally wager a combined $8.5 billion on this year’s now-canceled March Madness, NCAA championship basketball tournament, according to data compiled from the American Gaming Association.

“It’s not just college basketball, there’s no sports in general,” Casey Clark, senior vice president of communications at the American Gaming Association told Bloomberg Tax. “There’s no sports to bet on, or sports to go watch at a sports book, or at a property.”

Currently legal in 14 states, regulated sports betting has generated over $152 million in tax revenuesince a landmark 2018 Supreme Court decision to lift a prohibition outside of Nevada on sports gambling. Illinois, Michigan and Indiana, are among the eight states that opted to regulate the industry in 2019—and are expected to tax sports betting in 2020.

For the first time ever, all of the country’s 465 commercial casinos are closed down, as well as most tribal casinos, an industry that generates $41 billion annually in tax revenue across the United States, according to the American Gaming Association.

“For lottery revenue the biggest thing is education,” said Brian Sigritz, director of state fiscal studies at the National Association of State Budget Officers. “Closures of casinos contribute to a small portion of the overall revenue, but you know, even that small portion can be significant.”

The hotel-casino industry contributed $1.4 billion of tax revenue in Nevada in 2018—roughly 40% of receipts according to the Nevada Resorts Association. One month’s share comes to about $121 million.

Nevada Gov. Steve Sisolak (D) announced April 1 that his stay at home order extends to closures of non-essential businesses, including casinos, with a tentative April 30 end date. As of Friday, governors in 38 other states and Washington D.C. had put in place stay-at-home orders, some lasting as long as June 10. 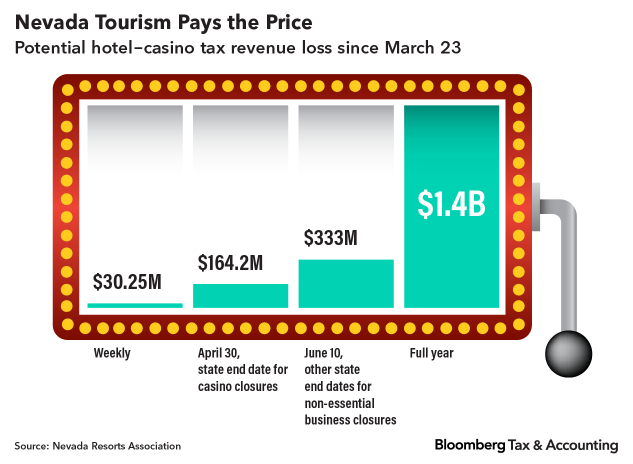 Nevada could be hit the hardest, as it has the highest concentration of jobs supported directly by leisure and hospitality, said Dayadan.

The state’s employment rate is expected to fall 30% in the second quarter, according to Kuykendall of IHS Markit.

“Everyone’s kind of reeling from this unprecedented mass closures of our properties,” Clark of the American Gaming Association said. “But it’s not just affecting the properties—it’s the rest of the hospitality industry. This is having a remarkable impact across the board, and it’s completely unprecedented.”

Hotel rooms in Las Vegas generally include a Clark County room tax between 10% and 13% depending on the location of the establishment. The bulk of that revenue (39%) goes toward funding education at the state and local level, which Nevada spent over $3 billion on last year, making it the second-highest spending item for 14 years straight. Thirty-five percent of that share goes toward promoting tourism.

Sisolak put a hiring freeze in place on state government to prepare for a state budget shortfall, a spokesperson with the Governor’s Office of Economic Development, told Bloomberg Tax.

“We’re a major contributor, we contribute billions a year in tax and tribal revenue share payments to state and local governments,” said Clark. “When our businesses are shuttered, it has a ripple effect into state economies that are going to have, are going to continue to have, a hard time to fund critical services.”

Home to several of America’s most popular beaches and vacation spots, Florida generated $14.4 billion in taxes from tourism in 2018, according to the USTA.

The coronaviurs outbreak just happened to spike during the state’s peak vacation season, as Gov. Rick DeSantis (R) ordered a two-week suspension of vacation rentals in the state on March 27.

Florida, one of seven states with no income tax, relies heavily on sales taxes generated from visitors. Revenue collected from in-state transactions in Florida account for 83.8% of all of the state’s tax collections, compared to the 47.7% national average according to Florida Taxwatch, a nonpartisan, nonprofit government watchdog and taxpayer research institute.

On top of its 6% sales tax, Florida also imposes the Tourist Development Tax for rentals of six months or less. The so-called “bed tax” ranges from 2% to 6%, depending on the county. and generated over $1 billion last year according to data complied by the Tax Policy Center.

That revenue goes toward construction of tourism-related facilities, tourism promotion and beach/shoreline maintenance.

“I think we’re going to see a decrease in the ability of folks to to go on on vacation and engage in tourism, either because they’ve had an employment disruption—which we’ve seen already happening—or they’ve already used some of their income or savings that they may have used,” said Angela Fontes, director of Behavioral and Economic Analysis and Decision-Making at NORC at the University of Chicago, an independent research institution.

It’s not just America’s traditional vacation spots feeling the pain. Hotels around the country count on March and April for some of their year’s largest profit margins.

Idaho, for instance, feeds off hospitality revenue as its third-largest industry, according to Carrie Westergard, executive director of the Boise Convention & Visitors Bureau.

Cancellations of major local events like the Big Sky Conference basketball championship tournament are already having an impact on the industry. The conference’s President’s Council voted to cancel the remainder of the tourney March, 12, a day before the women’s championship game, just as the men’s quarterfinal games were slated to tip off.

“It was vibrant downtown, you know with tournament comes fans,” said John Cunningham, president and CEO of Block 22 LLC, an ownership group that manages three hotels and a sports arena in Boise. “The next day the conference tournaments started canceling. Almost overnight, the situation just changed.”

Our hotels went from record occupancy and record daily rats to historic lows in just a matter of weeks, Cunnigham said.

Last year Boise hotels brought in $10 million during the week-long NCAA basketball tournament, and Idaho—over $500,000 in state and local taxes, Westergard told Bloomberg Tax. Hotel revenue from this year’s tournament will likely “be half or less because the men’s brings in more people—and that’s the part that really got canceled,” Westergard said.

Cunningham said his ownership group had to lay off over 500 employees, retaining only 50. Cunningham’s management group shut down two of its three hotels.

“We had to funnel the guests we do have into one property to be more efficient,” he said.

Before the pandemic Boise hotels were running close to 14% profit margins—a number that quickly shrunk to zero, according to the Visitors Bureau.

“They’ve done a lot of furloughs and layoffs, probably about 75% of the workforce in the hotel industry,” Westergrad said. “There are some properties that have closed down or are being limited to one or two floors. From what I’m hearing some have zero guests, some have a handful.”

While Boise’s local hotels hope to rebound sooner rather than later, fallout from the coronavirus continues to push back more major events and peak times for tourism.

The Treefort Music Fest usually takes place at the end of March. It comes right on the heels of the also-canceled annual South by Southwest Festival in Austin Texas.It’s one of Idaho’s highest-grossing tourism events every year.

“It was by no means an easy decision, but we recognize the far-reaching impact of our festival and our top priority is and always will be community,"Lori Shandro, festival producer and co-founder said in a press release.

Every five years Boise hosts an international festival in conjunction with its sister city in Spain, Jaialdi. It draws thousands of visitors from all over the globe. While the event doesn’t keep track of visitors, it’s estimated that 2015’s Jaialdi festival brought in anywhere from 30,000 to 40,000 visitors.

Slated for late July, the Jaialdi isn’t canceled or postponed yet, although the future is uncertain.

“I’m confident it’ll return in all of its former glory,” Cunningham said although his management group is taking measures to prepare should Jaialdi be rescheduled.