Ontario, California, has paid $28 million in sales-tax collections to seven major companies and their consultants since 2013.
Bloomberg Tax/Jonathan Hurtarte

The city of Ontario, Calif., has paid more than $28 million out of its sales-tax collections to selected companies and their consultants since 2013 while telling local property owners it needs to raise their taxes to finance city services.

The payments to companies including Staples Inc., Cardinal Health Inc. and QVC Inc. were made under an incentive program that would be banned for future use under state legislation awaiting Gov. Gavin Newsom’s signature.

Ontario has been among the most active cities in California embracing the incentive program, funneling more than $1 million a year to a handful of companies that have located warehouses or sales offices around the city’s airport, a Bloomberg Tax analysis found. Companies in the program treat all of their sales made in California as though they were made in Ontario, regardless of the customer’s location, so the entire 1 percentage point local share of the state sales tax collected on those purchases goes to Ontario.

The companies’ shares of the tax collections under the deals reached a high of nearly $9 million in 2016 and totaled more than $6 million in 2018, city records show.

Companies that have struck tax-sharing pacts with California cities, such as Apple and Best Buy, have defended the arrangements for bringing jobs and strengthening ties to communities where they do business. Many communities that have embraced the programs have been hungry for economic growth. Others see flaws.

“I can’t see a scenario in which this is even remotely justified,” said Nathaniel Cline, an associate professor of economics at the University of Redlands, 30 miles east of Ontario in California’s Inland Empire. “I don’t see [the payments] as making a difference for the region’s economy and workers.”

Cline studies tax incentives and their impact on the regional economy, including an examination of Ontario’s deal with QVC.

The sales-tax breaks are being given to certain companies even as Ontario seeks to raise taxes for other businesses in the city. Three proposals before the city council in August alone—to impose special property tax assessments in its historic but derelict downtown, in a new housing development, and in a vast new warehouse facility—would raise $1.6 million a year to fund services and improvements. All three passed at the council’s Aug. 20 meeting.

“Why would they be giving money to these companies if they are taxing others in a blighted area?” asked Michael Coleman, a consultant to the California League of Cities and founder of the Local Government Finance Almanac. “You have to ask whether they really need to do that.”

The league lobbies on behalf of municipalities statewide, and adopted a policy in February opposing such deals because they shift sales-tax revenue away from multiple cities for the benefit of one.

Bloomberg Tax tallied Ontario’s payments to the companies by combing through more than 11,000 pages of check registers approved by the Ontario City Council between January 2014 and June 2019. The city provided the registers in response to a request under the California Public Records Act, after denying requests for information about payments to specific companies and consultants who broker the deals.

City officials indicated on four occasions since late August that they were reviewing Bloomberg Tax’s questions but have not provided any details nor given any statements beyond an initial response when first asked about the deals in March.

“We’re competing with other states in the western United States for these facilities,” John Andrews, Ontario’s economic development director, told Bloomberg Tax at the time. Council policy calls for the city to work within the law to use mechanisms like the agreements to attract them, he said.

Ontario, 40 miles east of downtown Los Angeles on Interstate 10, stands out among the estimated 10% of California’s 482 cities that have tax-sharing agreements. The city has 10 of them posted on its website, to comply with a 2015 state law requiring cities to disclose them. Dozens of other cities examined by Bloomberg Tax have only a few, if any.

With highways and rail lines leading directly from the ports of Los Angeles and Long Beach that connect to national transportation networks, Ontario is “the epicenter of Pacific Rim imports” said Greg LeRoy, executive director of Good Jobs First, a think tank that tracks tax subsidies. Any serious supplier will have a warehouse in California, and Ontario is a logical place to have one, he said.

“It makes no sense to subsidize warehouses there, period, let alone in this way,” LeRoy said. 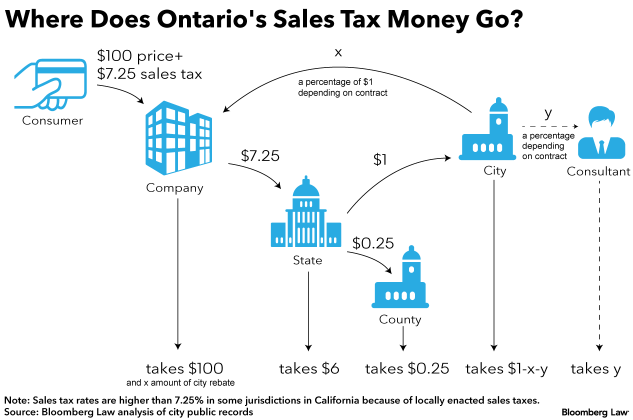 Ontario and other cities have used the agreements as a tool to attract warehouses and online sales centers, though some deals are with companies that are already located in the cities and don’t have to do more than stay put.

In tax-sharing deals, the cities typically give about half of their 1 percentage point increment back to the companies—often for decades, the contracts show.

Newsom, a Democrat, could put a damper on the program. Lawmakers sent two bills to his desk in September that would either ban future deals or impose more disclosure requirements on them. Newsom hasn’t taken a position and has until Oct. 13 to sign or veto the bills. 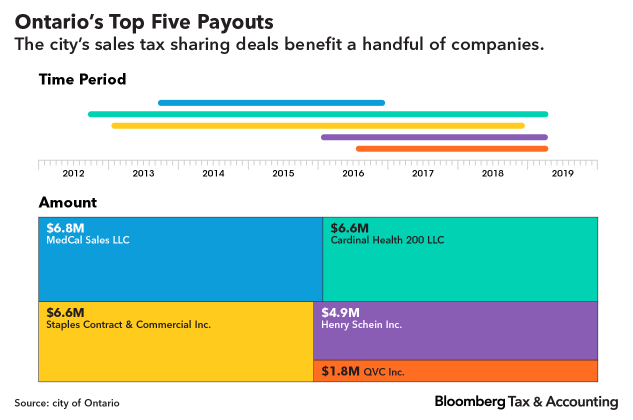 MedCal Sales LLC, a subsidiary of Medline Industries Inc., received the most among Ontario recipients: $6.8 million in tax incentive payments from October 2013 through December 2016. The agreement isn’t currently posted on the city’s website, and Ontario officials wouldn’t say if it is still in place. A Medline spokesman declined to comment.

Cardinal Health received $6.6 million from October 2012 through March 2019 under an agreement that was updated in 2018 and gives the medical supply company 50% of the city’s sales tax share from Cardinal’s sales.

Staples Contract & Commercial Inc. has received $6.6 million for its agreement in place since at least 2013 that designates the company’s Ontario warehouse as the California point of sale. Staples will continue to receive payments for at least 15 years, or until the city stops receiving sales tax revenue from its Ontario location, according to the contract.

None of the companies other than Cardinal Health responded to requests for comment.

In addition to paying the companies, Ontario has also been giving 5% of the taxes it collects on sales by QVC and Henry Schein to a consultant who brokered the deals for those companies.

City check registers show lawyer Robert E. Cendejas and two corporations in which his relatives are listed as principals have received $483,078 in payments related to Henry Schein, and $154,608 for QVC. Cendejas and the other companies will receive payments until at least 2036 under the Henry Schein deal and until 2057 for QVC, according to his contracts with the city

Cendejas, separately, has performed legal services for the city that include representing it at meetings of the state Board of Equalization. The city paid Cendejas $138,509 in legal and consulting fees from July 2015 to January 2018, according to the check registers.

Cendejas’s work for cities and for companies negotiating with them has been scrutinized before. California’s ethics watchdog, the California Fair Political Practices Commission, in 2015 advised the city of Long Beach not to enter into a tax-sharing deal involving Cendejas, based on the city’s description of the deal in which he offered to bring an unnamed company’s sales operation there in exchange for 20% of the tax proceeds for up to 40 years.

The commission noted that Cendejas’ legal work for the city had included helping to develop Long Beach’s policies on tax-sharing deals. Negotiating a deal with Cendejas would allow the lawyer to “personally benefit from the very policy he assisted the city in developing and for which he has provided advice,” making it a potential violation of state law, the commission said in its advice letter. Long Beach didn’t enter into the agreement Cendejas proposed.

Cendejas didn’t respond to requests from Bloomberg Tax for comment about the payments from Ontario. Bloomberg Tax asked him in August and September to confirm the amounts found in the city’s check registries, what legal and consulting services he provided to Ontario separate from the tax sharing deals, and whether he served similar roles in Ontario as he did in Long Beach. He declined to comment when Bloomberg Tax first contacted him in April to discuss his work with Ontario and other cities.

Ontario is one of at least three cities where Cendejas has received ongoing payments that are projected to reach into the millions for tax deals he brokered.

“Incentives are not supposed to create lifetime income streams for the consultant,” he said.