California lawmakers will reconvene in May with a tighter agenda as they try to push measures that can help the state recover from the pandemic’s economic fallout. Above, the California State Capitol building stands in Sacramento.
Photographer: Patrick T. Fallon/Bloomberg

California lawmakers are facing a narrow agenda with fewer opportunities to change tax policy, including a closely-watched whistleblower law and a soda tax, when they return from a seven-week break due to the coronavirus pandemic.

When the 80-member Assembly returns Monday and the 40-member Senate returns May 11, they’ll likely drop many of the 2,000-plus bills pending before them. Instead, the short-term focus will be enacting a placeholder state budget in time for the start of the new fiscal year July 1 and moving on a shorter list of bills that focus on the state’s response to the virus and economic recovery.

The truncated schedule means the meatiest debates will be pushed into the summer months—after the economic impact of the delayed July 15 state income tax filing deadline and stay-at-home orders are clearer. Tax policy changes that are part of the budget package, known as trailer bills, and the handful of tax policy bills that survive outside the budget process will bubble up then.

“Put simply, any bills that reduce general fund revenue will be scrutinized and most will not be heard this year,” Assembly Revenue and Taxation Committee Chair Autumn Burke (D) said in an email. The crisis is forcing Burke to drop her usual approach to hear every bill assigned to the committee. “This decision was not made lightly; it was made to reflect the reality we currently find ourselves in,” she said.

Lawmakers will work under strict physical distancing rules, with some lawmakers participating remotely and few members of the public or media in attendance at committee hearings. Lawmakers will have few, if any, full floor sessions before June.

Gov. Gavin Newsom (D) has said new ideas he included in his budget proposal in January are up in the air because of the pandemic. He will release a revised budget plan by May 14, but that won’t be based on a complete picture of the state’s fiscal health because of the delayed tax filing deadline. Hearings on spending plans for the state’s tax agencies have been postponed for now.

The budget to be enacted by July 1 will likely continue the state’s current spending plans with minor, required adjustments. Lawmakers are planning for a second budget discussion in August.

In doubt are Newsom’s January proposals to:

Outside the budget process, lawmakers are pushing ahead with several tax bills that they see as tools to help California recover from the pandemic’s economic fallout. Most of the bills have been proposed but not enacted in previous years. 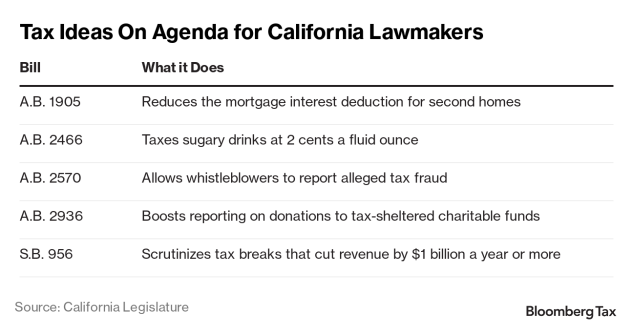 Nonprofit organizations serving communities during the pandemic need the boost that money held in donor advised funds can provide, Assemblywoman Buffy Wicks (D) said. Her bill would require more disclosures about the funds, which hold money already taken out of the tax base.

When the summer debates arrive, it could be time to consider major changes such as reducing the research and development credit or expanding the tax base to include intangible goods such as streaming services, said Samantha Corbin, legislative advocate for the California Tax Reform Association. The group represents labor, public health, education, and public interest organizations.

Because California’s budget relies most heavily on capital gains tax, personal income tax, and sales and use tax on tangible goods not including food, the pandemic-induced economic downturn will hit the state hard, she said.

Business groups are concerned that tax increases could be coming.

“We won’t have as many bills to deal with, but we’ll have a second budget, with trailer bills and maybe tax increases,” said Chris Micheli, a lobbyist who represents business clients including the Computer Technology Industry Association and American Investment Council.

Proponents of opportunity zones are continuing to push for state-level tax breaks to match federal benefits for investing in the zones and deferring capital gains, arguing investments would flow to communities hardest hit by the pandemic’s economic downturn.

(Updates to add party affiliation for Autumn Burke in fourth paragraph and status of spending hearings in sixth paragraph. A previous update corrected the date of the state Senate's return.)