Years of negotiations have produced an agreement to overhaul the global tax system in ways that will change where and how some of the world’s largest companies are taxed. Getting almost 140 nations on board was a huge breakthrough, but the fight isn’t over.

1. What are the highlights of the deal?

For the first time, there would be a minimum corporate tax rate applied , set at 15%, so companies have less incentive to move their operations to low-tax jurisdictions. The profits of about 100 of the biggest multinational corporations would be sliced differently for taxation purposes, so that more countries share in the tax revenue. And there would be a rollback of the so-called digital service taxes that the U.S. has deemed discriminatory, plus an end to new ones.

The Group of 20 nations -- which represent about 90% of the global economy -- finalized key details in October. So far, 136 countries have signed on, out of 140 countries involved in negotiations overseen by the Organization for Economic Cooperation and Development, with Kenya, Nigeria, Pakistan, and Sri Lanka holding out. Crucially, those now on board include and Hungary, which until now have benefited from having some of the lowest corporate tax rates in Europe. Another European holdout, Estonia, has also signed on. 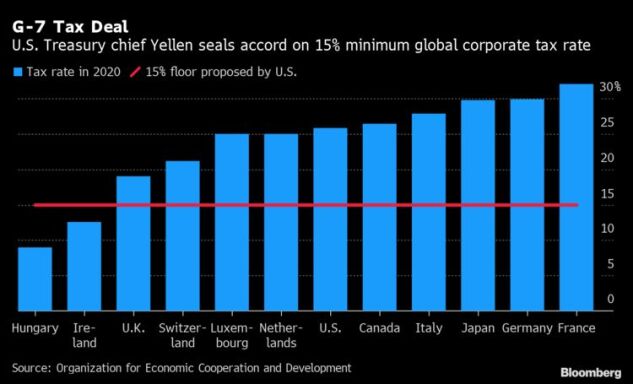 3. How would the global minimum tax work?

Countries would apply the minimum tax to nearly any multinational company making more than 750 million euros ($870 million), though some kinds of income will be exempt from that calculation. Primarily, the rules will allow a country where a company is headquartered -- call it Country A -- to “top up” its taxation of the company if it’s paying less than 15% in Country B. For example, if the company is effectively paying a 12.5% tax in Country B, Country A can collect the extra 2.5%. There is also a backstop in the rules for when countries don’t apply the minimum tax.

4. How would the tax reallocation work?

It would affect multinationals that make more than 20 billion euros a year in revenue and have a profit margin above 10%, exempting companies in financial services and extractive industries such as mining. They won’t necessarily pay more tax; rather, the taxes they pay would be divided among more places. This change will target about 100 of the world’s largest and most successful multinationals, including companies such as Amazon, Facebook and Google that can sell their digital products into countries without establishing the physical presence that creates the basis for corporate income tax. Under the new system, countries where those companies have consumers or users would get the right to tax 25% of profits exceeding a 10% margin -- and companies would be compensated for the tax they’re paying in additional locations by the countries where they’re currently paying it. Critically, countries also agreed to immediately halt all new measures. The freeze will last until the end of 2023, or whenever a convention implementing the reallocation goes into effect. Countries will also have to give up existing digital taxes.

5. Why is a resolution on digital taxes so important?

Seeing an end to digital taxes has been a key aim throughout the negotiations for the U.S., which labels the measures as discriminatory against its own companies. Some nations have imposed these taxes on local sales of companies such as Facebook, Amazon and Google -- grabbing a bigger share of the pie. France led the way with a tax on tech giants’ revenues, and other countries have followed. The U.S. now has retaliatory trade measures against Austria, India, Italy, Spain, Turkey, and the U.K. that are on pause until an end-of-November deadline. The OECD has warned that a cascade of trade retaliations could bite into a full 1% of world gross domestic product.

6. What’s wrong with the current system?

U.S. Treasury Secretary said the goal of the proposed global minimum rate is to end a “30-year race to the bottom on corporate tax rates.” The “legal and not-so-legal” use of tax havens costs governments $500 billion to $600 billion in lost corporate tax revenue each year, according to estimates cited by the International Monetary Fund. Some governments have also argued that tech giants aren’t being properly taxed in countries where they have users. And many countries, particularly in the developing world, say the current system of global tax rules and agreements concentrates corporate profits in richer countries, giving developing countries too small a slice of the pie.

The settled most of the major political battles, but technical details remain to be solved -- including clarification on determining which countries will give up the revenues that are reallocated. In the meantime, implementation moves ahead on two tracks. Adopting the global minimum tax is a country-by-country decision. The European Union will look to pass a directive requiring all 27 member states to pass legislation enacting it. To implement the new way to distribute taxes paid by multinationals, the OECD will produce a kind of super-treaty for countries to sign and ratify. At what point the treaty would take effect is still to be decided. A big question is what the U.S. will do, and ratification by the U.S. Congress could be a do-or-die issue for the treaty.

Yellen, who played a major role in brokering the global deal, must sell Congress on legislative changes to the U.S.’s own global minimum tax in line with the new rules. Lawmakers may also have to sign off on the global reallocation plan -- possibly through changes to tax treaties, which go through the Senate, though there’s been hints that Treasury may look for an alternate route. Many Republicans they’re unlikely to go along.

To contact the reporter on this story:
in Arlington at igottlieb1@bloomberg.net

To contact the editors responsible for this story:
at lharrison@bloomberg.net