Contractors work on a portion of Highway 101 under construction in Petaluma, Calif., on March 22, 2021.
Photographer: David Paul Morris/Bloomberg

The infrastructure agreement announced Thursday by the White House and a bipartisan group of senators carves out $579 billion of common ground from the $2.25 trillion American Jobs Plan unveiled in March by President .

While the latest deal falls far short of what the White House and progressives want to see in a broader economic agenda, most of the remaining priorities -- including spending related to the environment, child care and elder care -- may move through Congress in the legislative vehicle of budget reconciliation. That will let Democrats bypass Republican support, assuming the party remains unified in its thin majorities.

Here are key takeaways from the accord:

Traditional infrastructure is a big winner

Roads and bridges were big winners in the package, consistent with the Republican insistence on “traditional infrastructure.” That roadwork, along with other “major projects,” account for $109 billion of the $579 billion.

Other brick-and-mortar projects were also well represented: $49 billion for public transit, $66 billion for Amtrak as well as commuter and freight railways, $25 billion for airports and $55 billion for water infrastructure.

, president of the AFL-CIO’s Transportation Trades Department, said in a statement the proposed infrastructure deal “looks like a significant step forward in meeting the long-neglected needs of our nation’s infrastructure and the working families who rely on it.” 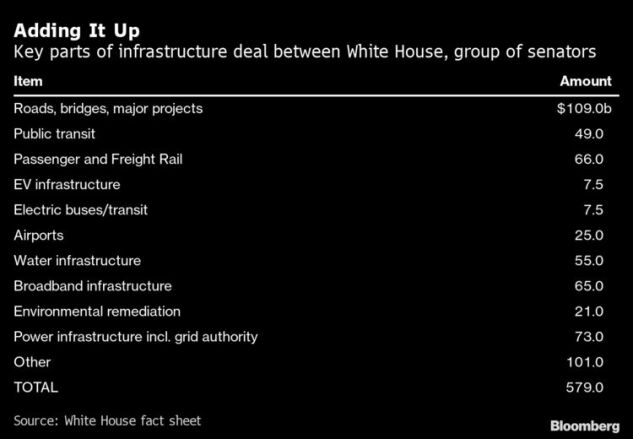 Plan is light on climate spending, but more may be coming

The bipartisan deal is light on climate measures the White House had called for, drawing the ire of green groups, but proponents may get a second chance through the so-called budget reconciliation procedure that Democratic congressional leaders have vowed.

The framework announced Thursday doesn’t include a mandate sought by the White House that could have required utilities to produce power only from carbon free sources. The measure, known as a Clean Energy Standard, was seen as one of the key ways to achieve the lofty climate goals announced by the White House this spring to reduce U.S. greenhouse gas emissions by as much as 52% by 2030. 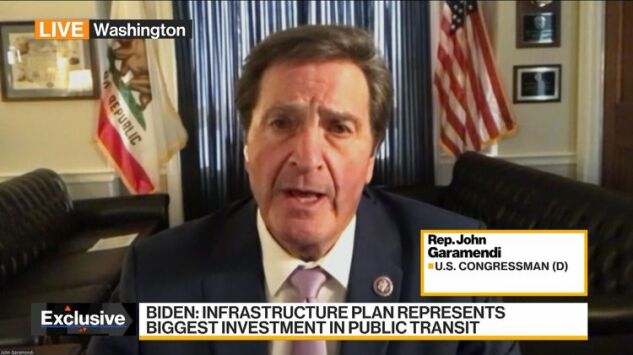 The deal also leaves out the White House’s call for $174 billion for electric vehicle initiatives, a 10-year extension of coveted tax credits for the wind, solar and other renewable sources, among other measures Biden said were needed to catalyze investments in a clean energy economy and encourage low-emission technology necessary to constrain global warming when he announced his $2.25 trillion infrastructure plan in the spring.

Tougher elements to be worked out in reconciliation

Biden made clear his support for the physical infrastructure package is contingent on Congress also passing companion legislation with funding for other key priorities included in his American Jobs Plan and the $1.8 trillion American Families Plan -- particularly those known as “soft” or “human” infrastructure.

Those proposals include $400 billion for care for older people and people with disabilities; $225 billion to help low-income families pay for child care; a $225 billion national paid family and medical leave program; free universal pre-school for 3- and 4-year-olds, as well as free tuition for community college; and expansions or extensions of various tax credits for families and low-income households.

Environmentalists assailed the dearth of climate investments in the infrastructure package, saying their absence underscored the need for the reconciliation package.

“There can be no bipartisan agreement signed into law without a companion reconciliation package rooted in the climate, jobs and justice vision of the American Jobs and American Families plans,” said , executive director of the Sierra Club.

Biden gets two-thirds, for some things

Biden said the infrastructure deal got “two thirds of the resources that I proposed in my American Jobs Plan” for the following areas:

For rail service, Biden said the $66 billion in the agreed framework compares with $90 billion that he had asked for. Electric buses got $7.5 billion of the $15 billion he had requested, with similar numbers for electric-charging infrastructure, according to Biden. He also highlighted some $49 billion for public transit. The administration’s original proposal was over an eight-year period, but the bipartisan deal is over five years, making direct comparisons difficult.

Biden got most of what he wanted on broadband, with the deal proposing $65 billion compared with $100 billion he sought earlier. While details of proposed expenditures weren’t immediately clear, the sum approaches some estimates of costs for connecting households. Biden had been seeking $100 billion in spending on the nation’s electric transmission systems, so the $73 billion pledged for it is a little less than three-quarters of what he wanted.

The White House said the legislation would also finance the largest investment in public transit in U.S. history, the elimination of lead service lines in the nation’s water systems.

No tax increases, though questions about numbers adding up

Thursday’s agreement lists a hodgepodge of sources for funding the infrastructure spending while steering clear of raising taxes -- something Republicans made clear was a red line. They range from repurposing other pandemic relief funds to investing in tougher Internal Revenue Service tax collection and selling oil from the Strategic Petroleum Reserve.

The plan avoids an increase in the 18.4-cents-per-gallon federal gas tax that infrastructure supporters have sought to provide a dedicated funding source for long-range construction projects.

Biden’s proposals to raise taxes on corporations and high-earning Americans remain firmly on the table, however. The administration is likely counting on most of its suite of tax proposals ending up in the reconciliation legislation, providing financing for the trillions in social spending that the bill is expected to include.

To contact Bloomberg News staff for this story:
in Washington at slanman@bloomberg.net