The boom in services delivering pizza, chicken wings and Kung Pao beef to millions sheltering at home during the Covid-19 pandemic is prompting a closer look into whether they’re properly collecting and remitting state and local taxes.

Internet- and app-based platforms such as DoorDash, Grubhub, Postmates, Seamless and Uber Eats were already on tax administrators’ radar, but the pandemic has heightened such concerns. Now, one lawmaker in New York is demanding that the state’s Department of Taxation and Finance audit the companies. The action comes as New York City and other municipalities pass ordinances capping the commissions and fees charged by food delivery companies.

The tax issues could be consequential in cash-starved states as the industry surges. Monthly sales volume for meal delivery services nearly doubled in April on a year-over-year basis, the data research firm Second Measure reported. The investment bank UBS estimates the global online food ordering industry could grow more than tenfold over the next 12 years to $365 billion by 2030 from $35 billion in 2018.

“The larger food delivery services are going to get audited—if they haven’t been already—in pretty much every jurisdiction because they’re big enough,” said Michael Feiszli, a managing director in the state and local tax practice of BDO LLP. “They are obviously one of the businesses thriving during this pandemic and that will make them a target in most jurisdictions over the next three or four years.” 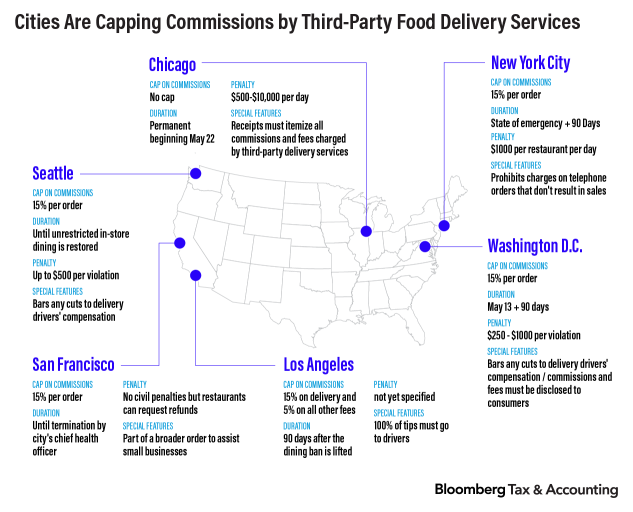 A key question confronting revenue agencies is whether the e-commerce companies properly collect tax on marketing, delivery and processing fees, which total roughly 30% of each food order.Chief Executive Officer Matt Maloney, for example, has contended for years that his company has collected taxes on delivery fees in response to audits in multiple jurisdictions, while some competitors haven’t.

The conflict is just the latest example of the tax uncertainty that emerges when a tech business model is laid over a mature industry, often triggering audits, litigation and eventually legislation. In this regard, Grubhub, DoorDash and Uber Eats face the same compliance gauntlet Expedia.com and Hotels.com encountered a decade ago with local lodging taxes, and Amazon.com and Wayfair encountered in the last five years with state sales and use taxes applied to e-commerce transactions.

Reacting to the size of food-delivery commissions and fees that shave already thin profit margins for restaurants, lawmakers in Chicago, Los Angeles, New York, San Francisco, Seattle and Washington D.C. have all imposed emergency rules in the last month capping commissions at 15%.

Grubhub and DoorDash may also contest ordinances that modify their business relationships with local restaurants. Grubhub spokeswoman Amy Healy lambasted Chicago’s disclosure rule and a separate proposal to cap commissions, calling the actions regulatory overstep that “will not withstand a legal challenge.”

At the heart of the tax compliance and profiteering complaints is the complex cocktail of commissions and fees charged by the food delivery services.

For instance, Grubhub charges partnering restaurants a 20% marketing commission, a 10% delivery commission, a phone order commission and an order processing fee. In an example on the company’s website, a customer placed a $41 order for Mexican food and Grubhub withheld $13.95 from the restaurant in commissions and fees, or 34% of the food charges. The customer likely paid another 20% to 30% after sales taxes, delivery charges and tips were added.

Compliance is a Significant Challenge

The tax laws that apply to those charges are just as complex.

Alex Thacher, a state and local tax partner in the San Jose office of the tax consulting firm Armanino, said the same food delivery transaction could be taxed a dozen different ways depending on the jurisdiction.

Levies on food and beverages are among the most complex to administer across the states. Rules regarding the application of taxes to delivery fees also vary widely with some jurisdictions such as Illinois requiring a rigorous analysis of the way the charges are stated on the invoice.

“It’s a very complicated facts-and-circumstances analysis. It really depends on things like: Is it hot food or cold food? Is it prepared to-go, or not? Who’s the seller? What jurisdiction are you looking at? What’s the agreement between the parties? How is it presented on the invoice?” Thacher said. “There are a myriad of questions and none are easy to answer.”

For example, delivery companies operating in Pennsylvania “should be collecting sales tax on the entire purchase price, which includes the cost of food, delivery and service fees,” said revenue department spokesman Jeffrey Johnson.

Marketplace laws, Thacher said, generally require online platforms to collect and remit taxes on behalf of their third-party sellers. Some states have characterized services such as Grubhub and DoorDash as marketplace facilitators with tax collection duties, while others have exempted them. For instance, Uber Eats determined it is required to collect tax in 31 states. A half-dozen states including California, Illinois and Utah generally don’t impose marketplace duties on food delivery companies.

“Sales tax is going to be an area of focus for audits,” Thacher said. “If you are a company engaging in activities subjecting you to have to collect and remit, I would certainly advise to you get in compliance.”

DoorDash is frequently singled out as a service that fails to collect taxes on delivery fees. A comparison of DoorDash bills circulated by industry sources suggests the company doesn’t tax those fees in California, Connecticut, Michigan, New Jersey, New York and Texas.

DoorDash spokeswoman Liz Jarvis-Shean conceded the company doesn’t collect taxes on delivery in some jurisdictions because it doesn’t consider itself to be a food reseller. Tax compliance, however, is a top priority.

“There are some markets in which we do not assess sales tax on deliveries or service fees to customers,” Jarvis-Shean said. “But we work with regulators to understand what the obligations are.”

Grubhub said it prides itself on tax compliance, “collecting and remitting tax on all transactions, including delivery fees, service fees and any other fees,” said company spokeswoman Katie Norris.

New York State Sen. Brad Hoylman (D) recently called for audits by the Department of Taxation and Finance. In a letter to the department in January, Hoylman said, “it is unconscionable that some of these companies—many of which are backed by billions of dollars in venture capital investments—may be failing to collect and remit basic sales tax.” The department didn’t respond to Bloomberg Tax’s request for comment on its audit practices.

If states decline to audit third-party delivery services, plaintiffs’ attorneys might file failure-to-collect actions on behalf of local units of government or false claims act suits on behalf of states, said Richard Pomp, a law professor specializing in state and local tax issues at the University of Connecticut School of Law.

“We might well see the class action lawyers swoop in and argue that taxes that should be collected are not, just like we saw with the online hotels,” Pomp said. “The laws need to be clarified immediately. There is a potpie of money waiting to be collected.”