First-quarter bank earnings were going to be rough enough without the coronavirus pandemic.

Implementing a new accounting rule on Jan. 1 that required them to estimate and record loan losses before they happen, the nation’s four largest banks added $10.4 billion to their reserves. Then came the spikes in unemployment and shuttering of much of the economy, raising doubts about whether customers could keep up with their credit cards and mortgages.

By the time the banks reported last week, they had piled on another $17.9 billion in loan-loss reserves in addition to initial adjustments for the current expected credit losses (CECL) standard—a figure that served mostly to raise questions from analysts whether even that staggering total was enough.

“The only thing we can say with any certainty is the loss estimates in first quarter are going to be wrong,” said Michael Shepherd, director at Fitch Ratings Inc.. 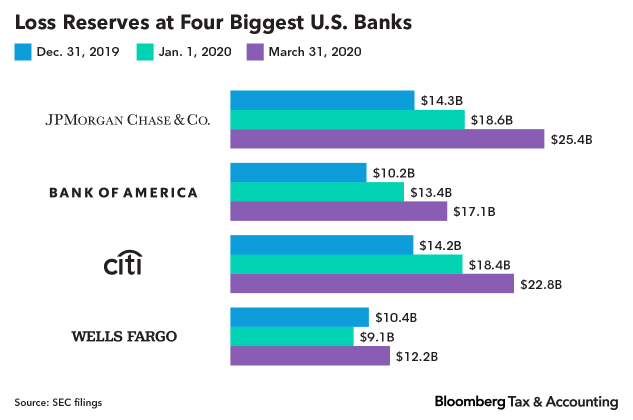 The economic forecasts underwent huge shifts just between March 31, when banks closed their books, and the beginning of earnings season in mid-April, said Ross Eaton, partner at Oliver Wyman.

“If you think about the way in which economic forecasts have evolved, as recently as early March, we were talking about a slowdown. Then it was a mild recession. Then it was deeper recession,” Eaton said. “Now you have numbers floating around like annualized GDP growth of minus 35%.”

Congress had offered banks an extension on complying with the accounting rule in the coronavirus relief package President Donald Trump signed into law March 27. But the details of the delay and regulator interpretations of it made it unpalatable for most banks. JPMorgan Chase & Co., Citigroup Inc., Bank of America Corp., and Wells Fargo & Co. all implemented it on time.

An accounting change, even one as major as CECL, doesn’t change the underlying economics of a loan. A bad loan will make a bank lose money under the new accounting as much as it did under the old accounting rules.

The difference is the timing of when a bank recognizes the losses. CECL moves the timing to the day the bank makes a loan, even before a customer makes a late payment. The mechanics of the accounting means that when a bank shores up its loss reserves, it dings its earnings.

Developed in the aftermath of the 2008 financial crisis, when bank balance sheets looked healthy despite the market meltdown, the idea behind CECL is to highlight potential credit losses and make banks prepare for them before it’s too late. The Financial Accounting Standards Board published the rule in 2016 and large, publicly traded companies had to comply with it on Jan. 1. Credit unions, privately held banks, and smaller public banks and companies have until 2023 to follow it.

“The adverse effect filters through the financials much more quickly,” said Saul Martinez, managing director at UBS. “And that’s a harder thing to gauge and estimate on a quarterly basis.”

The standard applies to all businesses, but banks and companies with big financing arms are the most affected. The rule requires businesses to look to the “reasonable and supportable” future, consider past experience, and assess existing conditions to come up with their best estimates on credit losses and set aside corresponding reserves.

“We haven’t actually seen the stress emerge as of yet,” Jennifer Piepszak, chief financial officer at JPMorgan Chase & Co., said on the bank’s April 14 call.

There’s no formula or standard method for any company to estimate and record losses. FASB intentionally created the standard to be flexible, within reason. But that means every bank draws up different estimates based on its customer, loan, and business makeup—and its vision for how the future will shake out.

“All of the banks will be using different assumptions in coming up with what their provision expenses will be so you can’t compare JPMorgan’s provision with Bank of America’s provision and take them as apples to apples,” Fitch’s Shepherd said. “That’s a challenge for us analysts.”

Within the more than $28 billion in total anticipated losses set aside by JPMorgan Chase, Citigroup, Bank of America and Wells Fargo, JPMorgan boosted its reserves by $6.8 billion, the most out of the group, and Wells Fargo upped its reserves by about $3.1 billion, the least of the four megabanks. If a bank has a lot of credit card customers, like JPMorgan, it expects more losses than one with a big book of commercial loans that have a history of paying on time.

Macroeconomic forecasts banks use play a central role, too. The models each use could differ significantly, especially for how they forecast labor and GDP changes.

“How do I tease out the differences between Wells and Citi and JPMorgan?” Martinez asked. “It’s hard because the disclosures aren’t consistent.”

To understand the reserve build up, analysts peppered bank executives with questions about their calculations.

“What we’d like to understand is what the major drivers are,” said Betsy Graseck, managing director at Morgan Stanley. “What is your outlook for GDP and unemployment over the reasonable and supportable period and over the rest of the life-of-loan period?”

In addition to the doom and gloom from a spiraling economy, banks also have to consider potential bright spots ahead. One of them is the stimulus check payout built into the relief package. Many Americans received money the same week that bank earnings kicked off.

“Will they use any of the stimulus to keep current on their debt?” Graseck said. “That borrower behavior, I think, is one of the trickiest things for anyone to model.”