President Joe Biden sees a better funded, more aggressive IRS as a major piece of his plan to make corporations shoulder the cost of his roughly $2.25 trillion infrastructure program.

A proposed agency funding boost would be paired with a broader enforcement initiative that will be announced in the coming weeks to address tax evasion among corporations and high-income individuals, the administration said in the outline of its plan Wednesday. The enforcement ramp up is one of several corporate tax changes proposed to offset the cost of planned investments in highways, bridges, clean energy infrastructure, and other infrastructure projects.

The plan adds to the recent bipartisan momentum on Capitol Hill to increase the IRS budget. It is a reversal from years of budget cuts that have resulted in the loss of more than 20,000 employees since 2010, impairing the agency’s ability to carry out core functions, including audits. 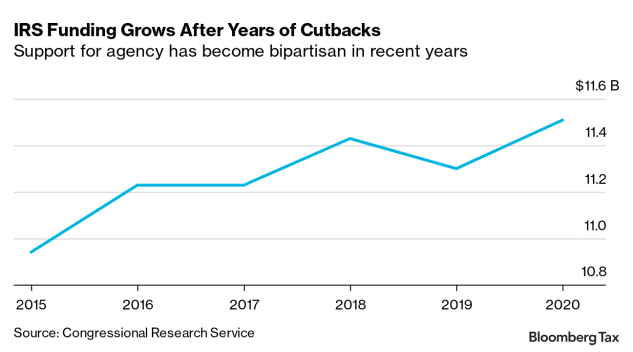 Audits of the returns filed by the U.S.'s wealthiest individuals and corporations have fallen drastically—the IRS, for instance, examined about 56% of 2015 returns filed by corporations with $20 billion or more in assets, compared to almost 85% of 2010 returns, according agency statistics. The IRS recommends using the 2015 data because it generally has three years to audit a tax return after it is filed, meaning more recent data isn’t complete.

The administration hasn’t yet elaborated on how large its investment in the agency will be or if there will be any strings attached to the funding. The White House is expected to soon release initial spending requests for fiscal 2022, which signal the administration’s priorities for congressional appropriators to carry out.

Former IRS Commissioner John Koskinen warned against mandating either a specific increase in the number of audits or employees focused on high-income individuals and corporations. Instead, he said there should be a general increase of the agency’s enforcement resources, with instructions to first apply them to audits of corporations and high-income individuals the agency wants to pursue but hasn’t because of budget constraints.

Leftover resources should be applied generally to audits that have been overlooked. This would make it clear that individuals and companies are being audited because of problems on their returns, not because of who they are, Koskinen said.

Guinevere Moore, a managing member at Moore Tax Law Group LLC, agreed that mandatory audit levels or quotas can be harmful, comparing them to ticket quotas for police that can result in people getting pulled over, even when they aren’t doing anything wrong.

Research indicates that investing in IRS enforcement can increase the amount of revenue the government brings in, but has varied on the degree.

IRS Commissioner Charles Rettig has previously said the agency brings in $5 to $7 for every dollar spent on enforcement.

Natasha Sarin, who recently joined Treasury’s Office of Economic Policy as a deputy assistant secretary for microeconomics, wrote a 2019 paper with former Treasury Secretary Larry Summers that argued increasing the IRS budget by $100 billion over the next 10 years would raise about $1.15 trillion. The Congressional Budget Office has been more conservative, predicting a $20 billion investment in IRS examinations and collections over 10 years would raise $61 billion.

Biden’s infrastructure package could raise deficits by $677 billion over 10 years, according to an estimate from Don Schneider, a former chief economist for House Ways and Means Committee Republicans, who is now a policy researcher for Cornerstone Macro. That deficit figure could come down because Schneider’s estimate doesn’t yet include revenues raised by proposed increases in IRS enforcement funding or changes to the international tax structure—an especially tricky area to forecast. The administration has yet to release detailed plans for those areas.

Despite raising the deficit, Democrats could still use a fast-track maneuver, known as budget reconciliation, to move the package along party lines if infrastructure spending ceases after eight years and revenues are higher at the end of 10 years, as Biden proposed in his outline. The administration’s claim that the plan will be fully paid for within 15 years is a political argument, rather than something necessary to use the procedure.

“I don’t think they feel the need to say over a 10-year window this is paid for,” Schneider said. “Biden’s agenda itself, that he proposed on the campaign trail, was never fully paid for.”