Many lobbying firms prospered in the first quarter of 2021 as President Joe Biden pushed his ambitious agenda including an infrastructure package.
Photographer: Leigh Vogel/UPI/Bloomberg

The Biden administration’s $4 trillion economic agenda is at risk of getting tangled up in the calculations of Congress’s budget scorekeepers.

Where the Treasury Department sees improved tax collection generating $700 billion in new revenue over a decade to help pay for programs, the Congressional Budget Office’s guidelines and own estimates may result in the legislative agency projecting nowhere near that.

And while that gap may seem modest by the gargantuan numbers of Washington spending, it threatens a host of political difficulties, not least of which is making it harder for the White House to pass the plan without the support of Republicans. GOP lawmakers have said raising taxes and repealing parts of the 2017 tax overhaul are non-starters. 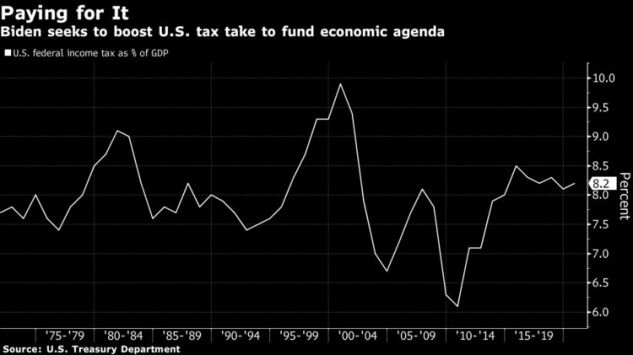 The dilemma represents another challenge with the special legislative process known as , which Democrats may use to pass much of Biden’s agenda without getting stymied by Republican filibusters. That tool comes with several catches, though, one of which is that provisions must be fully paid for in order to be made permanent, as some Democrats are advocating for the child tax credit.

If the CBO’s sum of estimated tax revenue comes in lower than the proposed spending, that could force lawmakers to consider more temporary measures, find more revenue elsewhere or scale back the investment proposals. The CBO issue adds to of the Biden administration’s revenue projections for enhanced tax collection.

“I don’t see any way they get to $700 billion, honestly,” said former CBO Director , now president of the American Action Forum. “They should be thrilled to get to $200-250 billion.”

A CBO spokesperson declined to comment, citing the lack of legislative text. A White House spokesperson said in an emailed statement that President “has put forward the policies he believes are best to pay for the American Jobs Plan and the American Families Plan.”

The Treasury Department has estimated that a new reporting requirement for banks and giving the Internal Revenue Service an additional $80 billion over a decade to boost enforcement efforts would bring in an extra $700 billion.

Those are some of the offsets identified for Biden’s $1.8 trillion American Families Plan, which includes a national paid leave program and free community-college tuition; the $2.25 trillion American Jobs Plan proposes funding infrastructure and home-care programs through higher corporate taxes.

Treasury expects the bank reporting element to raise $460 billion. The remaining $240 billion is projected to come from increased funding that would help the IRS boost enforcement through technology upgrades and new hiring, which traditionally wouldn’t get scored under the current CBO guidelines.

Those guidelines, set in the 1990s, restrict the CBO from counting revenues from increased IRS funding when determining the overall budgetary effect of legislative proposals.

“The rule on these proposals is that you can’t just appropriate money to the IRS and anticipate you’ll get more money back,” Holtz-Eakin said.

Even if lawmakers find a way around that restriction, it isn’t clear if the CBO and Congress’s Joint Committee on Taxation would agree with administration estimates that some have called optimistic.

The new requirement for banks to report aggregate account inflows and outflows would likely get a revenue score from the Joint Committee on Taxation, if it amends the tax code and the committee determines it could increase compliance without giving the IRS additional resources, JCT’s Chief of Staff said in an email.

A Treasury official acknowledged the potential scoring problem. Lawmakers could consider ways to account for more of the projected revenue -- including having the budget committees instruct CBO to use a specific estimate that is different from what the office would otherwise use, the official said. The move is known as “directed scoring.”

The CBO guidelines could also be revised, the official said. To do that, there would have to be agreement between CBO, the House and Senate budget committees, and the Office of Management and Budget.

After the maneuvers used by Republicans to pass the 2017 tax law, Democrats will be less concerned about changing rules to ease passage of their priorities, said a former Democratic Senate staffer who’s tracking the administration’s efforts closely and requested anonymity to speak freely.

The path forward won’t be easy. Tension already exists between Democrats and the administration over Biden’s plans. Lawmakers are pushing for some changes that would widen the potential gap between new spending and additional tax revenue, such as easing limits on a deduction for state and local taxes.

Even if the CBO rules do change, the Biden administration’s overall revenue projections face questions. The Penn Wharton Budget Model estimated that Biden’s proposed IRS enforcement expansion would raise almost $480 billion over a decade, rather than $700 billion.

, a senior vice president at the Bipartisan Policy Center, was skeptical that Treasury’s $460 billion estimate for the bank reporting requirement would hold up on Capitol Hill.

“I doubt CBO or Joint Tax will ever score their proposal as raising the amount of money” that the administration projects, Hoagland said. “People who want to avoid paying taxes will find quick ways around that if they think their bank is going to be audited for their accounts.”

To contact the reporters on this story:
in New York at aversprille1@bloomberg.net;
in Arlington at cwilhelm9@bloomberg.net