This week we launched the new International Forum with a piece from Peter A. Glicklich and Heath Martin of Davies Ward Phillips & Vineberg on the U.S. response to unilateral digital taxation. In this new series, members of the Bloomberg Tax Forum will share their views on important tax topics throughout the year. 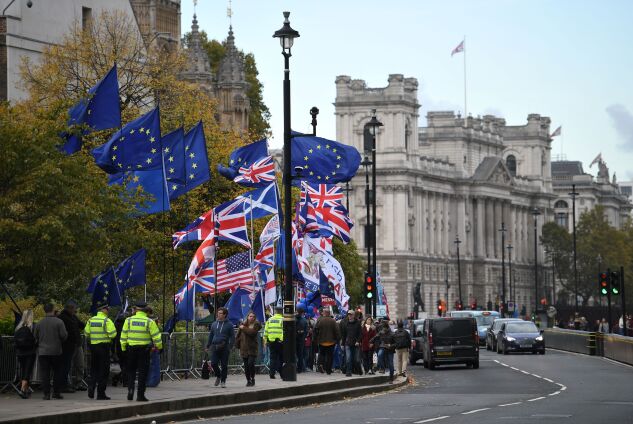 Demonstrators hold EU and UK flags as they walk near the Houses of Parliament in central London on Oct. 29
Photorapher: Daniel Leal-Olivas/AFP via Getty Images

Prenuptial agreements were once used only by the very wealthy, but their use could be growing. Bob Boyd of Boyd Collar Nolen Tuggle & Roddenbery and Beth Garrett of Frazier & Deeter explain the increasing interest in prenups and how the 2017 tax law affects existing and new agreements. Read: Effects of The Tax Cuts and Jobs Act of 2017 on Prenuptial Agreements

The effects of Wayfair extend far beyond a going-forward obligation on online retailers to collect and remit sales tax in states that have enacted the applicable legislation. Jennifer Weidler Karpchuk of Chamberlain Hrdlicka outlines the sales tax liability issues that need to be on an M&A due diligence checklist. Read: M&A Due Diligence Checklist Post-Wayfair

Robert Rojas of Rojas & Associates examines the challenges involved in making charitable dispositions of replacement securities in the context of an employee stock ownership plan. The author encourages clarification of the relevant tax rules pertaining to such dispositions. Read: Charitable Dispositions of Replacement Securities in an ESOP Context

A new book by economists Emmanuel Saez and Gabriel Zucman, “The Triumph of Injustice,” argues that economic inequality in the U.S. has worsened significantly over the last few decades. Aparna Mathur of the American Enterprise Institute and Kyle Pomerleau of the Tax Foundation challenge the the authors’ methodological assumptions and resulting conclusions. Read: The Failure of ‘The Triumph of Injustice'—Understating Taxes at the Top and Incomes at the Bottom

The lower corporate tax rate might encourage some small business owners to switch from S corporation to C corporation status. Robert Willens examines a case where three family-owned corporations regularly switched back and forth—while trying to keep the S corporation tax benefits. Read: Switching From S Corp to C Corp and Back Didn’t Work Out for Shareholders

Gary Ashford of Harbottle and Lewis LLP considers the current status of global attempts to address the taxation of the digital economy, and reviews the measures the U.K. has adopted. Read: The Changing World of Technology and Intellectual Property Taxation

Deals where California municipalities share a portion of their sales tax revenue with companies like Apple Inc. will continue, but with more disclosure. Mark Nachbar and Joseph Dean of Ryan LLC outline the legislation that the governor signed and the more severe bills that were vetoed. Read: California’s Response to ‘Corporate Welfare’

Bloomberg Tax contributors from both the U.S. and abroad have been staying abreast of the ever-changing status of the U.K.'s exit (or not) from the EU and what multinational businesses need to do.

Robert Marchant of Crowe explained the importance and relevance of Incoterms in international trade, and particularly for the U.K. in light of Brexit.

Monique van Herksen and Hatice Ismail of Simmons & Simmons referred to Dutch and British guidance to analyze the sixth major amendment to the EU Directive on Administrative Cooperation in the field of Taxation (DAC 6), which imposes a new reporting requirement for tax advisers and their clients.

Eli Lilly General Counsel Michael Harrington examines why amending Rule 702 on expert testimony is a good idea. He says a clarifying amendment would go a long way toward ensuring that insufficient and unpredictable standards won’t interfere with just outcomes in courts of law. Read: Everyone Has an Opinion—But Not Everyone’s an Expert

Mentors and sponsors don’t serve the same purpose and are hard to come by, but both are critical in BigLaw, writes Bryan Cave Leighton Paisner’s Stephanie Wickouski. In addition, touted successes of BigLaw programs could be tainted by associates feeling pressure to provide positive feedback. Read: Can Mentors and Sponsors Be Found and Coexist in BigLaw?