On Oct. 17, 2018, Canada became the first major Western nation to legalize the recreational use of marijuana.
Photographer: Chris Roussakis / AFP via Getty Images

Canadian SPACs are courting U.S. cannabis startups to grant them access to quick cash and the U.S. public market, but that backdoor method to getting listed in the U.S. could come with a punitive tax hit.

It isn’t legal for many cannabis companies to go public in the U.S., leaving investors eager to cash-in on the marijuana boom no choice but to trigger an “anti-abuse” rule that could wipe out half of any future payout and drag future valuations.

Yet seven Canadian special purpose acquisition companies are ready to deploy $1.9 billion in pursuit of U.S. cannabis companies and other entities, according to data from Viridian Capital Advisers.

One of those SPACs, Choice Consolidation Corp., raised over $175 million Feb. 19 through an initial public offering on Canada’s New Stock Exchange, nearly doubling its initial target of $100 million.

“We felt like if there was an opportunity to upsize to a prudent amount, we could still find four or five times the enterprise value, meaning we’re looking to do a qualifying transaction in the range of $600 million to a billion dollars,” Choice CEO Joe Caltabiano told Bloomberg Tax.

Caltabiano said he’s speaking with a dozen U.S. target companies with hopes of striking a deal within 60 days, and specified that he structures agreements to maximize tax benefits for both parties.

But that’s not always the case as companies clamor for part of a North American cannabis market projected to grow about 30% percent a year to $65 billion by 2027.

“We see U.S. clients that have rushed into foreign or Canadian SPAC transactions without seeking the proper professional advice,” said Todd Tigges, leader of UHY LLP’s national cannabis practice based in Michigan. “Once they are forced to report these transactions and we start peeling back the onion, we find that they may have unknowingly created an inversion situation and be force to pay additional taxes.” 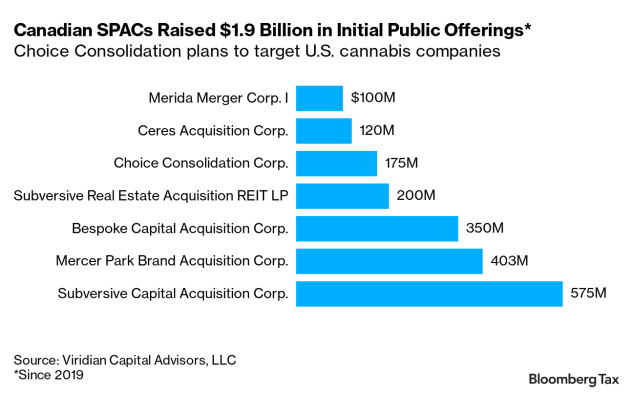 SPACs, also known as blank-check companies, are funded by public investors prior to identifying a target company to combine with or buy. They have raised nearly $66 billion globally in 2021—putting those deals on track to exceed last year’s record of $83.9 billion. And U.S. cannabis companies are ready to seize on the cash-frenzy to escape U.S. legal limitations and accelerate their windfall.

“This is the sexy stock right now; everyone wants to own cannabis,” said Tigges. “And the only way startup owners can actually monetize their investment is by listing on a public exchange and selling to the public.”

But rushing to get acquired by a parent company based in Canada, which legalized recreational marijuana use in 2018, may trigger an Obama-era tax hit on some companies that move offshore to avoid U.S. taxes.

Those so-called anti-inversion rules were designed to stop companies from shifting intellectual property or operations out of the U.S. for tax planning purposes. And the mechanics of the rules single out cannabis companies and their investors—and hit them with double taxes, U.S. withholding obligations, and limitations on when they can sell shares.

The Biden administration wants to revive the fight against companies that use inverted structures to offshore IP and evade taxes. If the plan becomes law, it would make navigating cross-border cannabis mergers a bigger challenge.

The National Cannabis Industry Association said investors are likely expecting the current Congress to pass more cannabis-friendly legislation with little to no opposition from the Biden administration, which is driving optimism in mergers and acquisitions.

Fifteen U.S. states and the District of Columbia currently permit legal cannabis sales for recreational use, and New York will join them next year and immediately become one of the nation’s largest markets. Recreational marijuana also is scheduled to become legal in New Mexico in 2022 and Virginia in 2024. And most states already allow cannabis use for medicinal purposes.

“This is one industry that, for now, has no choice but to deal with the anti-inversion rules—and just by nature of the transaction it’s a certainty that this issue would be encountered and dealt with,” said Irina Pisareva, partner at Sullivan & Worcester LLP in New York.

Cannabis sales are on track to grow in the double digits in North America in 2021, according to a Bloomberg Intelligence report.

SPACs began eyeing cannabis companies in 2019, because valuations were lagging from poorer-than-expected 2018 and first-quarter 2019 earnings. But the market really started taking off in the first quarter of 2020 when governors of most states with legal cannabis sales deemed those services as essential amid the coronavirus pandemic.

“Buyers and acquirers saw a yard sale—an opportunity to be an aggressive acquirer of assets because of the downturn in cannabis company valuations,” said Scott Greiper, president of Viridian Capital Advisors, LLC in New York, who advises cannabis companies on raising capital and M&A transactions.

Founders of some cannabis companies now want to seize the moment and go public so that they can raise capital that would help them consolidate, expand their business to different verticals in the cannabis space, and take advantage of historically high valuations of public cannabis companies.

“The biggest challenge as you continue to expand is basically the access to capital and what you might have as a cash-equivalent funding mechanism for these acquisitions,” said Fabian Monaco, president of Gage Cannabis Co., a Toronto-based cannabis company that went public through a traditional IPO in 2020. “There aren’t a lot of U.S.-based, publicly traded cannabis companies that have the opportunity to be front and center with investors.”

But tapping into the U.S. stock market for cash isn’t straightforward for cannabis companies that engage in the “leaf production” aspect of the business.

The New York Stock Exchange and Nasdaq don’t allow companies that violate federal law—like plant-touching cannabis and hemp companies—to list on their exchanges. And that drives founders of those companies to enter into lucrative deals with Canadian SPACs that give them an opportunity to legally list on alternative U.S. exchanges like the OTCQX, the over-the-counter exchange.

“This is where the inversion rules come into play because many times, the target shareholders will own substantial shares of the parent company in Canada, and that could lead to scenarios where the foreign SPAC is treated as a domestic corporation for tax purposes,” said Friedemann Thomma, a partner and international tax chair at Venable LLP in San Francisco.

When a Canadian SPAC acquires more than 80% of a U.S. company, the anti-inversion rules treat any profits that flow up to the Canadian company as U.S. income. And that triggers different tax consequences for U.S. shareholders and foreign shareholders of the cannabis company.

“There is no fix to this once you invert a company,” said Thomma. “And it’s not like companies aren’t disclosing this. It’s just that as an investor you need to be aware that you might have a funky tax result that you didn’t expect.”

For example, a Bermuda-based foreign shareholder of a U.S.-Canada inverted company won’t have access to treaty benefits that would shield them from withholding taxes on dividends. So when that inverted company pays out a dividend, the SPAC is required to withhold taxes twice: once at 30% in the U.S. and once at 25% in Canada.

“And the withholding is just one of the taxes,” Thomma said. So from a monetization strategy, those foreign shareholders should be more focused on generating capital gains, instead of dividends—because the taxes wipe out so much of the return on capital, he said.

U.S. shareholders would only pay a single withholding tax in Canada, but then also pay federal income taxes on dividends in the U.S. And because the dividends are deemed to have come from a U.S. company, the shareholder is stuck paying double taxes on those dividends by losing access to foreign tax credits.

The inversion rules still apply when a U.S. company transfers less than 80%—but more than 60%—of its shares to a Canadian parent, though the offshore shell company in those cases is not deemed to be a U.S. entity for tax purposes. The Biden proposal would tighten those rules.

The U.S. deems the transfer of those U.S. shares to be a taxable gain event—which can cost into the millions, depending on the size of the deal, practitioners said. And the shareholders are restricted from using tax benefits that would otherwise mitigate the size of the tax bill.

“You can’t offset with net operating losses or foreign tax credits, so in that way it is painful,” said Andre Benayoun, partner at Marcum LLP in Fort Lauderdale, Florida.

U.S. shareholders may also have to pick up other types of income—like royalties and sales gains—over a 10-year period following the ownership change, Benayoun said.

Adding to the problem is a mandatory one-year waiting period under securities law where shareholders are restricted from selling shares. So if a taxable gain is triggered, some investors may not have access to enough cash to pay that tax bill when it is due.

“It often becomes a real problem, and that’s why these deals are structured to qualify as full inversions over 80%,” Benayoun said. “But it’s still a possibility if you’re not paying attention.”

And those surprises can catch companies that are planning to meet a particular threshold, because the anti-inversion rules restrict the way public investment dilutes U.S. shareholder’s holdings in the SPAC.

“These deal-makers often think they found a solution that puts them at a lower threshold like 50 or 60%, but then they realize that public capital doesn’t count and they get slammed as if they’re 100% inverted,” Benayoun said.

Another drag on valuation is Section 280E of the U.S. tax code, which bars cannabis businesses and other “drug traffickers” from reducing taxable income with deductions or credits.

“When you create a valuation for the company, among other things you have to take into account the tax expense,” said Pisareva. “Because if you think about it, you know, tax could in many instances be one of the most significant expenses, reducing the expected return on investment.”