Vehicle sales advanced for a third straight month in China, signaling that an economic rebound is gathering pace as the coronavirus pandemic gradually abates in the country.

Sales of passenger cars such as sedans and SUVs, as well as commercial vehicles, increased 11% in June from a year earlier to 2.28 million units, the China Association of Automobile Manufacturers said Thursday in a statement, citing preliminary figures. From the preceding month, the increase was 4%. 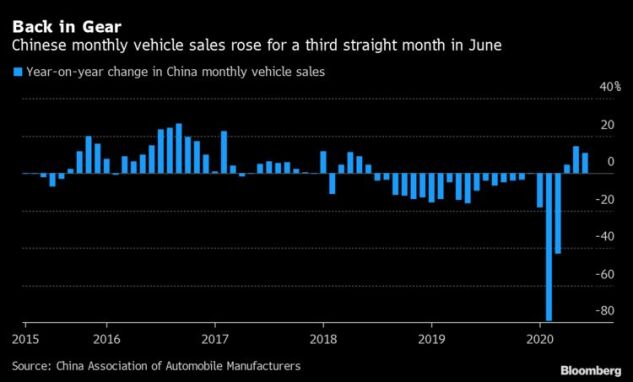 Customers in the world’s largest car market are slowly returning to showrooms as the government eases restrictions, adding to evidence that the auto slump in its third year may be easing. The pandemic exacerbated a decline in sales, with an economic slowdown, trade tensions with the U.S. and stricter emission standards further weighing on demand.

The government added stimulus measures such as tax rebates to attract buyers, while automakers that shuttered operations amid the coronavirus outbreak now offer generous discounts.

“The 11% growth in June estimated by CAAM should be largely driven by commercial vehicles,” said , an analyst with Haitong International Securities Co. in Hong Kong. “High inventory level industrywide and slower recovery for some brands could lead to widening discounts in the second half.”

Global carmakers are spending billions of dollars to expand in China, and manufacturers such as , and remain undeterred in their effort to tap the market’s long-term growth potential, including for electric vehicles.

CAAM didn’t break out figures for commercial vehicles and passenger cars. Commercial vehicles such as light trucks have benefited from the economic recovery, which has boosted demand for deliveries. A manufacturing released this week points to continued improvement in both demand and supply in June.

Chinese car associations are set to report the final tally for June later this month, including figures specifically for passenger cars. The year-earlier number in that category represents a tough goal to beat, as sales were boosted by by dealerships.

To contact the editors responsible for this story:
at mtighe4@bloomberg.net