University of Michigan students Peyton Grant (L) and Lizzy Anderson packed up to move out of their dorm on March 17. The university is now among the schools anticipating massive revenue shortfalls as it deals with the fallout from the coronavirus pandemic.
Photographer: Gregory Shamus/Getty Images

U.S. universities are seeking targeted tax relief from Congress after sending students home and wrapping up the spring semester via webcam.

Their asks range from advance refunding of tax-exempt bonds to the suspension of levy on the investment returns of large endowments of private colleges. The need for such relief is mounting as the pandemic has slowed donations, shuttered campuses, and pushed the return of college sports far into the future. Colleges such as George Washington University are anticipating revenue shortfalls in the hundreds of millions, while the University of of Michigan said its gap could be to as much as $1 billion.

But the optics of helping colleges, especially the most wealthy and elite institutions, are tricky. Lobbyists hope their requests can be included because there is already some bipartisan interest in getting more assistance to students. The provisions could be worded in a way that brings relief to sectors beyond higher education, higher education advocates say.

House Democrats released their package on Tuesday and are expected to vote on it this week. The legislation is a marker of Democratic priorities on what to include in the next coronavirus relief package, which will need to survive negotiations with Senate Republicans and the White House. The bill would bar colleges from using federal aid to boost endowment funds and also clarifies that emergency aid to students isn’t subject to taxes.

When it comes to securing the financial stability of colleges, a priority of lobby groups is new bond financing. They’re asking lawmakers to restore advance refunding of tax-exempt bonds, which was eliminated in 2017 tax law, and to create a temporary pandemic response bond program.

“Now more than ever, that would be a really good way for campuses to access some liquidity that is desperately needed,” said Megan Schneider, senior director of government affairs at the National Association of College and University Business Officers.

“We are definitely pushing for direct higher ed relief generally that is more flexible than the last round,” said a Senate Democratic aide. “We are also pushing hard for flexible state and local fiscal relief which will help states continue to support higher ed.”

Relief for All Nonprofits

University-targeted measures may prove too politically unpopular to deliver.

That has played out in the initial relief, with major pushback from President Donald Trump and others prompting Harvard—which had an endowment valued at more than $40 billion before the downturn—to decline the $8.6 million it was allotted. The CARES Act aid was meant to help schools, regardless of the size of their endowments

“Congress and just people in general are upset at how much it costs to go to college, so they view that as as the fault of the institutions,” said Alex Reid, a partner at Morgan Lewis Bockius LLP.

Lawmakers would rather see have universities dip into their savings before taking small business loans, he added.

But broader relief to help nonprofits could help colleges by extension. Congress has already created a $300 above-the-line deduction—meaning people who take the standard deduction can claim it—for donating to charity.

“There seems to be a lot of interest, particularly in the Senate, to increase $300 to something much higher, “said Sandra Swirski, a public policy attorney with Urban Swirski & Associates LLC, adding that along with a larger benefit, Congress wants to make sure the money ends up in the right place.

“All charitable giving incentives are really helpful for colleges,” Reid said. “Increasing the charitable deduction is something that everyone is in favor of, and that is consistent with the rest of the charitable sector.” 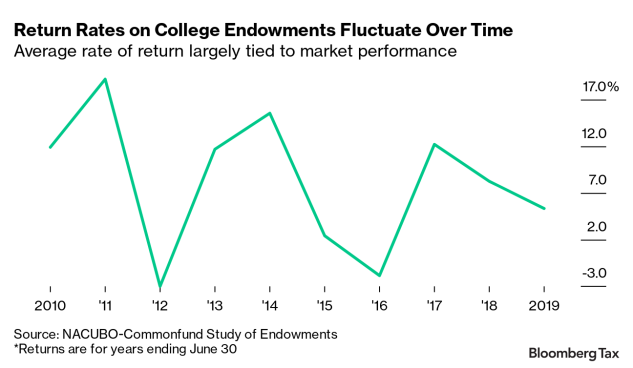 The economic upheaval from the pandemic has reduced the value of those endowments at many schools, and may continue to do so. But Congress has a limited appetite for delivering on requests to defer a tax on endowments held by the wealthiest colleges.

As part of the 2017 tax law, lawmakers enacted a 1.4% excise tax on net investment income at private colleges with assets worth at least $500,000 per student. About 30 institutions fit those criteria.

Republicans had argued for years that colleges with large endowments should be penalized if they didn’t spend more of their returns on student aid. College lobby groups say the endowment tax was ill advised when it was created and now especially makes little sense when colleges are facing big declines in investments.

The American Council on Education and about 40 other college lobby groups urged congressional tax writers to suspend the endowment tax.

“Everyone’s just distance-learning right now so it doesn’t make sense,” Reid said. “It makes sense to suspend that rule for the duration of the outbreak.”

The IRS has already offered some relief to students, saying it won’t tax emergency student grants provided by the CARES Act to help pay for unexpected costs after campuses closed.

Meanwhile, Trump and Republicans have pushed colleges to start spending from their endowments, even though the funds are often restricted.

The average payout from private university endowments was 4.7% in fiscal 2019, according to data from the NACUBO-Commonfund Study of Endowments.

Rep. (R-N.Y.), a major supporter of the endowment tax, said colleges shouldn’t rely on federal coffers and some “well-established, well-funded institutions” will survive on their own.

“Now more than ever, I would encourage them to use those endowments,” he added. “There’s probably additional efforts we can do to further assist. But the bottom line is that if we don’t open and if these institutions don’t get back students on campus, that to me is the biggest barrier to their future.”

Sen. (R-Mo.) introduced a bill (H.R. 6651, S. 3589) this month to block emergency aid from going to colleges with endowments of $10 billion or more unless they spend down additional endowment money on emergency student relief.

If that bill were wrapped into a broader package, it would get swift pushback from higher education advocates.

Steven Bloom, director of government relations at the American Council on Education, said the value of endowments at even affluent institutions has declined because of the pandemic’s economic damage. The value of U.S.-traded stock holdings of Harvard University’s endowment dropped by almost a third in the first quarter, Bloomberg News reported this month.

“When those resources have declined as a result of this crisis, it doesn’t make sense to tax those dollars and send them to Washington,” he said. “It makes more sense to keep them there on those campuses.”