With New York City residents dialing 911 for medical services at a rate not seen in nearly two decades, Governor and Mayor said lawmakers in Washington weren’t doing enough to respond to the spiraling coronavirus crisis.

Cuomo has been the chief outside-the-Beltway of the Trump administration’s response as New York has added thousands of new coronavirus cases every day. The peak of infection is still about three weeks away, Cuomo said, and city and state authorities are racing to add capacity to handle as many as 140,000 cases.

In a sign of the grim calculus facing officials, Mayor ’s administration is and shipping containers to store bodies if morgues get full. Also on Wednesday, the Four Seasons New York hotel said it would make its rooms available at no charge to medical personnel, in response to the governor’s plea for help.

Cuomo, in his daily briefing on the outbreak on Wednesday, called out lawmakers in Washington, saying the stimulus package working its way through Congress was inadequate and “terrible” for his state. 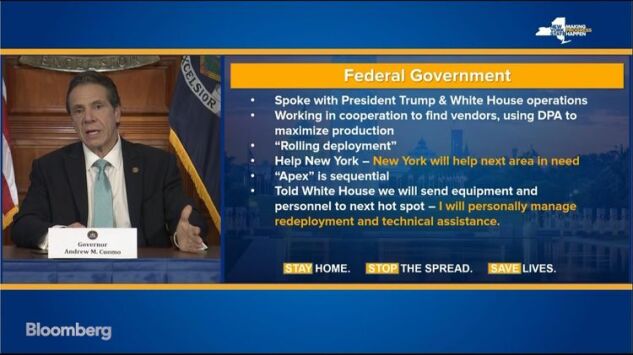 ”They gave us less than 1% of the money they were giving out to cities and states, and we have a third of the cases in the nation,” he said during a call with the media on Wednesday. “That’s just immoral.”

Cuomo has demanded that Trump invoke his national-security authority to speed production of ventilators and other medical equipment. He has also said that helping New York would also help other regions where the outbreak probably will flare up next.

“The apex highpoint will be sequential across the country,” Cuomo said. “We’re asking the country to help us, we will return the favor.”

The crisis was upon the city, with spiking. By Tuesday, the volume was higher than on any day since the Sept. 11, 2001, terrorist attacks, according to Oren Barzilay, the president of a local of the American Federation of State, County and Municipal Employees that represents paramedics and dispatchers.

Barzilay attributed the surge to respiratory symptoms consistent with Covid-19, the disease caused by the coronavirus.

Some news was hopeful. In spite of the skyrocketing numbers, Cuomo offered data showing that the health system has been able to handle the crisis so far.

Only 3% of infections, fewer than 900, have required intensive care with ventilator support, below the state’s current capacity of 3,000 beds -- with the ability to quickly add as many as 14,000 ventilators from a stockpile.

Also, the restrictions on daily life in New York have slowed the increase in hospitalizations. About 12% of confirmed coronavirus patients need hospitalization, he said, compared with 23% on March 18. The decrease could be attributed partly to expanded testing that has detected mild infections not requiring in-patient care.

“This is a very good sign and a positive sign. Again, I’m not 100% sure it holds or it’s accurate, but the arrows are headed in the right direction,” Cuomo said.

The state hasn’t had to call on volunteer medical staff. For the near future, medical workers have enough masks, gloves, gowns and other equipment to protect them, Cuomo said. And at the current rate, the governor said he doesn’t anticipate having to make the grim choice of prioritizing ventilator assignments.

Still, the governor said the state ultimately expects to be slammed with 140,000 infections, with as many as 40,000 requiring intensive care. The peak expected in about three weeks could outpace the state’s ability to treat them, he said.

In the event that morgues are overrun, the city medical examiner and Emergency Management department have devised a so-called mass fatality management plan to be distributed to hospitals, according to city disclosures.

Officials have purchased 45 refrigerated tents and trailers to catch any overflow of coronavirus fatalities from the five morgues, according to Aja Worthy-Davis, a spokeswoman for the Office of Chief Medical Examiner.

The plan includes detailed specifications for refrigerated mobile units, called body collection points, as well as a checklist of requirements that must be met by funeral directors and next of kin before bodies can be released for burial.

Workers have already erected a large tent and installed trailers by the morgue in lower Manhattan, Worthy-Davis said.

“We’re putting them out near major hospitals as a precautionary measure to prepare for the worst-case scenario,” Worthy-Davis said. “We very much hope we don’t need them.”