The Biden administration will be jumping in the middle of the OECD negotiations on a global tax overhaul, with little time to make key policy decisions.
Photographer: Joe Raedle/Getty Images

President-elect Joe Biden’s Treasury Department is facing a narrow window if it wants to put its stamp on an OECD-led effort to overhaul global tax rules in 2021.

The OECD wants to get nearly 140 countries to agree to a plan by next summer—which won’t leave much time for Treasury staffers to take on their new roles after Biden takes office Jan. 20, firm up the U.S.'s negotiating position going forward, and engage in the talks.

“Even under the best of circumstances, there will likely not be senior folks in place at Treasury until April or May” of 2021, said Will Morris, deputy global tax policy leader at PwC and chairman of the tax committee at Business at the Organization for Economic Cooperation and Development, an advisory group. “There’s a time crunch there.”

The stakes are high. A delay at the OECD could spur more countries to launch unilateral measures. Without a global agreement, tensions over digital tax could escalate into a wide-scale trade war. At the same time, companies have voiced concerns that the OECD’s plans are overly complex and raise the risk they’ll face double tax and more disputes with tax authorities.

“The transition from one administration to another is a lot of work, there are thousands of policy initiatives that need to be considered and resolved, and you need people in place,” said Barbara Angus, global tax policy leader at EY.

The OECD’s two-pronged plan aims to address concerns that some multinationals—especially U.S. tech giants—aren’t paying enough in taxes. Countries are still trying to find common ground on key issues, including the scope of the new rules, that new U.S. leadership will have a chance to weigh in on.

Next steps for the OECD will be collecting public comments on the two pillars until mid-December, then debriefing on the results of the consultation in January, Pascal Saint-Amans, director of the OECD’s Center for Tax Policy and Administration, said in October. Next year “will be the do-or-die year” for finding agreement on the plan, he said.

Several pieces of the OECD plan would require legislative changes, including Senate approval of tax treaties.

“It’s probably going to be necessary to get congressional buy-in on anything that the Treasury would agree to at the OECD,” said Jeff VanderWolk, a partner at Squire Patton Boggs in Washington.

The U.S. may have to pass legislation to implement Pillar One of the OECD plan, which seeks to reallocate a portion of multinationals’ profits to where they have consumers but a limited physical presence. For example, Pillar One could require statutory changes to the rules that determine when revenue is taxable in the U.S., and the mechanisms that offer companies relief from double taxes, Angus said.

“Really fundamental building blocks of the U.S. international tax code would need to be changed, and that’s all legislative,” she said.

Pillar One could require the U.S. to change treaties, regulations, statute, or some combination of those, John Merrick, senior level counsel at the IRS’s Office of Associate Chief Counsel (International), said Nov. 11 at a virtual conference hosted by the American Bar Association.

It’s less clear what the U.S. will have to do to join an agreement on Pillar Two, a global minimum tax. Recent OECD documents have indicated that U.S. companies might get a full or partial pass on the new global rules because they’re already subject to a minimum tax on U.S. corporations’ foreign earnings under the 2017 tax law, known as global intangible low-taxed income (GILTI).

Congressional leaders from both parties have voiced support for the multilateral process in the past—indicating that there could be bipartisan support for the process going forward, said Sarah Shive, vice president of government affairs and counsel at the Information Technology Industry Council.

Wyden’s position hasn’t changed, a spokesperson said Thursday. “He continues to oppose unilateral measures and support the U.S. continued engagement with the multilateral process,” she said.

House Ways and Means Committee Chair Richard Neal (D-Mass) “supports a multilateral solution at the OECD that is fair to U.S. businesses and protects both U.S. workers and our tax base,” a committee spokesperson said. “He looks forward to working with the Biden Administration to find a thoughtful solution that reflects U.S. tax and trade interests.”

House Ways and Means Committee ranking member Kevin Brady (R-Texas) “strongly supports” the OECD process, and"wishes other countries would respect that process instead of unilaterally imposing punitive taxes,” his spokesperson said. “But until those negotiations are done, it’s way too soon to speculate about what the congressional reaction would be to the final product.”

Sen. Mike Crapo (R-Idaho), in line to become the top Republican on the committee, declined to comment about the next Congress. 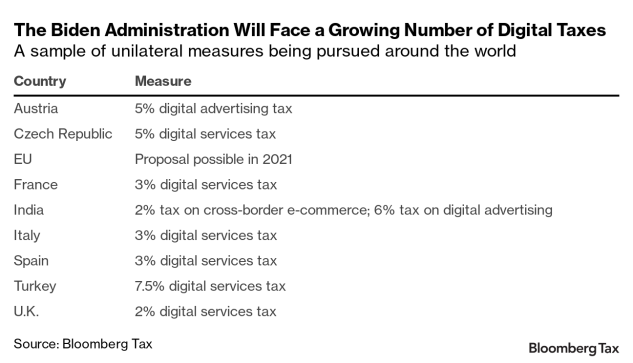 Aside from the political hurdles, the Biden tax team must tackle key technical issues on the OECD plan.

Some countries have argued that Amount A—the part of the Pillar One plan that would reallocate a portion of some multinationals’ profits from countries where companies are headquartered to ones where they have users or consumers—should apply to digital companies.

The U.S. has long opposed rules that “ring-fence” or single out the tech industry—a stance that’s been consistent across the Obama and Trump administrations, and could hold true into a Biden administration.

If Amount A just targets digital companies, tax revenue would move from the U.S. to other countries—something the U.S. isn’t likely to support.

“Would Pillar One in its final form be a revenue-raiser, or would it cost revenue, from a U.S. perspective? That’s a huge issue for any administration in thinking about tax legislation,” Angus said.

Until the project is developed further, it will be hard to estimate the economic impact on the U.S., she added.

The OECD plan has another option, which would target the profit reallocation rules at both digital services and consumer-facing businesses. But current Treasury Secretary Steven Mnuchin asked late last year that companies be allowed to opt into Pillar One rules. The idea has met strong resistance from other countries, which say the new rules won’t work if they’re optional.

“Question number one is, will the new Treasury Secretary stick to Mnuchin’s position about wanting Amount A to be optional? And if not, if there’s going to be more of a willingness to talk about Amount A as a mandatory thing, how can the other countries be confident that Congress would play along and actually pass any necessary legislation?” VanderWolk said.

—With assistance from Kaustuv Basu and Lydia O’Neal.