Senate Democrats say they want $350 billion for minority communities in the next stimulus bill to address needs ranging from child care to infrastructure, adding a new demand as lawmakers prepare to start crafting another massive virus relief package.

That would add to the $3.5 trillion plan recently passed by the Democrat-led House and endorsed by party lawmakers in both chambers. The Senate Democrats’ propose getting $200 billion of the amount by tapping unspent money from a fund set up in the massive stimulus measure approved in March that facilitates corporate lending by the Treasury Department. 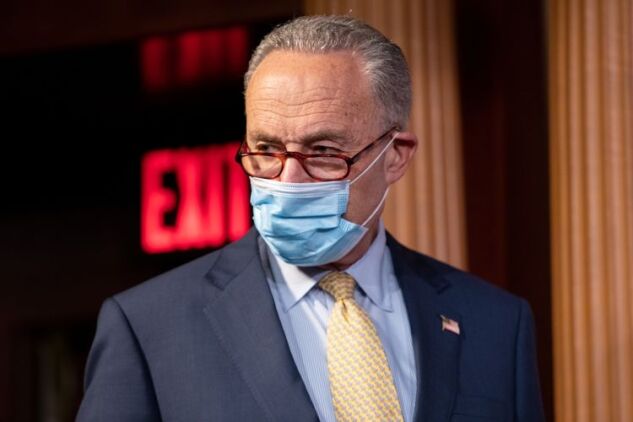 Democrats released a summary of the plan Thursday.

”Long before the pandemic, long before this recession, long before this year’s protests, structural inequalities have persisted in health care and housing, the economy and education,” Schumer said on Wednesday. “Covid-19 has only magnified these injustices.”

The new demand is likely to complicate talks between the two parties on the next round of relief.

Senate Majority Leader is preparing a Republican-only plan with the Trump administration that is expected to be about $1 trillion. McConnell says that he would engage later with Democrats for a final measure that he wants to see focused providing incentives for schools to restart, extending unemployment benefits and also providing liability protections for employers who return employees to their workplaces.

Democrats are balking at McConnell’s early maneuvers to draft a bill without Democratic input.

Schumer on Tuesday told all Senate Democrats in a telephone call that McConnell has not reached out to him to discuss the next package to augment the $2.2 trillion stimulus that was signed into law in March, a Democratic aide said. He told the senators that McConnell’s plan for a Republican bill should be viewed as a way to sideline House Democrats, and that he won’t agree to any bipartisan talks without House Speaker present.

The Democratic proposal would provide an immediate infusion of $135 billion to minority communities to provide for child care, health care, and more job opportunities. Another $215 billion would be provided over five years for infrastructure, and expansion of Medicaid, a homeowner down payment tax credit and other needs.

The $500 billion Treasury fund that Democrats want to use to pay for much of the new spending could be target of both parties as they seek new ways to bolster the economy in the next bill.

A congressional watchdog in charge of overseeing the $500 billion bailout fund found that as of mid-June the U.S. Federal Reserve had lent just $6.7 billion through its emergency lending programs. The Treasury Department also has yet to distribute much of the money it has for air carriers and national security businesses, having finalized only one loan for freight shipping company , according to data published July 10.

To contact the reporter on this story:
in Washington at llitvan@bloomberg.net