U.S. House Speaker Nancy Pelosi, a Democrat from California, with Sen. Chuck Schumer (D-N.Y.), who will take over next week as Senate majority leader. The Democrats say eliminating the deduction cap on state and local taxes will be among their top priorities.
Photographer: Stefani Reynolds/Bloomberg

Democrats will soon have the balance of power required to repeal President ’s limitation on a prized tax deduction, but doing so will likely require a tricky procedural process and a politically fraught vote.

There are few issues that have riled certain segments of the Democratic Party more than Trump’s cap on write-offs of state and local tax, or SALT. Repealing it, however, would require Democrats to vote for something widely seen as a tax cut for the rich at the same time the party is proposing tax increases to make the Internal Revenue Service code more progressive.

Democrats have been trying to restore unlimited SALT deductions since the 2017 tax law capped the benefit at $10,000. Lawmakers from high-tax states, including New York, California and New Jersey, where the tax break is particularly valuable, decried the move saying it was punishing their voters to pay for Trump’s $1.5 trillion tax cut for corporations and the wealthy.

Senator of New York, who will become the chamber’s majority leader thanks to the victories of and in this week’s Senate runoff elections in Georgia, said last year that abolishing the SALT deduction cap would be among his top priorities. 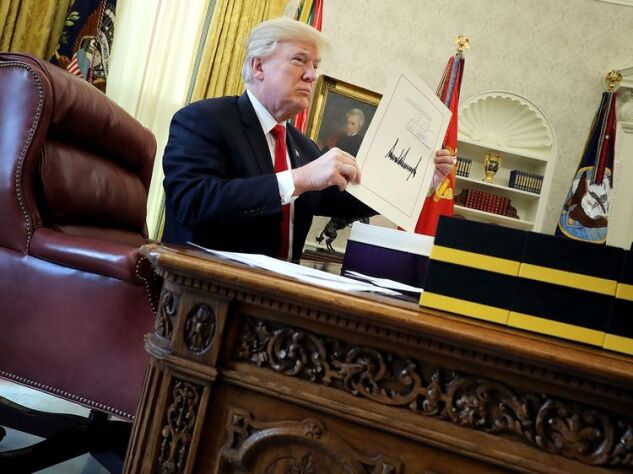 “When we get in the majority we’ll do it permanently,” Schumer said at a press conference on Long Island in July. His office didn’t immediately respond to a request to comment.

Senator , an Oregon Democrat poised to control the Finance Committee, said in a statement that he would be looking to lift the SALT cap as part of a broader tax agenda.

The politics are easy for lawmakers from high-tax states where many residents saw their deductions decline following the 2017 tax overhaul, but it’s a harder sell for Democrats in low-tax states where few constituents owe more than $10,000 in state income and property taxes.

It’s even trickier because allowing taxpayers to write off their full SALT bills largely benefits the wealthiest Americans. About 52% of the benefit from repealing the cap flows to households earning at least $1 million a year, according to the the non-partisan Joint Committee on Taxation.

Because of that, it’s earned a reputation among Washington economists and policy wonks across the political spectrum for being a dumb idea. , a former economic adviser to President has called restoring the full tax break a “.”

“At best, the SALT deduction is a warped way to do social policy; at worst it is a politically motivated handout to the richest people in the richest places,” two Brookings Institution researchers wrote in a report last year. “Either way, it is bad policy -- especially at a time of rising inequality.”

Still, Democrats are jazzed over the chance to restore a tax break that they say was included in the 2017 law by Republicans to hurt taxpayers in Democratic-leaning districts, including middle-income earners in areas where housing is expensive and taxes are high. Liberals see the cap as part of a broader strategy by conservatives to undermine support for progressive agendas.

“With Democrats in complete control of the federal government, and New York’s senior senator in charge of the Senate agenda, our chances for giving tax relief to middle class New Jerseyans have never been better,” Representative said in a statement. “I’m already working with my colleagues in the delegation who are chomping at the bit to restore the SALT deductions Republicans stole from our neighbors in their 2017 tax scam.”

Representative , a New York Democrat, is among the legislators leading the charge to repeal the cap. He said he wants it repealed in its entirety.

“The SALT deduction is based upon basic fairness,” Suozzi said. “You shouldn’t be taxed on taxes you have already paid.”

“The second part of the fairness issue is that state and local governments have been operating under this paradigm for a hundred years,” he added.

Shepherding the vote through the House and Senate will require the slim Democratic majorities in both chambers to stay united on what is likely to be a complex and sweeping economic policy bill.

The SALT repeal would likely be bundled with dozens of other tax and spending provisions in what’s known as a budget reconciliation bill, a fast-tracked process to pass legislation with a simple Senate majority -- rather than the normal 60-vote threshold.

That way, the chamber’s 50 Democrats, combined with a tie-breaking vote from soon-to-be Vice President , could pass the legislation without needing any Republicans to sign on.

Democrats have a long trail of defeats trying to get rid of the SALT cap. New York Governor went to court to invalidate the law. Governors of Democratic-led states, including Cuomo, then tried to use the judicial system to throw out regulations regarding the cap. So far, both efforts have failed.

House Democrats successfully passed a short-term repeal of the SALT cap in 2019, but the Senate didn’t consider it.

It’s an expensive proposition to fully repeal the SALT cap. Restoring the tax break would cost about $620 billion over a decade, according to an estimate from the Urban-Brookings Tax Policy Center. That’s about twice the cost the $1,200 stimulus payments Congress approved in March for most Americans. However, the Tax Policy Center projects that most benefits would fall to top earners, leaving middle-income households with an average tax cut of $10.

Democrats could opt to do something short of a full restoration of the SALT tax break that would blunt the disproportionate share going to the richest earners, said Seth Hanlon, a senior fellow at the Center for American Progress.

“For example, the cap could be raised but not eliminated, or Congress could extend cap relief only to households under a certain income level,” he said. “These options would cost a fraction of the revenue of total SALT cap elimination, and would be targeted at middle-class families.”

A more generous SALT break could also be coupled with tax increases on top earners that would cut into some of the savings they would receive.

A reversal of the SALT cap could also have an unintended consequence for state and local government coffers, another concern for Democrats. When the cap went into effect, it spurred a record municipal bond buying spree with investors turning to the tax-free securities as a tool to shrink their tax bills. Unwinding the cap risks doing the opposite -- imposing a slight dampening effect on markets with high taxes like New York and California.

Reversal would be a slight positive at the local level, and negative for states, both of which are struggling with economic fallout from the coronavirus pandemic, said strategist .

(Adds updates on cost in the 21st paragraph)