Rep. Tom Malinowski (D), who represents a wealthy district in New Jersey, said many of his constituents would be willing to pay more in taxes "if what they’re paying for is visible, tangible and useful to them."
Photographer: Ken Cedeno-Pool/Getty Images

President is asking congressional Democrats to vote for a tax increase that will test a long-held liberal article of faith: that many wealthy Democrats won’t mind paying more in taxes if they can be convinced the money would lead to greater prosperity for everyone.

Democrats now represent 65% of taxpayers with a household income of $500,000 or more, according to pre-pandemic Internal Revenue Service statistics. And as Congress begins considering Biden’s $2.25 trillion spending and tax proposal, Democrats are being explicit with their constituents about how much it’ll cost them -- and how much they say it will begin to address issues like income inequality. 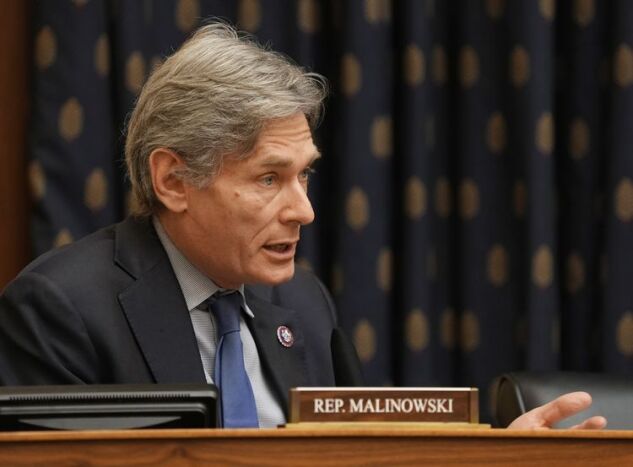 The sales pitch reflects their theory that wealthy Democrats will support paying higher taxes because of a changed economy and a political realignment that’s put cultural issues ahead of traditional pocketbook issues in voters’ minds.

“Many of my constituents would be willing to pay the bill if what they’re paying for is visible, tangible and useful to them,” said , a Democrat who represents a wealthy New Jersey district.

Former President accelerated the Republican Party’s transformation from the well-heeled party of big business to a more populist, working-class profile.

In 1993, the last time a president asked Congress to vote in a significant tax hike, the typical congressional district represented by a Republican was 14% richer than the typical Democratic district, according to household income data from the Census Bureau. By 2020, those districts were 13% poorer.

An anti-tax ethos remains part of the party’s DNA, even as fewer Republican voters would pay the tax increases directly. Nearly three-quarters, or 74%, of taxpayers in Republican districts had a household taxable income of less than $100,000, according to the IRS statistics, and wouldn’t see their income tax rate rise under Biden’s plan.

Republican members of Congress are more dependent than Democrats, though, on PACs that represent corporate interests. In 2016, House Republicans received about twice the donations that Democrats did from corporate political action committees. In 2020, business-interest PACs gave $181 million to Republicans and $135 million to Democrats.

After pushing a $1.9 trillion pandemic recovery bill through Congress on party-line votes, Biden has outlined even more spending to build or repair infrastructure and to buttress social welfare programs, which he argues would benefit working- and middle-class taxpayers.

The new spending would be partially paid for by an increase in the corporate tax rate -- to 28% from 21% -- and by returning the top rate for individuals to the 39.6% of the Clinton and Obama eras. Biden has promised that no household making less than $400,000 a year would pay more in taxes.

“I think President Biden gets it. He’s selling this plan primarily as a way to rebuild America,” Malinowski said. “That all makes sense to the people I represent. That’s an investment with an high return.” 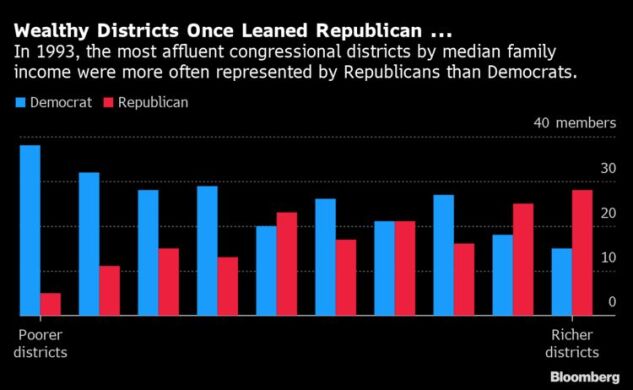 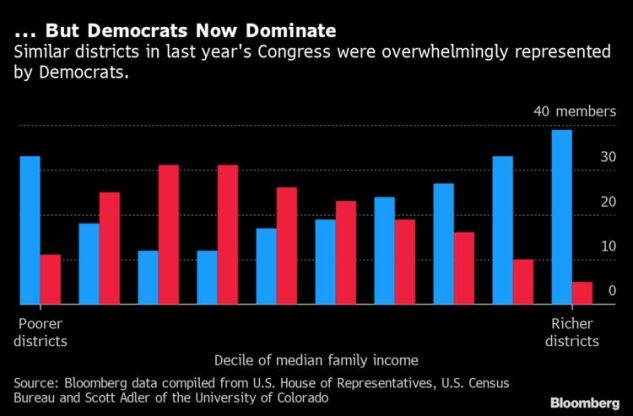 Malinowski flipped his suburban district to the Democrats in 2018 on a campaign of fiscal responsibility, an issue once dominated by Republicans that was abandoned in the Trump era. His district contains the eighth-highest percentage in the country of taxpayers with an adjusted gross income of $500,000 or more, about 7%. 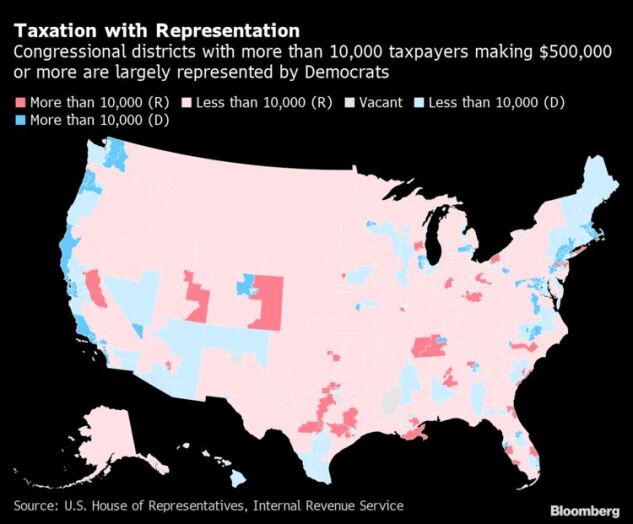 Representative ’s district ranks sixth in the nation by that same measure. But for the New York Democrat, addressing income inequality is a selling point.

His Long Island constituency includes parts of Queens --abutting the district held by Representative , a self-described democratic socialist. But other sections, like his home town of Glen Cove, also have a 12-bedroom mansion listed for sale at $19.9 million. 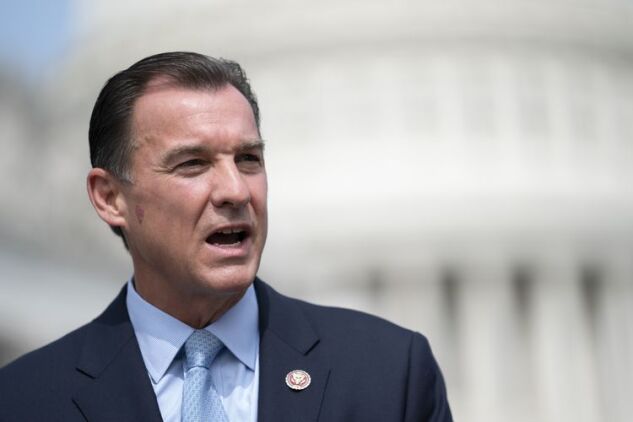 “I’m not a soak-the-rich type of person, but I’m a fairness person,” Suozzi said. “The pandemic has been cruelly uneven. I don’t want to see the solution of our income inequality be done solely through a redistribution method. But it’s a piece of the answer.”

Income inequality, one of the broader issues Biden says his bill will address, was on the rise long before the coronavirus pandemic. Since President ’s tax law in 1993, median incomes have increased 26% in real dollars, but those in the top 5% have seen their incomes go up 48%, according to the Census Bureau. Incomes in the bottom 10% have risen only 19%.

“It’s time to update some of our prior assumptions on tax policy,” said , a senior fellow at the nonpartisan . “We still imagine that we’re living at the height of the Reagan Revolution, and it was a long time ago.”

No Room for Error

But he lost 46 Democratic votes when the bill passed the House, and it took Vice President to break a tie in the Senate.

Now, Biden has less room to maneuver. His Democratic Party controls the House with 218 seats to Republicans’ 212, and five vacancies. If the vote were held today, Biden could afford to lose only three Democratic votes in the House -- and none in the Senate -- or his tax plan is doomed. And more defections could spell trouble for the 2022 midterms, when presidents typically see their House majority slip away.

But after losing the majority in the U.S. House in every congressional election from 2010 to 2016 -- largely to Republicans using tax and spending issues as a proxy for larger cultural themes -- Democrats took control in 2018, flipping several affluent suburban districts along the way.

“Things have changed in terms of more Democrats being willing to raise taxes, and that’s because there are fewer moderate Democrats remaining in Congress,” said former Representative , who lost his 2020 primary to a more progressive challenger. “The ideological battles within the Democratic Party have been kept to a minimum so far, but at some point I think that’s all going to come out.”

One Democrat who broke ranks with Clinton in the 1990s was Lipinski’s father, Bill, who represented the suburban Chicago district before his son. The elder Lipinski told the Chicago Tribune at the time that, “it’s not easy for me to vote against a Democratic president. But do I feel disloyalty? No.”

Democrats like the Lipinskis have all but disappeared from Congress as gerrymandered districts and hyper-partisanship have resulted in more party-line votes.

“It’s going to be a really big test if Democrats raise taxes on those who are more wealthy. I’m sure Republicans are hoping that happens and that it brings some of those party-flipping districts over to them,” Dan Lipinski said of Biden’s bill. 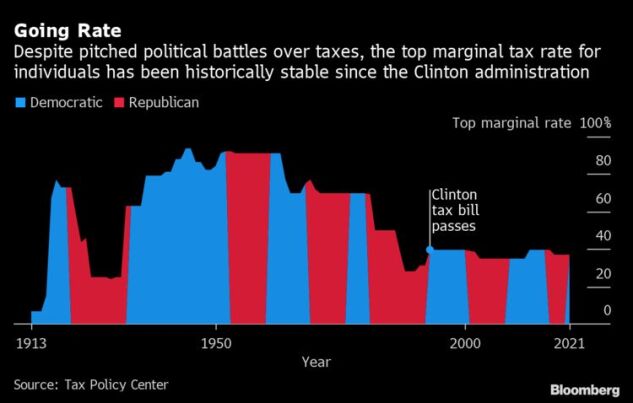 SALT in the Wound

The political realignment has also put Democrats in a new position of bargaining to restore a tax break for their wealthy constituents before they’ll agree to support a higher income-tax rate.

Many Democrats in Congress who won formerly Republican districts campaigned on restoring that deduction. It was a particularly salient issue in New York and New Jersey, where Democrats were able to flip seven GOP seats in 2018.

“I’m not voting for any change in the tax code whatsoever unless there’s the restoration of the SALT tax deduction. I’m laying that chit on the table,” Suozzi said.

Nearly two dozen other Democrats, including 17 New York Democrats and New Jersey Representatives , , and Malinowski, have set the bar in the same place. But they’ve also suggested the issue is important enough that they would trade a higher income tax rate if it included more broad-based tax relief, like lifting the SALT cap.

So it’s possible that the solution would be to raise the cap but not eliminate it entirely. “We have to do something about SALT or else I can’t be for it,” Malinowski said. “I think the administration understands that.”

To contact the reporter on this story:
in Washington at gkorte@bloomberg.net

To contact the editors responsible for this story:
at wbenjaminson@bloomberg.net